It is a comment on the isolation of the farther reaches of the Riverina that Hillston is the largest town in Carrathool Shire. In reality it is a small country service centre on the Lachlan River providing for the surrounding wheat and wool district. It is surrounded by impossibly red and fertile soils and this, combined with access to a high quality artesian basin has resulted in extensive cotton growing, fruit and vegetable cultivation and vineyards.

Hillston is 684 km west of Sydney via Yass, Temora and Griffith.It is situated on the Lachlan River 123 metres above sea-level.

The local Aborigines, the Wiradjuri, called the area 'melnunni' meaning 'red soil' and a local stockman, William Hill, when he opened an inn gave this a distinctly English twist and called his pub The Redbank. This became the name of the town until the post office arrived in 1869 and it was found there was another town called Redback. The town's name was changed to Hillston which, it is widely assumed, was a contraction of 'Hill's town', honouring William Hill who had died two years before.

The Cotton Gin
If you've never seen a cotton gin in action they are always worth inspecting. Check the Visitor Information Centre for opening times. Obviously it doesn't operate all year round.

Heritage Walk and Hillston Museum
The Visitor Information Centre has brochures which outline all the buildings of historic interest in the town. As well they can provide information about the local museum on Keats St. It is a typical local museum with an extensive collection of historic agricultural equipment. It is open by appointment (02 6967 2283 or 02 6967 2175).

Hillston Lake
Located at the northern end of the town, Hillston Lake is an artificial water supply which the townsfolk use for waterskiing while enjoying barbecues and walking on the shoreline. A swinging bridge at Hughie Cameron Park in High Street provides access to the reserve and nature walk on the southern side of the Lachlan River. At certain times of the year the lake, which is a nature reserve, is alive with birdlife.

Willandra National Park
Willandra National Park is located 73 km north-west of Hillston and 61 km from Mossgiel. The park is part of the old Willandra station which once spread across the flat lands between Hillston and Mossgiel. It was established in the 1870s on a 100-year lease and by the 1890s it had become an important merino stud. It was returned to the state government and in 1972 was gazetted as a national park.
Willandra National Park covers nearly 20 000 ha and lies at the northern edge of the Riverina plain.
The Willandra homestead precinct includes the gardens around the house (both formal and ornamental), wide verandas to protect from the harsh summer sun and a thatched ramshed. It now houses a photographic display covering the pastoral and natural history of the district. There are also the shearing precinct (approximately 1.5 km from the homestead) with its woolshed, overseer's cottage, shearer’s quarters, ablution blocks, dining room and kitchen as well as the cook’s cottage and meat house. All these buildings date from the golden age of wool from 1910 to the 1930s.
There is a pleasant walk in the park. The Nilla Yannagalang Billana walk (5km, 2 hours). The words are Wiradjuri for “walking along together”. The track follows the course of the Willandra Creek and can be accessed from the homestead precinct.
It’s an easy walk (most of the park is very flat) through black box woodland interspersed with openings of black bluebush shrubland. If there’s water in the creek, expect to see waterbirds such as egrets, herons, spoonbills, cormorants and ducks. Check out http://www.environment.nsw.gov.au/NationalParks/parkCultExplore.aspx?id=N0037 for additional historic information.

* The Hillston district was once occupied by the Wiradjuri Aborigines who arrived in the area over 45,000 years ago. In Willandra National Park near Halls Lake there are remains of oven hearths, stone flakes and broken pieces of grinding dishes which date back many thousands of years.

* The first European into the district was William Hovell who established the 'Bellingerambil' run which was formally licensed in 1848.

* Hillston was established in 1863 when a stockman, William Hill, from Roto station, opened an inn where the town now stands. He called it The Redbank which became the unofficial name of the town. When the town's post office opened in 1869 it was called Hillston to avoid confusion with another postal district called Redbank. A number of the streets were named after English poets. Check out Milton, Keats, Byron and Shelley streets.

* By 1870 two separate towns had developed as a land owner named John McGee attempted a private subdivision of his land. The rich red soils ensured that land sold well and farmers began to grow wheat.

* A major change to the district occurred when the railway arrived in 1923. With rapid access to markets this resulted in many new settlers particularly wheat-growers from Victoria.

There is a useful local website - http://www.carrathool.nsw.gov.au and specific information about Hillston can be accessed by going to About the Shire and Tourism in Carrathool Shire. 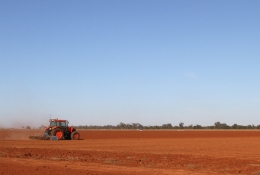 A tractor ploughs the rich red soils on the road between Merriwagga and Hillston. 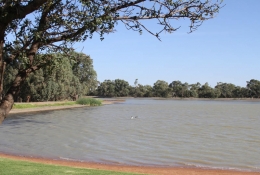 Hillston Lake - an artificial lake - near the centre of the town. 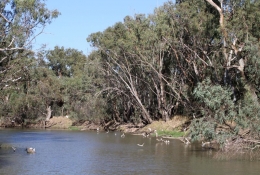 The Lachlan River at Hillston. 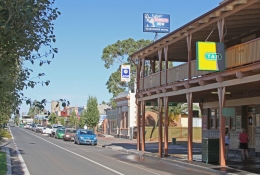