Hinchinbrook is basically two large islands joined by a long sand isthmus which has developed so there is a narrow sandy beach facing south, then a few substantial dunes and a vast, impenetrable mangrove swamp cut by sinuous channels. Promoted as the largest island National Park in Australia, it is the largest island on the Great Barrier Reef. The appeal of the island centres on bushwalkers and people who enjoy the quietness of virgin rainforest and pristine beaches. The channel which lies between the island and the mainland is a flooded river valley and is notable for its extensive areas of mangroves.

Hinchinbrook Island is located 8 km east of Cardwell, 183 km south of Cairns and 165 km north-west of Townsville. A boat across to the island.

Hinchinbrook Island was named in June 1770 by Captain Cook, after the family seat of his patron, George Montague Dunk. Cook could not see the channel which lies between the island and the mainland (now called Hinchinbrook Channel) and so he used the term Mount Hinchinbrook presumably to describe Mt Bowen (Queensland's third highest mountain) or Mount Straloch, the island's two highest mountains. It was not until Captain Phillip Parker King explored the area in 1819 that Hinchinbrook was recognised as an island.

Description of the island
The island is 52 km long, 10 km wide and it covers an area of 39,900 hectares making it the largest island on the Great Barrier Reef. It is essentially an island for walkers and for wilderness lovers who enjoy the quietness of virgin rainforest and pristine beaches.

Hinchinbrook Island National Park
Hinchinbrook Island is a 39,900 ha national park characterised by rainforest and mangroves. Promoted as the largest island National Park in Australia it is 52 km long, and 10 km wide. Hinchinbrook has been protected since 1932. It is primarily for walkers and for people who enjoy the quietness of virgin rainforest and pristine beaches. The channel which lies between the island and the mainland is a flooded river valley and is notable for its extensive areas of mangroves and its seagrass beds which are home to dugongs. It is also home to estaurine crocodiles, box jellyfish and green turtles. Off the coast it is possible to sight humpback whales between May and September.  The National Parks website describes the island as "renowned for its range of habitats including misty, heath-covered mountains sandy beaches, paperbark and palm wetlands, and extensive woodlands. Patches of lush rainforest and eucalypt forest descend to a mangrove-fringed channel in the west, with sweeping bays and rocky headlands along the east coast. The island’s mangrove forests are some of the richest and most varied in Australia and are an important breeding ground for many marine animals." Campsites, toilets and boardwalks have been placed strategically along the trails to make the journeys easier. For details about the island, and for maps, check out https://www.npsr.qld.gov.au/parks/hinchinbrook/about.html.
There is a detailed and downloadable brochure at http://www.cardwelltourism.com/wordpress/HLMAC-Marine-Wonders-Booklet_2014.pdf. The Hinchinbrook Resort, a delightful timber eco-friendly resort at the northern end of the island, was severely damaged by Cyclone Yasi and has not been reopened.

Thorsborne Trail and Walking on Hinchinbrook Island
There are four tracks on Hinchinbrook Island - The Haven Track (a short 1 km track from the Haven campground); the Macushia to Cape Richards Track (4.9 km one way which starts at the North Shepherd Bay beach); South Shepherd Bay Track (5 km return which passes through forests and along the beach). Each track is described in great detail at https://findapark.npsr.qld.gov.au/parks/hinchinbrook/journeys. There are also maps.
Most importantly there is the internationally known Thorsborne Trail which is a difficult, 32 km one way track which usually takes around four days. The trail passes through rainforest, open eucalypt forest, banksia forest, and mangrove and paperbark country as it traverses the east coast of the island. Check out https://www.npsr.qld.gov.au/parks/hinchinbrook-thorsborne and https://findapark.npsr.qld.gov.au/parks/hinchinbrook/thorsborne-trail-track for details. There is also a useful 8 minue video which traces the track - check out http://www.hinchinbrookislandcruises.com.au/hinchinbrook-island-cruises/thorsborne-trail-transfers-2/thorsborne-trail-videos.

How do visitors access it?
Access to the island is by boat from Cardwell. Check out http://www.hinchinbrookislandcruises.com.au for details of times and prices. There are also day cruises to the island which are offered by Hinchinbrook Island Cruises.

Activities on the island
Bush walking, swimming, snorkelling, camping. The island is essentially a national park and, as such, visitors need to take all they require if they are planning to camp.

Staying on the Island
The Cardwell Rainforest and Reef Visitor Information Centre, located near the jetty at Cardwell, can give advice on walks on the island, tel: (07) 4066 8601. Campsites, toilets and boardwalks have been placed strategically along the trails to make the journeys easier. Boats can be hired for those people who want to sail over to the island for a day.

* Prior to the arrival of Europeans the island was inhabited by the Biyaygiri Aboriginal people. There is evidence of shell middens and fish traps.

* Hinchinbrook Island was sighted and named in June 1770 by Captain James Cook who did not realise it was an island.

* In 1815 Lieutenant Jeffreys, sailing the HMS Kangaroo, made contact with the Biyaygiri people.

* In 1819 Captain Phillip Parker King explored the area and identified it as an island.

* In 1843 Captain Blackwood sailing the HMS Fly confirmed King's observation that it was an island.

* In 1864 settlement started at Cardwell across the Hinchinbrook Channel.

* In 1874 Reverend Edward Fuller unsuccessfully attempted to set up a mission on the island.

* The Hinchinbrook Island Wilderness Lodge was closed in 2010. It had been partly destroyed by Cyclone Yasi.

There is no accommodation on the island. There are camping sites.

There are no eating facilities on the island. 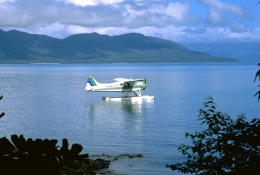 Looking across the Hinchinbrook Channel to the mainland from Hecate Point 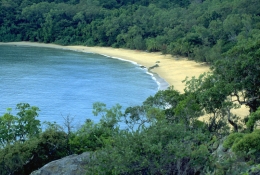 The beach near Hecate Point 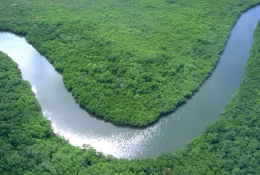 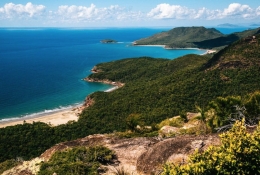