Historic township on the Hunter Valley floodplain north-east of Morpeth.

Located on the rich floodplain 4 km north-east of Morpeth, the tiny village of Hinton lies on the banks of the Hunter River at the point where the Paterson River joins the meandering major stream. The village has two points of genuine interest - the charming Victoria Hotel and the historic liftspan Hinton Bridge across the Paterson River.

Hinton is located 4 km from Morpeth, 38 km from Newcastle and 169 km from Sydney.

"Hinton", is an Old English word meaning "high settlement" or "high enclosure" which certainly does not apply to this low-lying village. It is likely the town was named after a pub which was called the Hinton Inn.

Hinton Bridge
The Hinton Bridge crosses the Paterson River just upstream from the Hunter River. It is located 4 km from Morpeth.  The Heritage Council of New South Wales explains that it was: "Completed in 1901, Hinton Bridge is an Allan timber truss road bridge and it is one of only three lift bridges in the Hunter region, which in the past accommodated river steamers that travelled the Hunter River system. As a timber truss road bridge, it has many links with important historical events, trends and people, including the expansion of the road network and economic activity throughout NSW, and Percy Allan, the designer of this type of truss." It was opened to allow shipping to pass up and down the Paterson River in 1901. Check out http://www.environment.nsw.gov.au/heritageapp/visit/ViewAttractionDetail.aspx?ID=5051372 for more information.

Victoria Hotel
Just across the bridge at 2 Paterson Road, on the corner with Old Punt Road, is the Victoria Hotel which was built in 1840 and is now one of Australia's oldest continually licensed hotels. As its name suggests, Old Punt Road once led down to a punt by the junction of the Paterson and Hunter Rivers which connected Hinton with Morpeth. The hotel's website is http://www.victoriahotelhinton.com.au, tel: (02) 4930 5260.

Hinton Public School
Located on Paterson Road is the Hinton Public School which was established in 1848. It was the fourth public school to be built in New South Wales under the National School System. The oldest building of the complex dates from 1877 and is located beside the road.

Historic Buildings in the Village
There are a number of historic buildings in the village (most of them along Paterson Street) including St John The Evangelist Anglican Church (c.1864) which is located on Paterson Street and has an historic cemetery behind it; the Baptist Church (1857) which is in Elizabeth Street behind the Primary School; the former School of Arts (1869) which has been beautifully renovated and is on Hinton Road, and the Hinton Pioneer Cemetery which is a little further along Hinton Road.

* Prior to the arrival of Europeans the area was home to the Worimi Aboriginal people.

* This area was originally known as Paterson's Plains, which stretched along the northern bank of the Hunter from the nearby junction of the Hunter and Paterson Rivers south-west to the area now known as Bolwarra. The first permanent settlers were 12 ex-convicts authorized in 1818. Another 11 were allowed on the other side of the river at Wallis Plains.

*  Hinton came into existence as the result of a land grant made to the merchant R.C. Dillin in 1823.

* The rich alluvial soil made the area ideal for crop farming. Produce was being shipped to Sydney as early as 1824.

*  The village came into existence through the subdivision of Dillin's property in 1840. That year saw the opening of the Victoria Hotel.

* The town had declined in importance by the end of the 19th century.

* The village was isolated by flooding in 2000.

* The village was isolated again by flooding in 2007. 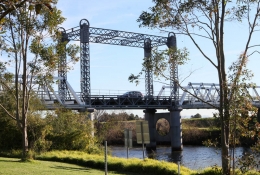 The Hinton Bridge (1901) across the Paterson River. 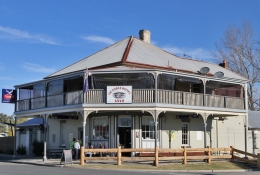