Until 2013 Holbrook was one of the last towns not bypassed by the Hume Highway. Traffic would slow down, pass through on its long straight street, and watch as the bypass was being built. The roar of trucks deprived the town centre of any appeal although it had a number of significant historic buildings and there were quality cafes serving light meals and good coffee. Today Holbrook's primary function is a stopover and rest destination where the huge HMAS Otway can be inspected and walked over and the local park beside the Otway is ideal for picnics and an extended rest break.

Holbrook, which is 262 m above sea level, is located 494 km south-west of Sydney and 384 km north-east of Melbourne on the Hume Highway between Gundagai and Albury.

Holbrook has changed its name at least five times. When the explorers Hume and Hovell passed through the area in 1825 they named it Friday Mount and Camden Forest. By 1836 it was known as Therry's or Billabong after the Rev John Therry. By 1838 it was known as Ten Mile Creek and by 1858 it had changed again and was known as Germanton. A map produced in 1860 named it Kings after the local pub, King's Public House, but in 1876 it was officially gazetted as Germanton. As with many Australian towns which smacked of some connection with Germany, it was changed again in 1915 to Holbrook after Submarine Commander Norman Douglas Holbrook.

Submarine Park and Replica Submarine
At the corner of Albury Street and Wallace Street this town that loves submarines has an 8.5 m replica scale model of the 43 m British B11 submarine that Lieutenant Norman Douglas Holbrook piloted through the minefields off the Dardenelles to torpedo a Turkish battleship in December, 1914. The craft, operated by a battery-driven electric motor, was limited to six knots for two hours and it was extremely difficult to handle.

After Holbrook sunk the battleship the B11 came under fire, the compass was shattered and it took nine hours to escape the attack. Remarkably none of the crew were injured. As a result of the success Holbrook became the first member of the British Navy (and the first submariner) to receive the Victoria Cross. The full story is recorded at http://www.anzacsite.gov.au/5environment/submarines/holbrook.html. It is a remarkable story.

Submarine Museum
Located in Submarine Park, just behind the HMAS Otway, is the Submarine Museum which includes a large collection of submarine memorabilia including uniforms and photos; a submarine control room with periscope; an audio visual display area and an exhibition relating to Lieutenant Holbrook. For more information check out http://holbrook.nsw.au/AboutHolbrook/VisitorInformationCentre/tabid/421/Default.aspx or tel: (02) 6036 2422, Open daily from 10.00 am - 4.00 pm.

HMAS Otway
The HMAS Otway, a 90-metre submarine, dominates the townscape. It is impossible to miss as you drive down the main street. In 1995 the submarine's fin was gifted to the town by the Royal Navy. Slowly the vessel's outer skin was acquired to reinforce the town's submarine theme. It was financed by public donation and by a $100,000 gift from Holbrook's widow, Mrs Gundula Holbrook. There was not enough money to buy the complete submarine so only the outer skin was acquired. The boat was shipped to town in sections by semitrailer then reconstructed in the Submarine Precinct. It was dedicated in 1997. Today it is a popular attraction for both adults and children who can walk along its deck.

Historic Buildings and Grimwoods
There are a number of interesting historic buildings in town. Of particular interest is Grimwoods Store (further down Albury Street on the western side) with its proud boast "Everything sold here". It is a replica of the first store built in Germanton and for over two decades it has sold locally made arts and crafts. Over the road are three impressive buildings (one of which is the National Museum of Australian Pottery) which have been classified by the National Trust.

Ian Geddes Walk
The starting point for the Ian Geddes Walk is located behind Grimwoods. It follows Ten Mile Creek away from Albury Street into a tranquil bushland domain. The entrance features a shelter with a map of the walk and the names and pictures of the birds which you are likely to observe along the trail. The walk can be comfortably completed in half an hour.

National Museum of Australian Pottery
Located on Wallace Street the Pottery Museum is dedicated to 19th and early 20th century Australian pottery. It has over 1,500 pieces on display and "Amongst the extensive range of pottery wares, such as simple preserving jars, jugs, colourful cheese covers, beautiful bread plates and elegantly decorated water filters are a few rare examples of pottery made by the convict potter Jonathan Leak, who’s few surviving pieces are the earliest marked pottery produced in Australia. Also on display are over 100 original photographs, showing the interior and exterior of many potteries, exhibition displays and portraits of the potters along with catalogues, price lists and numerous old advertisements." It is not always open and it is advisable to call (02) 6036 3464 to determine opening times. Check out http://www.australianpottery.net.au/ for more information.

Ten Mile Creek Gardens and Miniature Railway
Located beside the National Museum of Australian Pottery, in Hay Street, are the Ten Mile Creek Gardens - a peaceful retreat for tired travellers with picnic facilities. Each Sunday during the school holidays and on the 2nd and 4th Sundays at other times, between 10.00 am - 4.00 pm, a delightful train on a miniature railway runs through the gardens.Contact (02) 6036 2253 or check out http://www.holbrook.nsw.au/AboutHolbrook/Attractions/HolbrookMiniatureRailway/tabid/419/Default.aspx for more details.

Woolpack Museum
A little further south is the Woolpack Inn Museum at 83 Albury St. It is located in the Criterion Hotel which was built in 1895 . The upper storey was added in the 1900s. It is huge with a total of 22 rooms which, if you want to inspect them in detail, will take you around two hours. There is a schoolroom, the complete plant of an old cordial factory, a bakery and other items of local interest, including documents relating to Lieutenant Holbrook. Outside is a large collection of horse-drawn vehicles and farm machinery. There are times when the volunteers dress up in heritage costumes. It is open daily from 9.30 am to 4.00 pm, tel: (02) 6036 2131.

* Prior to European settlement the district around Holbrook was occupied by the Wiradjuri people.

* On 10 November, 1824 the explorers Hume and Hovell passed through the district on their overland trek to Port Phillip Bay.

* By 1838 the location was known as Ten Mile Creek. In this year the German-born Johann Pabst, a sheep expert with the Australian Agricultural Company, became Holbrook's first settler.

* By 1840 Pabst was the licensee of the Woolpack Inn on the southern bank of Ten Mile Creek. Other inns followed.

* The settlement became known as 'The Germans' and a town reserve was declared in 1848.

* By 1858 a town site had been surveyed, land sales had commenced and the local telegraph office was named 'Germanton'.

* By 1860 some maps were referring to it as Kings after King's Public House.

* In 1876 the name Germanton was officially gazetted.

* The railway passed through the district in 1883.

* Following the outbreak of war in 1914 a number of local meetings were held to try and change the town's name from Germanton.

* The town's name was officially changed on 24 August, 1915 to honour Submarine Commander Norman Douglas Holbrook who had recently become the first submariner to receive the Victoria Cross after he piloted his submarine through rows of mines off the Dardenelles and torpedoed a Turkish battleship. After the war Holbrook visited the town on three occasions.

* In 1995 the Royal Australian Navy gifted the fin of the HMAS Otway. The rest of the vessel's outer skin was acquired by generous local donations.

* Today the town lies at the heart of a rich agricultural area which produces wool, wheat and other grains, lucerne, fat cattle and sheep. 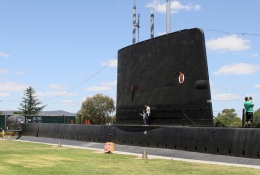 Children (and their parents) love clambering over HMAS Otway. 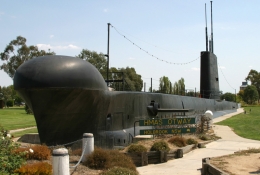 The HMAS Otway moored in the park at Holbrook. 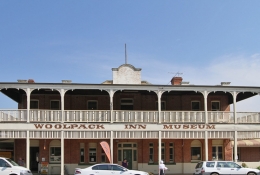