Hopetoun is an attractive seaside village located on the shores of Mary Ann Harbour. It is popular as a low key get-away-from-it-all tourist destination and its holiday appeal has been greatly enhanced by whale watching, the presence of seals and dolphins and the untouched nature of the beaches and headlands in the area. It is impossible to overstate the beauty of glorious and pristine area. To many people this stretch of coastline is the most beautiful in Australia with its white sand beaches and gently rounded rocky foreshores.

Hopetoun is located 575 km south-east of Perth via Route 40.

The harbour, and the subsequent settlement, were named Mary Ann after a cutter named Mary Ann. The cutter had been named John Thomas, a whaling master, after his eldest daughter. When the town was surveyed in 1900 its name was changed to Hopetoun in honour of Australia's first Governor General, Lord Hopetoun.

Fitzgerald River National Park
The beautiful Fitzgerald River National Park, which covers 297,244 ha of coastline between Bremer Bay and Hopetoun, is recognised as one of the largest and most botanically significant national park in the country because it can claim to have nearly 20% of Western Australia's floral species (1883 plant species have been identified, 75 of which are found nowhere else); a superb and diverse landscape which includes plains, breakaways, headlands and impressive white beaches and inlets.
It has four rivers cutting dramatic gorges, wide sand plains, isolated mountains, rugged cliffs, pebbly beaches and spectacular displays of wildflowers between August and October.
In A Park in Perspective by Keith Bradby the appeal of the park is explained: "The park sits astride the incised valleys of four major river systems, which flow south-east to the coast. Dominating the southern section is a low range of rugged quartzite hills known collectively as The Barrens, while the core of the park is an extensive undulating plain ... The flora of the park is exceptionally rich and diverse. Although the Park is only 0.2 per cent of Western Australia's land surface, over 20 per cent of Western Australia's plant species occur there. Many of the plant species are endemic to the region, reflecting the tight and varied plant/soil mosaics. Vegetation varies, from woodland on the richer soils through to mallee and mallee heath.
"There are more recorded species of birds, mammals and frogs than in any other reserve in south-west Australia. This is partly a reflection of the park size, but also because of the blending of wet country and dry country species which occur in the park."
In fact recent research has revealed that the park is home to 22 mammal species, 41 reptile species, 12 frog species and more than 200 bird species including rare species such as the western ground parrot, the western bristle bird and the western whipbird.
The Fitzgerald River NP brochure suggests entry from the east "You can enter the park near Hopetoun via the east entry station on Hamersley Drive, which is sealed to the turnoff to Hamersley Inlet Road. Hamersley Drive provides two-wheel drive access to several eastern precinct coastal recreation sites (see map), including the Hamersley Inlet camp site."
Two roads run off the South Coast Highway to the east of Hopetoun. Hamersley Drive is a sealed road that winds along the coast between the park’s eastern boundary and Hamersley Inlet. This drive takes visitors to Four Mile Beach, Barrens Beach, Barrens Lookout, East Mount Barren, East Mylies, Mylies Beach, Cave Point and West Beach. And Quiss Road runs down to St Mary Campground and the coast at Point Ann and St Mary Inlet. There is a very useful website created by the WA Parks and Wildlife Service. Check out https://parks.dpaw.wa.gov.au/park/fitzgerald-river or tel: (08) 9842 4500. The brochure on the park can be downloaded at https://parks.dpaw.wa.gov.au/sites/default/files/downloads/parks/20140471-FitzgeraldRiverNP_brochure_WEB.pdf and the rangers at the west of the park can be contacted at (08) 9835 5043.

Walks from Hamersley Drive entrance to Fitzgerald River NP
East Mount Barren Summit Trail - a 2.6 km return short walk to the summit of East Mt Barren. It provides exceptional panoramic views over the central park and eastern Barrens Ranges, the Culham Inlet to Hopetoun, and beyond to Esperance.
Barrens Lookout - a very short, 250m return, walk from the car park to Barrens lookout which offers both panoramic views and a superb wildflower display in spring.
Sepulcralis Hill - an easy 600m return to the lookout which offers views over the Hamersley River. Sepulcralis Hill is named after a gum tree (Eucalyptus sepulcralis) which grows in the ridges of this section of the park.
No Tree Hill - a  6 km return walk which is ideal in spring when the wildflowers are in bloom.
Hakea Walktrail from Cave Point to Quoin Head - a long 46 km return walk down the coast which passes through a rich diversity of flora habitats. It is possible to spot echidnas, sea eagles, osprey, mallee fowl, dolphins and whales (in season).

Whale Watching
The coastline of the Fitzgerald River National Park is home to southern right whales during the winter months where they come for protection and to nurture their newborn calves. Whale watching can be productive from the Cave Point (recognised as one of the best spots of the coast) from July to October.

* By the 1820s the whalers and sealers from Van Diemen's Land who hunted in the southern ocean knew of Hopetoun and used it as a stopover point.

* It is believed  that a whaling master named John Thomas settled in the area and named a cutter Mary Ann after his daughter.

* In 1841 Edward John Eyre passed through the area having crossed the Nullarbor Plain. Eyre must have passed very close to the present site of Hopetoun. His journals record that he spent a night at the Jerdacuttup Lakes east of Hopetoun and the following night was camped by 'the Lake', Culham Inlet.

* The area was settled in the late 1860s by the Dunn brothers. It is thought that John Dunn became interested in the area when he became temporarily marooned while sealing off the coast of Mary Anne Harbour.

* Dunn moved into the area in 1868 and spent 'the first three years clearing scrub, building sheep yards and preparing for permanent occupation' on a piece of land he would name 'Cocanarup'.

* While he was clearing the land John Dunn was visited by the explorer John Forrest. Dunn accompanied Forrest's expedition south towards Mary Ann Haven.

* In 1871 John Dunn took three months to overland some sheep from Albany with his brother George.

* John Dunn was killed by local Aborigines in 1880. His grave is located on Cocanarup Road which runs off the South Coast Highway west of Ravensthorpe.

* The real development of Hopetoun occurred when gold and copper were discovered by James Dunn at Phillips River Goldfields near Ravensthorpe in 1898.

* As a result of the gold and copper discoveries the town was surveyed (1900) and its name was changed from Mary Anne Harbour to Hopetoun (in honour of Australia's first Governor General, Lord Hopetoun). It became the port for the goldfields.

* A jetty was built in 1901 and that year a gold battery was shipped through the port.

* The railway which connected Ravensthorpe and Hopetoun was closed in 1925.

* The port at Hopetoun was effectively closed in 1936.

* The Fitzgerald River National Park was gazetted in 1973.

* In 1975 the Peter the Fisherman Catholic Church was consecrated.

* In 1978 the town received a mains water service.

* In 1984 the Hopetoun breakwater was completed.

* In 2002 optic fibre cable was laid to Hopetoun from the highway.

* By 2006 there was major housing development in Hopetoun.

* In 2015 the Hopetoun Community Centre was opened. 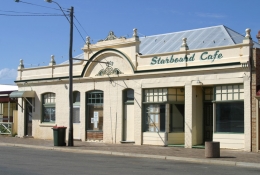 A building in Hopetoun built during the heyday of the gold rush. 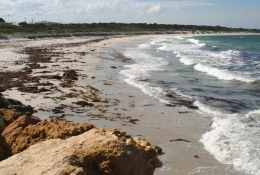 The main beach on Mary Ann Harbour at Hopetoun 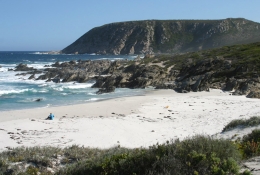 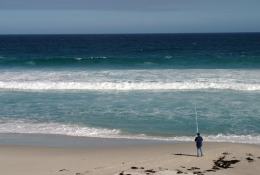 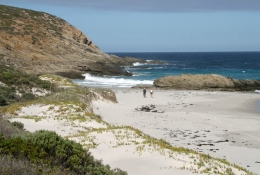 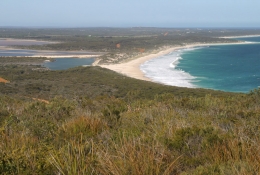 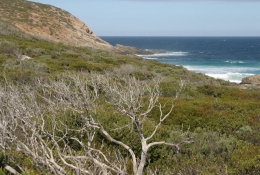 The harsh winds off the Great Southern Ocean bend the trees in Fitzgerald River National Park.