Horrocks (also known as Horrocks Beach) is a town in transition. Once the northernmost of a series of tiny holiday-fishing villages it was untouched by modernity with simple fibro holiday houses, streets which had grown out of the sand dunes, and a simplicity of life which seemed to belong the 1950s. Today, thanks to transportation and a desire to find a piece of paradise "far from the madding crowd", it has an impressive beachfront (parklands, play areas for children, modern facilities) and Glance Street has a number of new, large houses with spectacular, panoramic ocean views. The small population increases dramatically in the crayfish (rock lobster) season and during school holidays. It is a true holiday destination for families, surfers, anglers and birdwatchers. There is the added advantage of the local reef system which encloses the beach making it more like a lagoon.

Horrocks is located 488 km north of Perth, 74 km north of Geraldton and 22 km west of Northampton.

Horrocks was named after Joseph Lucas Horrocks, a convict who was sentenced to 14 years transportation for forgery and arrived in Fremantle in 1852. In Fremantle he worked in the medical section of the convict settlement and, due to a chronic shortage of medical officers in the colony, was appointed medical attendant for the new settlement of Port Gregory in 1853. He was given an unconditional pardon in 1856 and spent the rest of his life (he died in 1865) working in the Northampton-Champion Bay area running a store, agitating for improved conditions for convicts, and building a non-denominational church in Northampton. Horrocks was originally known as Three Mile Beach.

Horrocks Beach
The excellent Surf Lifesaving site (https://beachsafe.org.au/beach/wa/northampton/horrocks/horrocks) notes of Horrocks Beach that it is a "sheltered curving 2.5 km long beach which has formed to the lee of a 5 km long attached northwest-trending reef, with the beach curving to the north to form a lagoon which widens to 500 m. Waves break heavily on the reef where they produce a heavy lefthand surf break, with low wave to calm conditions at the shore and a reflective beach. A gap in the reef towards the northern end of the beach is used by the fishing boats and also permits low waves to reach the shore along the northern section. The town backs the southern end of the beach, with vegetated foredunes to the north grading into active transgressive dunes."

Water activities and Fishing
Horrocks is primarily a holiday destination and is known as being ideal for swimming, fishing, surfing, snorkelling, whale watching, diving and windsurfing. Anglers can expect to find tailor, whiting, skipjack, herring, garfish and snook off the beach and near the Bowes River estuary. Fishing from boats usually focuses on dhufish, schnapper, cod, mackerel and groper.

Wildflowers in the District
In spring and early summer the area is alive with wildflowers. The area around Northampton is known as one of the state's premier wildflower districts. The local website notes: "Northampton boasts a wonderful array of beautiful and colourful wildflowers in season including exquisite orchids such as the donkey, bee, cowslip and the rare greenhood orchid. Spectacular fields of pink everlastings and yellow pom poms are easy to find amongst the Northampton countryside and the sand-loving Kangaroo Paw can also be found here. These are just a few of the magnificent range of wildflowers you will find when visiting the Northampton region.
"The more popular wildflower spots are the Yerina Springs Road, West Binnu Road and Ogilvie sandplain, 25 kms North of Northampton. Or head South to Oakabella or inland via the Chapman Valley Road to see a diverse and vivid exhibition of wildflowers in bloom."
When planning a trip there are a number of very simple rules to follow so you can see the wildflowers at their most spectacular.
(1) Start by downloading Your Holiday Guide to Western Australia’s Wildflowers at http://www.westernaustralia.com/en/things_to_do/forest_and_flowers/pages/wawildflowers.aspx#/. It is a comprehensive guide to the wildflowers. There are over 12,000 species and 60% of them are found nowhere else on the planet.
(2) There is a tendency to say "But I won't know what I'm looking at" but that is rubbish. There are a number of great books and the best, by far, is the answer to "Wildflowers for Dummies" titled Colour Guide to Spring Wildflowers of Western Australia. It is privately published by Wajon Publishing Company, written by Eddie Wajon, and comes in three volumes – 1. Kalbarri and the Goldfields, 2. Perth and the Southwest and 3. Esperance and the Wheatbelt. They can all be purchased online from Kings Park & Botanic Garden in Perth. Check out https://www.aspectsofkingspark.com.au. The relevant one for this area is 1. Kalbarri and the Goldfields.
The publication's design masterstroke is that the flowers are listed according to their colours and all the pages are colour coded. Thus Mr and Mrs Wildflower Illiterate, when gazing at a Spiny Synaphea, only need to open at the "yellow flowers" section and flick through until they find the colour photo which matches the reality. The company can be contacted directly on (08) 9310 2936.
(3) No one should ever underestimate the power of local knowledge and assistance.
The best starting place, if you want to get a good foretaste of what you are about to experience in the wild, is to visit Kings Park & Botanic Garden in the heart of Perth. Apart from offering sensational views over the Swan River and the Perth CBD the gardens boast a 17 hectare area which has more than 1700 native species of wildflowers. This is, not surprisingly, rather pristine and not very wild but it does allow you to develop a working knowledge of devils pins, kangaroo paws, desert peas, everlastings, starflowers, grevilleas, firebush, a range of orchids and hundreds of other natives.
You really don't need to be a flora expert. All you need are your eyes and a sense of wonder because the Western Australian wildflowers in spring really are as remarkable and significant as a unique part of Australia as Uluru, the Great Ocean Road or Cradle Mountain.

Willigully Caves
Located near the junction of Horrocks Road and Bowes River Road, the Willigully Caves are part of the sandstone escarpment carved out by the Bowes River. There are images of stencilled hands on the rocks. Check at the General Store in Horrocks for directions.

* Prior to the arrival of Europeans the area was home to the Nhanda Aboriginal people.

* Grey reported the existence of the Hutt River and in 1841 a government expedition was sent to explore the area. The expedition could not cross the Hutt River sandbars and so they sailed north to a site near modern day Port Gregory.

* On 22 May 1853 F.T. Gregory and Captain J. Johnson sailed into the Port Gregory harbour with 60 ticket of leave men. The plan was to hire the convicts to local pastoralists. Johnson’s brig Leander ran aground and had to be abandoned.

* Joseph Lucas Horrocks, after whom the town is named, arrived at Port Gregory in 1853.

* Horrocks was pardoned in 1856 and spent the rest of his life in the area.

* By the 1870s people living in Northhampton were setting up tents and holidaying on the beach which, at the time, was known as Three Mile Beach.

* In 1926 a road was built from Northampton to Three Mile Beach.

* A camping ground was established in the 1930s.

* In the 1940s Horrocks became a popular holiday destination.

* The name Horrocks was officially adopted in 1964 during the Centenary of Northampton.

* In the 1970s the Northampton Council removed many of the temporary dwellings on the foreshore.

* In 2018 Horrocks Beach won the title of No.1 Mainland Beach in Tourism Australia's Best Australian Beaches.

There is useful information at https://www.australiascoralcoast.com/destination/horrocks. 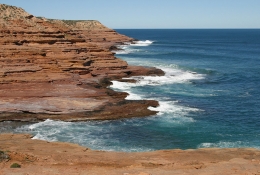 The coastline to the north of Horrocks 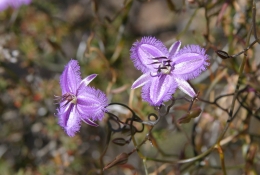 In spring the wildflowers around Horrocks are spectacular 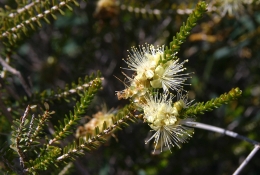 Impressive displays of wildflowers abound in the spring 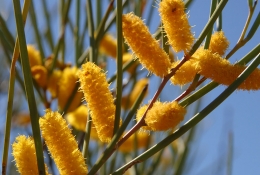 Some areas around Horrocks glow golden with the spring flowers