Major town in the Wimmera.

In his delightful travel book, Following the Equator, the famous author Mark Twain stops at Horsham and offers us a unique description of the town in 1895: "Horsham sits in a plain which is as level as a floor - one of those famous dead levels which Australian books describe so often; gray, bare, sombre, melancholy, baked, cracked, in the tedious long droughts, but a horizonless ocean of vivid green grass the day after rain. A country town, peaceful, reposeful, inviting, full of snug homes, with garden plots, and plenty of shrubbery and flowers".

Today Horsham, located on the Wimmera River, is an attractive city. It is regarded as 'the capital of the Wimmera' and, as such, is a major service and commercial centre for the wheat and sheep, fruit and vegetables, which are grown in the district.

Horsham is located 300 km north-west of Melbourne via Ballarat and Stawell and is 138 m above sea-level.

The local Aborigines, the Jardwa and Wotjobaluk peoples, called the area around modern day Horsham, Wopetbungundilar. They camped beside the Wimmera River and one of their main paths through the district crossed the river where the town now stands. The first European settler, James Darlot, had a fondness for towns in Sussex, England. He called his property Brighton after the English seaside town and named the town that grew up at the river crossing, Horsham, after a town just north of Brighton.

Botanic Gardens
The appeal of the Horsham Botanic Gardens lies more in the fact that they are on the banks of the Wimmera River rather than in any particularly exotic displays. While the gardens were designed in the 1870s by William Guilfoyle, the curator of the Melbourne Botanic Gardens, it is Thomas Brown, curator from 1891-1935, who is celebrated with an unusual piece of vernacular art - a chainsaw carving in a dead sugar gum. The story is that Brown planted the tree in 1895 to celebrate the birth of his son. The tree died and a chainsaw artist, Kevin Gilders, took the stump and created an image of Brown planting the tree out of what was left of the roots.

Horsham Regional Art Gallery
The Horsham Regional Art Gallery is an impressive regional gallery with major works from internationally famous artists including Sidney Nolan, Hans Heysen, Rupert Bunny and George Lambert. The gallery has three focal points: Australian Photography (with works from Frank Hurley, Bill Henson, Tracey Moffatt, Olive Cotton); the Wimmera and the impressive Mack Jost collection. Located at 80 Wilson St, it is open from 10.00am to 5.00pm Tuesday to Friday and Saturday from 1.00pm to 4.30pm, tel: (03) 5362 2888. Check out http://www.horshamartgallery.com.au.

Public Art and Heritage
Horsham prides itself on being an inland city with an impressive array of public art. There is an useful brochure (it can be downloaded at http://visithorsham.com.au/media/uploads/Public-Art-Heritage.pdf) which includes a total of 29 buildings of architectural interest, public spaces and interesting works of public sculpture. Perhaps most impressive is Tim Jones' sculpture Scar Tree which pays homage to an original tree scarred by local Aborigines some time between 1644 and 1784.

Horsham, the Wimmera and Water
Horsham is surrounded by water. The most significant stretches of water include the Horsham Police Paddock at the north of the city, an area of wetlands and a lake known for its excellent birdwatching and its pleasant bushwalks. As well there is Rocklands Reservoir (a part of the Wimmera-Mallee irrigation system - 70 km south of Horsham) which is a popular fishing and boating area with open box woodland on the lake shore. Its attractions include delightful displays of wildflowers in season, Aboriginal rock art and panoramic views.

Toscana Olives
Toscana Olive Plantation is located at 376 Plantation Rd, Laharum (between Horsham and Stawell). See http://www.toscanaolives.com.au/grampians_attraction_farmgate.html for a map and further information. It is considered the largest family-owned organic olive plantation in Australia. The Farmgate is open from 11.00am-4.00pm daily.

* It is believed that Jardwa and Wotjobaluk Aborigines lived in the district before the arrival of Europeans. The called the place 'Wopetbungundilar' which may have meant either 'a place of flowers' (a reference to the wildflowers on the riverbank) or 'a place of feathers' which could refer to a local Dreamtime story about an emu.

* The first European settler in the district was James Darlot who established the 'Brighton' run (named after Brighton on the south coast of England) on both sides of the river in 1842.

* the chief constable for the Wimmera arrived in the town in 1847 and two years later there was a number of log huts - a watch house, courthouse and barracks.

* A store and post office were established in 1849 by George Langlands near a crossing of the Wimmera River which was on a well-established Aboriginal track.

* The 1854 census recorded that Horsham had a population of 57 living in 20 wooden buildings.

* A regular coach service to Stawell commenced in 1862.

* After the goldrushes the Victorian government introduced a Lands Act in 1869 and by the early 1870s the area had been settled and was successfully growing wheat. By 1873 there was a local flour mill. The increase in population saw it leap from 294 in 1871 to 2,678 twenty years later.

The town's official site is http://visithorsham.com.au. It provides extensive information about the town and its attractions. 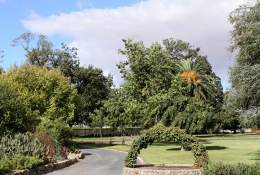 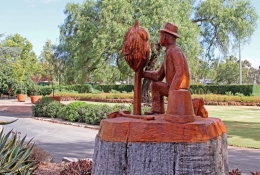 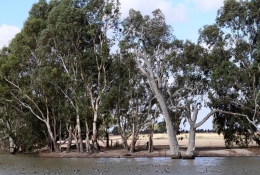 The Wimmera River flows through Horsham