Howard started life as a coal mining town but today it is a small service centre surrounded by sugar plantations and citrus orchards. Neither being on the coast nor being on the Bruce Highway it is a Cinderella in an area where Hervey Bay has become a hugely popular destination with backpackers and people wanting to explore Fraser Island.

Howard is located 281 km north of Brisbane via the Bruce Highway and 28 km west of Hervey Bay.

Howard was named after William Howard who arrived in Maryborough in 1857, explored the local countryside and is credited with discovering the Howard coal field in 1876.

Brooklyn House
The Fraser Coast Regional Council website explains the importance of this National Estate listed building as: "Built for William Rankin by Howard carpenter, Stephen Ward, in 1890. Rankin came from Scotland in 1884 as manager of Queensland Colliers Limited coal mine. Originally set on 3 acres of land with gardens, formal drives, bowling green and tennis court. A gate connected the garden to the local Anglican churchyard next door. The house was the centrepiece of social life in Howard in its heyday and is famous for its association with Dame Annabel Rankin, who became the first female senator in Queensland and is recognised as a pioneer in Australian women's politics. She was a successful State and Federal parliamentarian who, after representing the electorate of Burrum for many years in the Queensland State Parliament, became a Liberal Senator for Queensland from 1946-71. During her long career she was variously Opposition Whip, Government Whip and Minister for Housing before accepting the appointment of Australian High Commissioner to New Zealand.
"It is an elite country house built in Colonial style with modifications over the years. High set on timber stumps. Hip iron roof. Encircling 9 foot verandas on three sides. Timber frame; 8 pine chamferboard cladding. Interior of red cedar. English beech woodwork and marble fittings. Grand front porch extension with double steps. French doors leading into rooms. Four bedrooms, two bathrooms, sitting and dining room, study, sun room, kitchen with servants eating room; upstairs laundry and attic. Rail balustrades; ornate veranda brackets and decorative fretwork in apex of each gable. Two marble fireplaces and 2 chimneys. Sympathetic garden setting but modified since Rankin ownership." Check out http://www.frasercoast.qld.gov.au/documents/4362881/41247949/Place%20ID%20005%20-%20Brooklyn%20House.pdf for more details.
The house was offered for sale in 2016 for $700,000 and the real estate agent, eulogising about its history, added "Sublimely positioned amongst 3.5 tropical acres of landscaped gardens this massive 90 sq. home includes six luxurious bedrooms, 14 foot ceilings, smoking room, grand lounge and formal dining room each with elegant open fireplaces. Farm-style cooks' kitchen opens onto casual dining and 100 foot long verandahs, just perfect for an afternoon siesta - perhaps followed by a refreshing gin and tonic. Richly decorated with beautifully restored period furnishings throughout - much of which are included in the sale. A glorious family home or new owners can profit from an existing income stream. Brooklyn House is currently licensed as a café and restaurant tourist attraction with established coast tours and is ideally structured to become a luxurious B & B and functions venue."

St Matthews Church
Located next door to Brooklyn House, the original St Matthews, the only Anglican church in the district, was built in 1883 on land donated by Willliam Rankin. It was replaced by the current structure in 1913. During World War II it was used as a field hospital. It was finally closed in 2016. In 2015 the local paper, the Fraser Coast Chronicle, noted "The peeling paint on this little timber church belies its well-kept interior. Its stained glass windows depicting the Church's namesake, St. Matthew, overlook the altar draped in crisp, white linen, neat rows of wooden pews and gleaming polished plaques bearing the names of long-past parishioners. An aura of warmth pervades, no doubt from the love of many generations who have been a part of this welcoming church."

Burrum & District Museum
Located just behind the main street of Howard and open from Tuesday and Wednesday from 9.00 am - noon and Saturday 8.00 am - noon, the Burrum & District Museum "incorporates the collections of the former Torbanlea Mining Museum and the Howard Museum and is run by the Burrum and District Heritage Society Inc. in conjunction with Hervey Bay City Council's Museums Support Officer. The primary aim of the Museum is to collect, preserve, exhibit and interpret objects of natural and cultural significance to the Burrum District. A particular emphasis is placed on the following themes:
1. Historical development of the townships & settlements of the Burrum District;
2. Mining history specifically linked to the Burrum Coal Fields.
The museum provides a venue for colection development combined with storage of documentary and photographic collections, and be the focus of research, exhibition and collection development activities." For more information tel: (07) 4129 0677.

Toogoom and Burrum Heads
Nearby, at the mouths of the Isis and Burrum Rivers, are the quiet seaside resort towns of Burrum Heads and Toogoom which have become popular retirement haunts far removed from the bustle of the towns along the Sunshine Coast to the south.

* Prior to the arrival of Europeans the area was inhabited by the Gubbi Gubbi Aboriginal people.

* William Howard, after whom the town is named, moved into the area in 1857. He explored the surrounding area.

* Miners had moved into the area by 1864 when a seam of coal was discovered on the banks of the Burrum River.

* In 1876 William Howard discovered the local coalfield which led to the opening of the Whitley Colliery in 1877.

* A Primitive Methodist church was opened in 1884.

* The town's most famous building, Brooklyn House, was completed in 1890.

* The local Catholic church was consecrated in 1895.

* The Howard Power Station, fuelled by the local coal, was opened in 1951.

The University of Queensland site on Howard has detailed information about the town's history. Check out http://queenslandplaces.com.au/howard. 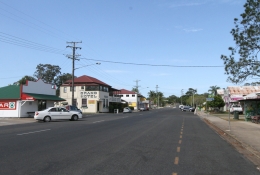 The main street of Howard. 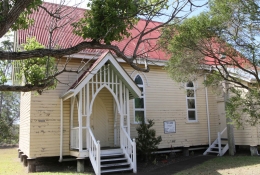 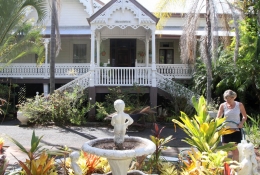