Humpty Doo, with a population of over 5,000 and a location only 38 km from the centre of Darwin, has effectively become a commuter town on the road to Kakadu National Park. Once known for its attempt to turn the tropical north into a verdant garden for fruit and vegetables, it is now is a combination of market gardening (mostly for Darwin), commercial agriculture and tourism for visitors travelling to Kakadu.

The town takes its name from a station (property) in the area which was named "Umpity Doo". No one knows why the station was given that name. 'Humpty doo', probably coming from 'Humpty Dumpty', was an expression in Australian vernacular meaning "upside down" and there is a suggestion that there was a Woolna Aboriginal word, "undid" meaning "resting place" but no one is certain.

Big Boxing Croc
As Humpty Doo has evolved into a commuter town for people who work in Darwin, the Big Boxing Croc has become a very identifiable icon. It stands 13 metres high, wears a pair of red boxing gloves, and was inspired by the "Boxing Kangaroo" logo used in Australia's successful 1983 bid for the America's Cup. At the time it was horrendously expensive. The crocodile was the brainchild of Marshall Brentnall who was running the Humpty Doo Bush Shop. In 1987 he commissioned a Sydney company to build the Big Boxing Croc out of fibreglass. The challenge was to build something that was strong enough to stand the full savagery of tropical cyclones. This may explain why the big croc cost a staggering $137,000.

Fogg Dam Conservation Reserve
Located 22 km along the Arnhem Highway is a turnoff to Fogg Dam (it is a further 7 km to the north). The dam was constructed in the 1950s as part of the Humpty Doo rice project and when the project failed it became a bird sanctuary, particularly during the dry season. Not surprisingly the birds had already started to use the dam. Access is across the low dam wall which can be blocked during heavy rains.
There are three birdwatching walks in the reserve:
Woodlands to Waterlilies Walk (2.2km, easy, 45 minutes) which leads through the woodlands on the edge of the dam.
Monsoon Forest Walk - (2.7 km, 90 minutes, easy) which heads out onto the floodplain.
Pandanus Lookout - with views over the dam.
There is an excellent and downloadable brochure at https://nt.gov.au/leisure/parks-reserves/find-a-park/find-a-park-to-visit/fogg-dam-conservation-area which includes a map and information about the walks in the reserve.

Window on the Wetlands Visitor Centre
Located 60 km from Darwin and perched on the top of Beatrice Hill on the Arnhem Highway, the Window on the Wetlands Visitor Centre offers a view over the Adelaide River wetlands from an elevated position on the top floor of the centre. The Parks & Wildlife brochure explains: "From the top floor of the Centre enjoy superb views across the floodplains, especially during the early morning or late afternoon. Wet season views of the flooded wetlands can often be accompanied by spectacular lightning storms - for more information tel: (08) 8988 8188. See https://darwintour.com.au/attractions/window-on-the-wetlands for more information.

Humpty Doo Uniting Church
Located off the Arnhem Highway at 15 Challenor Circuit, the Humpty Doo Living Water Uniting Church is a comment on the temperature and humidity of the area: it is an unusual open air church without walls.

Adelaide River Jumping Crocodile Cruises
For over 25 years Adelaide River Cruises, which are located 30 km east of Humpty Doo on the Arnhem Highway, have been offering tours up and down the Adelaide River from near the bridge where the highway crosses the Adelaide River. The tours, which operate four times a day between May and November and carry only 30 people, have become famous for the "Jumping Crocodiles". The crew feed the crocodiles and the crocodiles have become used to this free feed and will actually swim out to the boat. The crocs jump (they have been known to lift themselves right out of the water) for pieces of meat which are lowered on rods from the side of the boat.
The Adelaide River at this point is a typical tidal river and crocodiles abound on its muddy shores. As well it is common to see buffalos, jabirus, sea eagles, kites, snakes and a variety of other wildlife during the tour. Check out https://adelaiderivercruises.com.au.

* Prior to the arrival of Europeans the area around Humpty Doo had been occupied by the Woolna Aboriginal people for at least 40,000 years.

* The first European into the area was Boyle Travers Finniss who explored the Adelaide River area in 1864.

* In the 1870s and 1880s the German botanist Dr. Maurice Holtze carried out experiments in Darwin exploring the region's ability to grow tropical crops.

* By the 1880s Chinese farmers, serving the Chinese miners on the Pine Creek goldfields to the south, were growing rice around Humpty Doo.

* In 1954, after considerable CSIRO experimentation, a joint Australia-US company known as Territory Rice Ltd was established. It planned to irrigate the plain of the Adelaide River and produce a commercial rice crop.

* In the mid-1950s the RAAF Airfield Construction squadron built Fogg Dam to provide water for the Humpty Doo Rice project.

* By 1959 the rice paddy fields had been abandoned. That year Fogg Dam became a Bird Protection District.

* In 1962 Territory Rice forfeited the land to the government.

* In 1971 the Humpty Doo Hotel-Motel opened for business. 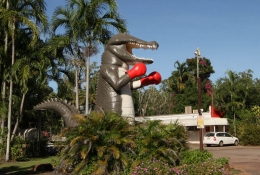 The Big Croc - a distinctive symbol on the road to Kakadu National Park. 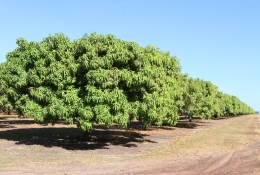 The first agricultural experiments may have failed but today the district is rich in productive orchards. 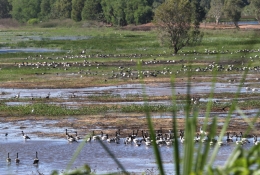 The birdlife on Fogg Dam, now a bird sanctuary, is little short of amazing. 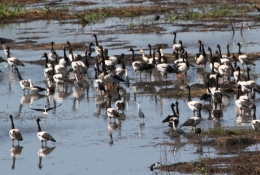 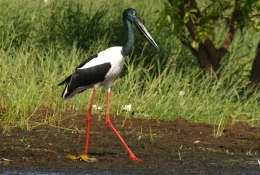 A jabiru walking along the shore of Fogg Dam. 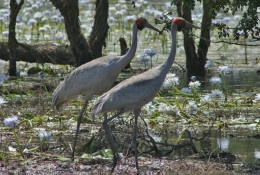 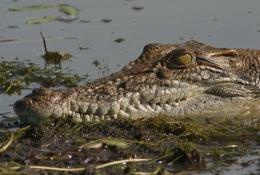 A crocodile in the Adelaide River catchment near Fogg Dam.