Attractive holiday town on the shores of Jervis Bay

Over the past two decades Huskisson has grown from a sleepy holiday resort and fishing port to a town on the shores of Jervis Bay with a buzz produced by excellent dolphin watching cruises, the beauty and appeal of Jervis Bay and the rapid growth of nearby villages including Vincentia and Hyams Beach. It is still true that Huskisson has a holiday air about it. The main street is full of cafes, takeaway shops, a dive shop, places where cruises can be booked and central to everything is a large waterfront hotel - The Husky Pub - where daytrippers and holidaymakers can sit in the beer garden, enjoy a meal at the Sports Bar or Brasserie, and soak up the relaxed holiday ambience.

Huskisson is located 185 km south of Sydney via the Princes Motorway and Jervis Bay Road. It is set on the shores of Jervis Bay 24 kilometres south of Nowra.

Huskisson was named after William Huskisson who was the Secretary of the Colonies and leader of the British House of Commons from 1827-28.

Dolphin Watching
One of the benefits of Jervis Bay is that there is at least one large pod of dolphins who spend nearly all their time in the bay and consequently dolphin cruises of the bay are virtually guaranteed to yield spectacular results when, sometime during the cruise, anything up to thirty dolphins will appear and race the cruise vessel darting and dancing through the water. This is also supplemented, in autumn and spring, by the annual migration of whales up and down the coast. It is possible (I know because I have seen them) to go out beyond the Jervis Bay headlands and to see up to twenty whales gambolling in the ocean off the coast. Huskisson is one of the great whale and dolphin-watching locations on the coast of New South Wales. There are two operators - Dolphin Watch Cruises (http://www.dolphinwatch.com.au/) and Dolphin Wild Cruises (http://dolphinwildcruises.com.au/) at Huskisson. Check their websites for details. They have offices in the town and, if the weather is good, they go out into the bay every day.

Jervis Bay Maritime Museum
The Jervis Bay Maritime Museum offers a fascinating insight into the history of wooden shipbuilding at Huskisson. It is open from 10.00am - 4.00pm daily and the visitor can experience a total of five different galleries. The Vera Hatton Gallery is where the Museum houses its temporary exhibitions; the Local History Gallery covers all aspects of local history including local Aboriginal history, the history of shipbuilding at Huskisson and a special section on shipwrecks in the area; the Surveyors Gallery has an extensive collection of surveying instruments dating back to the 18th century; the Jervis Bay Gallery of Science and the Sea contains historic maritime paintings and prints; the Long Gallery is devoted specifically to the iconic ferry, the Lady Denman; and the Marine Environment Gallery showcases the flora and fauna of Jervis Bay. Check out http://www.jervisbaymaritimemuseum.asn.au for details.

Laddie Timbery's Aboriginal Art and Craft Centre
Laddie Timbery's Aboriginal Art and Craft Centre is part of the Jervis Bay Maritime Museum Complex. Laddie Timbery is a respected Koori elder from the Eora Nation. He belongs to the Dharawal language group which spans from Sydney to Jervis Bay where his family currently live and produce artwork and artefacts. Timbery makes the traditional returning boomerang and decorates a large variety of artefacts and artworks. For additional information tel: (02) 4441 5999.

The Mangrove Boardwalk
Here is an excellent opportunity to explore the mangroves, the fauna and flora of the Currumbene Creek. It runs for 1.4 km from the Jervis Bay Maritime Museum. For more information check out http://www.jervisbaymaritimemuseum.asn.au/museum-grounds.html.

Diving at Jervis Bay
Jervis Bay is not only well protected from prevailing ocean swells but, with incredibly white sands and water which is remarkably clear, it is ideal for diving. There are a number of dive operaters in Huskisson of which the most popular is Dive Jervis Bay, 64 Owen Street, tel: (02) 4441 5255 (http://www.divejervisbay.com/) and Crest Diving (http://www.crestdiving.com.au/) and Jervis Bay Dive Charters (http://www.jervisbaydivecharters.com.au/).

Booderee Botanic Gardens
The Commonwealth Government’s decision to excise the “Jervis Bay Territory” from New South Wales always seemed wildly eccentric. The argument was that Canberra (the national capital) being landlocked the Commonwealth needed access to the sea. In 1915 the area bounded by Jervis Bay to the north, the coastal cliffs to the east, Wreck Bay to the south and Sussex Inlet and St George’s Basin to the west all became part of the ACT.

In 1995 the Botanic Garden was handed over to the Wreck Bay community, it was renamed Booderee Botanic Gardens, it became jointly managed by the local community and the Director of National Parks and, most significantly, the non-indigenous plants were slowly removed so that now it is a collection of the flora of south eastern Australia’s coastal environment and it is “the only Aboriginal owned botanic gardens in Australia.” The result is a wonderland of flora including lemon-scented tea tree, bottle brush (callistemon), waratah, Gymea lily, orange, pink and yellow flowering gums, cabbage trees, turpentine, blackwood and bloodwood amongst which is home to fauna such as red belly black snakes, diamond pythons, 10,000 pairs of the eastern long-necked turtle in Lake McKenzie (a perched lake in the gardens) and over two hundred species of birds, including crimson rosellas, rainbow lorikeets,kookaburras, wood ducks and satin bowerbirds.

Booderee Botanic Garden is being returned to its former indigenous glory. Already there is 3.7 km of easily accessible tracks through the wooded landscape, across the open lawns and beside Lake McKenzie. The trails pass the Heath and Woodland Garden which focuses on South Coast flora; the Casuarina Lawn which is particularly popular with the glossy black cockatoo; the Waratah Lawn which is an ideal place for picnics; the Rainforest Gully with its tree ferns and palms; and the Koori Garden which, given the new Aboriginal ownership, is emphasising the bush tucker and bush medicine aspects of the flora.

During the school holidays there is an extensive program of Aboriginal activities for kids including Bush Tucker and Medicines, Aboriginal Tools and Technology, Koori Games, Campfire Yarns, and a Twilight Walk. Check at the Visitor Centre for details. Booderee National Park is open daily according to the time of the year. Entry to the Botanic Gardens is free but it costs $10 per vehicle, $5 concession (pensioners, veterans, disabled) for entry to the park. Tel: (02) 4443 0977, check out http://www.environment.gov.au/parks/booderee/

* Prior to European settlement the area around Jervis Bay was inhabited by the Tharawal Aborigines.

* The first Europeans into the area near Huskisson arrived as early as 1812.

* In the 1840s, when the only transportation to the area was by sea, Governor Gipps decided to send a gang of 70 convicts to cut a track - it became known as The Wool Road - from Braidwood to Jervis Bay. The road from the wool-rich plains around Goulburn to Sydney was so bad that it was felt that transporting the wool to Jervis Bay and then shipping it to Sydney would be more efficient. As a result of this the town of Huskisson was laid out in 1840.

* the potential township did not prosper and settlers did not start to occupy the Huskisson until 1863.

* The prosperity of the town seems to have been the result of a man named  George Dent who, after reaching Currambene Creek in 1861, established a shipbuilding yard in 1864.

* Huskisson continued to build ships until 1966. One locally made vessel was the Lady Denman ferry which was completed in 1912 and operated in Sydney Harbour until it was towed back to Huskisson in 1981. It now operates as a maritime museum.

The most comprehensive website on the local area is the one maintained by the Jervis Bay Maritime Museum at http://www.jervisbaymaritimemuseum.asn.au. There is also now a new website with lots of local information. Check out http://www.visithuskisson.com.au.

A pod of dolphins race the cruise ship through the clear waters of Jervis Bay. 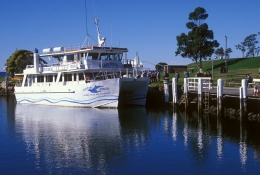 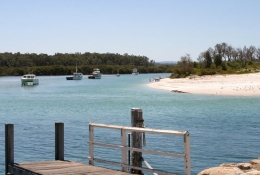 The jetty and mouth of the Carrambene Creek. 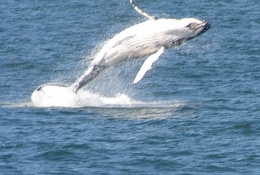 A whale breaching just off the coast at Jervis Bay.