Modest wheatbelt town made famous by the nearby Wave Rock

Hyden, a small wheatbelt town, is a modest rural service centre which has become a tourism magnet as a result of the remarkable Wave Rock which lies to the west of the town. Having not been permanently settled by Europeans until 1922, the town can claim to be the most recent of all the Central Wheatbelt settlements. Historically the movement east occurred to the north and followed the line of Hunt's wells and, later, the railway. Both of which bypassed the Hyden area. Today it lies in an area of remarkable granite outcrops including Mulka's Cave (part of Hyden Rock), Wave Rock and The Humps.

Hyden is located 332 km east of Perth via Kondinin.

It is accepted that the town's name is a corruption of Hyde's Rock. In the 19th century a sandalwood cutter named Hyde lived near Hippo's Yawn. The granite outcrop became known as Hyde's Rock and that was accepted by the Lands Department. Unfortunately, when it was printed it out it became Hyden Rock.

Wave Rock
Wave Rock makes Hyden a unique attraction and separates this small town from dozens of other settlements across the Western Australian wheatbelt. Located, and clearly signposted, 4 km east of Hyden, it is a unique and beautiful natural formation which is part of the much larger Hyden Rock. Wave Rock is one of hundreds of granite outcrops which dot the whole of the Central Wheat Belt. They were formed around 2600 million years ago.
Wave Rock, which is about 15 metres high, is shaped like a beautiful, breaking ocean wave. It is over 100 metres long. Geologically it is a granite inselberg and is part of the larger Yilgarn Crater. It is likely that its elegant shape was caused by the weathering below ground before the rock was exposed. The unusual shape has been given an even more powerful appearance by vertical streaks of algae which grow on the surface of the 'wave' as dark black stains which change to brown during the dry season.
One of the aspects of Wave Rock which is rarely shown on photographs is the fact that there is a retaining wall which follows the contour and collects rainwater which falls upon the rock. This unattractive addition was constructed in 1951 by the Western Australian Water Authority. The signage at the rock explains: "It is used to channel water into the Hyden Reservoir, which was originally used as an emergency water supply for livestock. In the early 1960s it became the town water supply for Hyden. It is still used for this purpose but is now supplemented by a larger dam out at The Humps." Around the rock there are a number of unusual features. These include Hippo's Yawn, King Rocks and Bates Cave.

Attractions Around Wave Rock
The area around Wave Rock has attraced a number of visitor attractions including a Visitor Centre and The Lace Place, a wildflower shop, a small wildlife park and a Pioneer Town which includes a General Store, Post Office, Hotel and Garage all designed to recreate the era of the 1920s. There are also additional natural attractions including Hippo's Yawn, King Rocks and Bates Cave.

Pioneer Town
Located at the Wave Rock Caravan Park, Wave Rock Road, and open through summer from 8.30 am - 6.00 pm and in the winter months from 8.30 am - 5.30 pm, the Pioneer Town Museum has an unusual collection of exhibits including old tobacco tins, veterinary instruments from the 1930's, the bar from the German Embassy in Fremantle, and  the pedal organ from the 1950's, which was originally used at dances in the Hyden Hall, the Lake King Pavilion and Hyden East. For more information tel: (08) 9880 5022 or check out https://waverock.com.au/activity/pioneer-town-wheatbelt-history-museum-western-australia.

Hippo's Yawn
Clearly signposted, and a twenty minute walk (1030 metres) from the Wave Rock car park, Hippo's Yawn is a large shallow cave which is around 13 metres high and looks like a Hippo's Yawn. The path passes through casuarina trees and is particularly impressive in spring when the careful observer will notice tiny orchids. It walk to the Hippo's Yawn is part of a 1.7 km loop from Wave Rock which takes between 30-40 minutes. For a map and detailed information check out https://trailswa.com.au/trails/hippos-yawn-hyden/print.

The Lace Place Museum
Located in the Wildflower Shoppe at the Shopping Centre near Wave Rock, The Lace Museum is an extensive lace collection dating back to the 1600s and including handmade antique gowns and wedding dresses as well as such rarities as a fragment of lace from the Batavia which was wrecked on the Houtman Abrolhos; an off cut from Princess Diana’s wedding veil; and a gold lace bikini. It is open daily between 9.00 am and 5.00 pm. For more information check out https://waverock.com.au/activity/the-lace-place and https://waverocklaceplace.com.au.

The Humps
Located 15 km to the north of Hyden via Lovering Road, The Humps is an impressive granite formation which rises about 80 metres above the surrounding countryside. It is best known for Mulka's Cave (see below). There are two walk trails (check out https://www.wheatbelttourism.com/wp-content/uploads/2018/01/Hyden-Walk-Trails.pdf - it has a downloadable map):
* The Gnamma Trail - this is a flat walk which is 1220 metres and includes interesting information about local Aboriginal culture - there are ten panels with information about local birds, animals and landmarks all illuminated by observations by local elders.
* The Kalari Trail - this walk, named after the small lizards which live on the rock, takes the walker to the summit of The Humps. It is a 1670 metre circuit and explores the geology of the rock and the flora in the area.

Mulka's Cave aka Bates Cave
Located 21 km north of Hyden, Mulka's Cave (previously known as Bates Cave) has an interesting Aboriginal story and some very interesting Aboriginal rock art and hand prints. There are over 450 hand prints and paintings in the cave. This makes it one of the most significant The Nyoongar people had a legend about a fierce devil-like being, a giant evil spirit, called Mulka the Terrible (Mulki-Jal-la) who lived in the cave. The story recounts how Mulka's mother fell in love with a warrior from a forbidden tribe. The child which she bore was a devil child who became known as Mulka the Terrible and who was known throughout the area as a murderer and a cannibal. He lived in Mulka Cave and left the imprints of his hands on the walls. Eventually he killed his mother after she had berated him for eating children. He fled but the tribe hunted him down and he was finally killed near the present site of Dumbleyung. The local Aborigines declared the whole area taboo after these events. For more information check out https://www.showcaves.com/english/au/caves/Bates.html.

* It is estimated that Wave Rock, part of Hyden Rock, was formed around 2.63 billion years ago.

* Prior to the arrival of Europeans  the area was home to the Njakinjaki Aboriginal people.

* The first Europeans in the area was sandalwood cutters who moved through searching for the precious timber.

* Farming didn't occur until 1922 when the land in the area was opened up.

* The first wheat crop in the area wasn't grown until 1927

* A railway between Kondinin and Hyden was built in 1930.

* 1933 saw a railway line from Lake Grace reach the town.

* In 1951 the Water Authority built a water channel around the top of Wave Rock to provide water to Hyden.

There is a local website which has extensive information. Check out https://waverock.com.au. 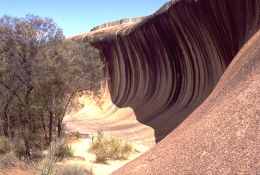 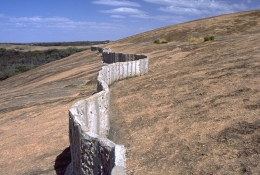 The water retaining wall at the top of Wave Rock