Isolated outback settlement which is nothing more than a pub and an airstrip.

Innamincka is nothing more than a pub (a good one with quality accommodation and above average outback meals), a general store, fuel pumps and an airstrip on the Strzelecki Track. It is located beside the mighty Cooper Creek and, being 464 km north of sealed road, is a natural stopping point for refuelling both car and tired humans. Its importance lies in its proximity to the famous Burke and Wills Dig Tree and the romance of being in the middle of nowhere.

Innamincka is located 1,164 km north of Adelaide via Broken Hill and 1,058 km via the Strzelecki Track. It is 464 km north-east of Lyndhurst on a dirt track.

If the locals don't agree with a name it never really happens. In 1890 the South Australian government named this tiny settlement Hopetoun after the Earl of Hopetoun, the Governor of Victoria. It lasted for a month until the locals insisted it return to Innamincka, which was the name of a nearby station. No one is sure what Innamincka means but it is likely to be a corruption of 'Yidniminckanie' a word used by the local Yawarawarka Aborigines to describe how the rainbow serpent had disappeared into waterhole. Another interpretation is that it means 'your shelter'. There is a dispute about this origin with local Yandruwandha elder, Aaron C. Paterson noting: "The real meaning of Innamincka as told to my great-grandfather, Yandruwandha man Benny "Mangili" Kerwin born 1892 as told to him be his maternal grandad "Kimi" is made up from two Yandruwandha words. Yini-you and Mingka-hole, thus "you-hole" literally translates as "your waterhole" being the place from which all Yandruwandha people originated from. The waterhole is called YINIMINGKA. Callyamurra is not a Yawarawarka word, it is Yandruwandha from two words Kalyu-wide and Marru-lake so it is "wide-lake". The Yandruwandha and their neighbours all have dreaming stories of the dreamtime serpent. Ours includes how the creek was formed and how the sandhills were also formed. Callyamurra waterhole is a freshwater tortoise "nharraminydji" totemic site. After our ancestors were formed we were instructed to carve out events as they happened on the rocks on both sides of the creek. In effect it is our archival library: history carved in stone." See Aaron C. Paterson's comment at the bottom of the entry.

Cruising Cooper Creek
The Innamincka Hotel offers an informative afternoon cruise which starts around 3.30pm, lasts for two hours, and returns to the hotel at 5.30pm. It is an unforgettable experience. As the boat travels along the shady "creek" it is greeted by screeching corellas, pelicans and seagulls (yes, they are this far inland) and the banks are heavy with beautiful river gums. Contact Innamincka Hotel, Innamincka, tel: (08) 8675 9901 for bookings.

Callyamurra Waterhole
Seven kilometres east of the town on the Innamincka–Nappamerrie Road is a turnoff to the oasis known as Callyamurra Waterhole. It is another 7 km from the turnoff. The combination of extensive birdlife, a beautiful stretch of water which has not dried up since Charles Sturt first sighted it, and edged by river gums, make it a special destination. At one end of the waterhole (ask at the hotel) there are some remarkable abstract shapes carved into the rocks by the Yawarawarka Aborigines.

Coongie Lakes
About 100 km north of Innamincka are the Coongie Lakes which provide a near-continuous supply of water for the surrounding wildlife. They have only dried up once since Charles Sturt reached their shores in 1845. The lakes are a wonderland for both birds and fish with flocks of pelicans and ducks as well as shoals of bream, catfish and yellow belly.

The Dig Tree
It is a sad and forlorn reminder of the harshness of the region and the foolhardiness of the Burke and Wills expedition. It was on a coolibah tree that the word “Dig” was carved as an instruction by those who had waited for the two explorers, hoping they would return from their journey to the Gulf. It was the cruellest irony of the ill-fated expedition that William Brahe and the support team abandoned the camp only seven hours before Burke and Wills returned.

Lake Eyre
There are three ways to experience Lake Eyre when it is in flood. You can fly over it and marvel at the white salt beaches, identify and differentiate North Lake Eyre from South Lake Eyre, and watch as the Warburton River spreads into a thousand anabranches as it reaches the edge of the lake. You can drive 85 km up the Oodnadatta Track from Marree, then head across the saltbush plain for 15 km until you reach low-lying sandy cliffs with easy access to a narrow beach. Or you can, most sensibly, seek advice at either Innamincka or Marree and find a way across the desert beyond the Coongie Lakes. It is never easy but the lake, when it is flooded, is still one of the wonders of outback Australia.

* Prior to European settlement the area was inhabited for tens of thousands of years by the Yawarawarka Aborigines who "were part of the widespread trade and ceremonial network ... part of 'one long family from Fowlers Bay to the Darling' who came to Anna Creek for the 'big corroborees'." This is disputed by Aaron C. Peterson who claims: "It is an insult to the many Yandruwandha people (numbering in their hundreds across Australia) to see a website proclaiming their traditional ancestors lands and waters as belonging to the Yawarawarka or any other of their neighbours. YINIMINGKA is Yandruwandha country only. Families from other groups came there to live. Their connection is historical ie. Post colonization."Mercifully this is beyond the expertise of this website to resolve. It is important to recognise that there are conflicting claims.

* The first European to reach the Innamincka area was Charles Sturt who, searching for the inland sea, passed through the area in 1845.

* In 1861, attempting to cross the continent from south to north, Burke and Wills reached the area. It was in this area that they suffered and died. Some 25 km west of Innamincka is Wills' grave and 54 km east along the Strzelecki Track is the 'Dig' tree where supplies were left for the explorers who were returning from their journey to the Gulf of Carpentaria. It is one of the tragedies of the ill-fated expedition that the camp at the 'Dig' tree was abandoned by William Brahe only 7 hours before the arrival of Burke and Wills. Both Burke and Wills died and the one survivor from the expedition, John King, was found close to death near the Innamincka waterhole.

* The township of Innamincka came into existence in 1882 when a police camp was established beside Cooper Creek. By 1886 a general store and a hotel were providing for the drovers who were moving cattle and sheep along the Cooper Creek. So intermittent were the visitors to the tiny settlement that the hotel only sold bottled beer. Kegs, once opened, were rarely used and the beer went off. Not surprisingly by the 1950s the town's largest construction was the bottle dump which was over a metre high and some hundreds of metres wide.

* In 1890 the town was gazetted as Hopetoun but this was short-lived. The name of Innamincka was demanded by the locals.

* Between 1890 and the turn of the century the small town prospered as a customs depot where state taxes were collected from increasing numbers of drovers who were moving cattle from Queensland into South Australia.

* A Royal Flying Doctor Base was established in 1928. It continued to operate until 1951.

* By 1952 the town was uninhabited and a flood in 1956 was what was left of the hotel, the police station, half of the Flying Doctor Base and all of the bottles downstream.

* By the 1970s a combination of the discovery of gas fields in the area and a dramatic increase in 4WD adventurers trying their luck on the Strzelecki Track saw a renewal of interest in this most isolated of outback towns.

Innamincka Hotel, Innamincka, tel: (08) 8675 9901 has good quality motel rooms, a number of huts and family accommodation in a bunkhouse.

There's a useful website - http://www.theoutback.com.au/innamincka-hotel/ - which provides comprehensive details about booking and staying at the Innamincka Hotel. 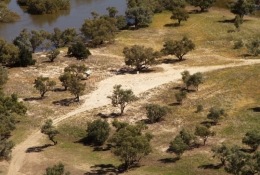 The site of the Dig Tree on the banks of Cooper Creek. 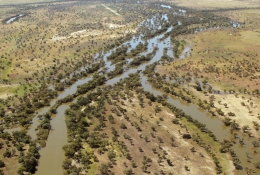 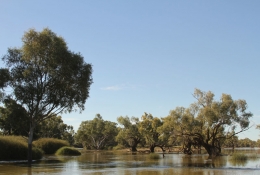 The Strzelecki Track cut by the flooded Cooper Creek. 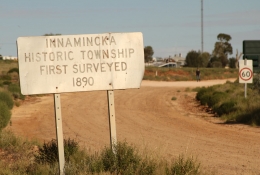 The start of Innamincka's main street - with a 60km restriction on the Strzelecki Track as it passes through town. 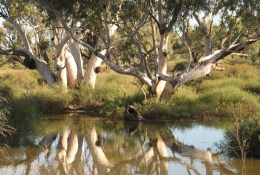 River gums beside the Cooper Creek below the town.