Historically Inverloch, with its access to Venus Bay and the dramatic coastline of the Bunurong National Park, was a destination for coal miners from Wonthaggi. Today it has become a popular holiday resort town with cafes and gift shops where people from Melbourne come to enjoy the coastline, bushwalking, exploring the beaches and rock platforms. It is a charming, bustling holiday town.

Inverloch is located at the mouth of Anderson Inlet 144 km south-east of Melbourne and 9 m above sea level.

Inverloch is a Gaelic word meaning "entrance to a lake". It is possible the town was named in honour of Sir Henry Loch who was Governor of Victoria from 1884-1889.

Water Activities in Anderson Inlet and at Venus Bay
From Inverloch, and broken only by the entrance to Anderson Inlet, all the way down the coast past Venus Bay there is a beautiful, long and huge sandy beach edged by dunes which enclose Anderson Inlet and act as a buffer against the wild seas of Bass Strait. These conditions make the whole area ideal for families with young children and for beach and boat fishing. Conditions for canoeing and water skiing are excellent  in Anderson Inlet and the winds from Bass Strait make sailing and sailboarding ideal. The inlet is also known as an excellent fishing destination with the possibility of catching King George whiting, Australian salmon, mullet and silver trevally. For surfers the long, exposed beach around Point Smythe and Venus Bay is attractive. For up to date surfing information about Venus Bay check out https://beachsafe.org.au/beach/vic/south-gippsland/venus-bay/venus-bay.

Birdwatching
The unusual, salt-secreting mangrove tree can be found at the inlet and bird watching can be enjoyed at Maher's Landing and Townsend Bluff. From Point Smythe to Venus Bay is a stretch of beach which constitutes one of Victoria's largest sand spits. In the north-western corner is a nature conservation reserve and a salt-marsh community can be found at the peripheries. In her article Birding at the Inverloch Lagoon (see http://www.sgcs.org.au/190%20June%202016.pdf) Trish Teesdale notes that she has seen "the endangered Hooded Plover ... Pied, Little Pied and Great Cormorants ... Black Ducks ... Great Egrets ... Beach Stone Curlews ... Sooty and Pied Oystercatchers ... 1,000 Crested Terns ... Double banded and red capped plovers ... Australasian Gannets ... and White-bellied Sea Eagles."

Bunurong Environment Centre
Located at the corner of Ramsay Boulevard and The Esplanade in Inverloch is the Bunurong Environment Centre, a voluntary organisation which has one of Australia's most impressive collections of shells (the Jack Lewis Shell Collection was purchased in 1980 and other collections have been added). They now have over 6,000 shells. The Centre also has a display of dinosaur bones. It is open Friday to Monday from 10.00 am - 4.00 pm. For more information tel: (03) 5674 3738.

The Mosaics
Outside the Bunurong Environment Centre are eight small mosaics depicting aspects of Inverloch's history. They are:
1. Samuel Anderson - designed by Kathy Everitt - he was the first settler at Bass in 1834 and discovered Anderson Inlet in 1840
2. The ketch Ripple - designed by Ted Smythe - the Ripple was a coastal trader which carried building materials into the area.
3. Transportation of Coal in 1909 - designed by Jill Hill - depicts how coal was carted by bullock dray from Wonthaggi to Inverloch jetty from whence it was shipped to Melbourne.
4. Shack Bay - designed by Janice Orchard - depicts the shacks at Inverloch where miners spent their holidays.
5. Beef and Dairy - designed by Ivan Fell - the grazing land around Inverloch has supported both beef and dairy cattle.
6. Pine Lodge - designed by John Mutsaers - Pine Lodge was a guest house that was built in 1930.
7. Vineyards and Pottery - designed by Janice Orchard - depicts local wine production and local potters.
8. Fishing and Windsurfing - designed by Valda Cooper - depicts the popular activities of fishing and windsurfing.

Driving in the Area
To The West - Bunurong Marine National Park and Bunerong Coastal Reserve
The coastal scenery around Inverloch is surpassingly lovely. If you drive 13 km south-west along the Bunurong Cliffs to Cape Paterson you will experience one of the hidden wonders of Victoria. The Bunurong Marine National Park covers 2100 ha and 5 km of coastline. The Parks Victoria website (http://parkweb.vic.gov.au/explore/parks/bunurong-marine-national-park) explains: "The intertidal sandstone reefs of the area boast the highest recorded diversity of intertidal and subtidal invertebrates in eastern Victoria. The range of seaweed species is also large and includes greens, blue-greens, browns and encrusting, coralline reds ... The diversity of habitats supports many marine animals including seastars, featherstars, crabs, snails, Port Jackson Sharks and up to 87 species of fish. If you are lucky you may see Humpback Whales, Southern Right Whales or Subantarctic Fur Seals." The best time to explore the area is in the hours on either side of low tide when access to the rocks allows for an investigation of the marine animals living in the rock pools.
There are a series of lookouts and access points along the Cape Paterson-Inverloch Road with the major points being - The Caves, Eagles Nest, Twin Reefs, The Oaks and Cape Paterson Bay Beach.

The Caves (Dinosaur Dig)
The caves and the dig a real opportunity to understand what the coast was like some 115 million years ago. There is excellent signage which explains: "You step back 115 million years in time. The landscape you see today does not exist. Instead of rocky cliffs and sea, you are standing in a wide, flat-bottomed river valley. You can walk southwards from here to Antarctica without getting your feet wet. At this time in the Early Cretaceous (115 million years ago), South-eastern Australia was situated much further south - approximately 70°S latitude. This is within the Antarctic Circle. When the sun set each winter it did not rise again for two to three months. The plants and animals that lived in this valley had to cope not only with the dark, but also with freezing temperatures ... Since 1994 researchers from Monash University and Museum Victoria  have conducted annual summer field trips in this area. The main site is situated on the shore platform below you. As the richest park of the fossil layer is in the intertidal zone, the site is only accessible 3-4 hours either side of low tide. An average of 1000 fossil bones and teeth of animals that lived and died in the rift valley are painstakingly collected each field season ... The fossilised remains of many different dinosaurs have been discovered along this coastline, but most of them have only been identified from single bones and teeth. The most common dinosaur bones belong to herbivorous (or plant eating) dinosaurs: hypsilophodontids and ankylosaurs. Small dinosaurs like Qantasaurus intrepidus, lived in and around the forests along the edge of the rivers. Tiny bones of baby dinosaurs have been recovered from the Dinosaur Dreaming site ...Dinosaurs were not the only animals to inhabit this amazing landscape. As we are digging up the remains of an ancient river the most common fossils we find belong to the animals that lived in the water, such as primitive turtles, giant labyrinthodont amphibians and different species of fish. The isolated teeth of small fresh water plesiosaurs have also been found. Flying animals such as birds  and pterosaurs are also represented in this fauna.
"In March 1997, the first evidence of tiny mammals was discovered - a 16 mm long jaw - which propelled the site to world prominence. All the Mesozoic mammal remains throughout the world would fit into a shoebox, that is how rare they are. So far at least six different types of tiny mammals the size of a mouse have been discovered at the Dinosaur Dreaming site."
There are organised dinosaur hunting expeditions which can be booked on (03) 5674 3738 or 0447 352 619. Check out http://sgcs.org.au.
There is a dinosaur footprint which can be seen at the site. It is located on the shore platform about 100 metres north of the stairs at The Cave.

Eagles Nest
About halfway between Inverloch and Cape Paterson, as part of the Bunerong Coastal Reserve, is Eagles Nest, an unusual formation which juts out and looks like the top half of Australia. It is directly adjacent to Eagles Nest Beach.

To The East - to Tarwin Lower and Venus Bay
The Inverloch-Venus Bay Road heads 19 km south-east to the small village of Tarwin Lower and 29 km further on to Venus Bay which is a notable surfing destination. While not as dramatic as the cliffs to the west of the town this is still a special drive through wild country whipped in winter by the cold winds off Bass Strait. The beach is 24 km of uninterrupted white sand. Access is at the northern end of the Venus Bay settlement.

Screw Creek Nature Walk
Located around the shoreline of Anderson Inlet (it is 2.5 km return) the Screw Creek Nature Walk starts at the far end of the Inverloch Foreshore Camping Ground and passes salt marsh grasses, secluded beaches, extensive stands of estuarine mangroves and sand dunes. There is a good description of the walk at http://www.weekendnotes.com/screw-creek-nature-walk-inverloch. A brochure and map can be obtained from the Inverloch Visitor Centre.

* Prior to the arrival of Europeans the area was home to the Bunurong Aborigines who were part of the Koolin nation. Ancient middens have been discovered in the area.

* The first white settler in the district was Samuel Anderson who, in 1840, discovered the Anderson Inlet while exploring the coast after he had settled at Bass River in 1835.

* The first pastoral run in the area was established in 1840.

* In 1863 the barque Amazon was stranded at Wreck Bay.

* In 1886 the town of Inverloch was proclaimed.

* By 1888 a cemetery had been established near the town.

* In 1889 the town was officially named Inverloch.

* In 1896 the Esplanade Hotel opened for business.

* In 1909 Inverloch became a port for the shipment to Melbourne of black coal which was mined at nearby Wonthaggi. The original jetty was built.

* In 1910 the rail from Wonthaggi reached the port at Inverloch.

* In 1914 a foreshore committee was established to promote the town as a holiday destination.

* By 1920 the steamship Moonah was running supplies from Melbourne on a regular coastal run.

* In 1930 the Pine Lodge Private Hotel was opened. It included a nine hole golf course.

* During the depression in the 1930s shacks were built at Venus Beach.

* Electricity was connected to the town in 1934.

* In 1937 the first Miss Inverloch competition was held.

* In 1939 the Pine Lodge Private Hotel was used as a naval hospital for the duration of the war.

* The arrival of rail and road led to the decline of exporting activities, as was the case with most of South Gippsland's ports.

* By the late 1970s the road to Cape Paterson had been sealed.

* The Golden Sands housing estate was opened for sale in 1990.

* In 1991 the Bunurong Marine Park was established. That year saw the discovery of dinosaur bones near The Cave.

* Today, the area relies on tourism, as well as dairying, grazing and wool. Holiday-makers from Melbourne are attracted by the absence of commercial development.

* On the night of the 2011 census nearly 50% of the houses were unoccupied - they were holiday homes.

There is an official website which provides information about Accommodation and Eating. Check out http://www.basscoastpartnership.com/pages/display/2. 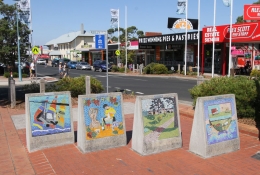 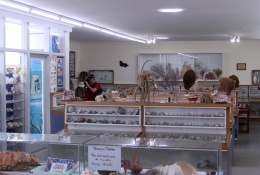 The Jack Lewis Shell Collection at the Bunurong Environmental Centre 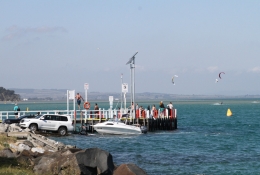 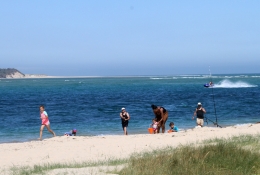 A summer's day on Inverloch Beach on Anderson Inlet

The beach on the Inverloch foreshore 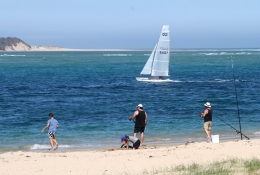 The view across Anderson Inlet from the Inverloch foreshore 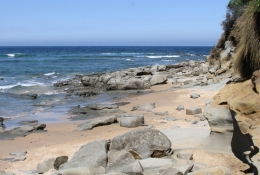 The coast at the Cave near the Dinosaur Dig 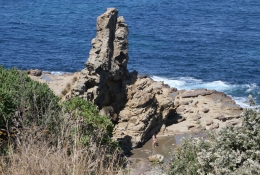 The Eagles Nest formation in the Bunurong Coastal Reserve 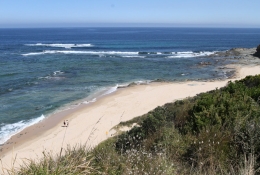 The view from the lookout at Twin Reefs 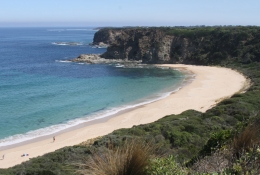 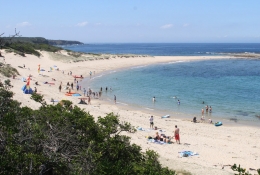