Iron Knob is a near-perfect example of the changing fortunes of mining towns. There was a time when Iron Knob and the nearby town of Iron Baron were hugely productive with a population at Iron Knob of over 3,000 workers all employed by, or working for, BHP. The town itself was located in the heart of a semi-desert area - the annual rainfall in this inhospitable environment is rarely more than 200mm - some 54 km from Whyalla and the shores of the Spencer Gulf. Today it is typical, struggling, mining town with closed up shops and empty houses but with a resilient local population who are determined to keep the town alive. It is driven by iron ore prices and when they rise the town is rejuvenated. It is important for visitors to understand that Iron Princess, Iron Monarch and Iron Knob are all connected to the town of Iron Knob but Iron Monarch is nothing more than a mine (without a community) and Iron Princess is a small mine located between Iron Knob and Corunna Station.
Always check with the Whyalla Visitor Centre to find out whether the tours are operating or whether the town is effectively closed down. It is always worth visiting - if only to see what happens when mines close down.

By 1854 there were pastoralists in the area and Iron Knob (also spelt Iron Nob) had been named - presumably as a description of the shape of the mountain. Visitors should note that the "Knob" is now 150 metres lower than it was in 1880 as a result of mining.

Iron Knob Tours, Tourist Centre and Museum
The local community raises funds by conducting tours of the mines which leave the Visitor Centre between 9.15 am - 12.15 pm and from 1.15 pm - 2.45 pm tel: (08) 8646 2129 or after hours 0439 302 671. The tours take between 60-90 minutes and include a 7 minute video about the town and an inspection of a pictorial display of the history of the town. The tour passes the first home built for the BHP Employment Scheme in Iron Knob. The scheme allowed workers to buy their own homes by putting down a deposit of £50 and having £1 a week taken out of their pay until the house was paid off. The Tourist Centre also sells interesting ironstone jewellery ranging from worry beads to expensive necklaces. The tour is full of interesting and idiosyncratic information about the development of the mine and the growth of the town. It also provides excellent views across the Princess Mine which has recently re-opened. The Visitor Centre includes a Mining Museum which has old mining equipment and a large selection of mineral specimens, taken from the mines in the area.

Golf Course
To attract visitors the citizens built a golf course which, sadly, had to be moved when the new Princess Mine was opened. Still it offers golfers an opportunity to play one of the harshest golf courses in the country. Usually greens in the desert are made from oiled sand. These greens are simply dirt and the fairways are rough and challenging. For information about playing contact either Ray tel: 0408 145 470 or John 0418 685 495.

* Prior to the arrival of Europeans this harsh desert area was sparsely populated by the Banggarla Aboriginal people.

* The first European to pass through the area was the explorer, Edward John Eyre, who, in 1839, identified deposits of ironstone and climbed one of the many local ironstone mountains - probably Iron Baron.

* In 1848 a report on the area recorded that copper, lead, zinc and manganese had been discovered.

* In 1868 the Corunna Station was taken over by Sir Samuel Davenport.

* In 1878 Davenport shipped ironstone from the area to London for the Colonial and Indian Exhibition of that year.

* Today Iron Knob is widely recognised as the first commercial iron ore mine in Australia. It was first exploited by Mount Minden Mining in 1880 but they couldn't keep up production or pay the rent and it was taken over by BHP in 1896.

* In 1888 the iron smelters were established at Port Pirie.

* BHP started mining in 1899 when their smelters at Port Pirie required ironstone as a flux to smelt the silver-lead ores from Broken Hill.

* BHP ran Iron Knob continuously from 1899 to 1998.  During that time the Iron Knob deposit was the largest iron in Australia. In the early years iron ore was transported to Port Augusta by bullock teams.

* Until the 1960s all of BHP's major steel making operations - at Newcastle, Port Kembla, Port Pirie and Whyalla - were supplied with iron ore from the Iron Knob area.

* BHP handed the administration of the town back to the local residents.

* The remaining residents purchased the local Post Office, improved the local caravan and campsite and established a visitor centre run by volunteers.

* The mine was reopened in 2014 by Arrium Ltd, a mining company which was previously part of BHP.

Iron Knob Camping Grounds - located behind the Post Office. Donation for use of the facilities would be appreciated.

There are no eating facilities in the town.

There is a useful Progress Association website. Check out http://www.ironknob.org. 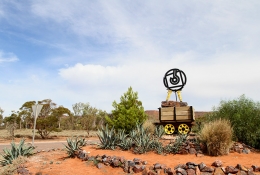 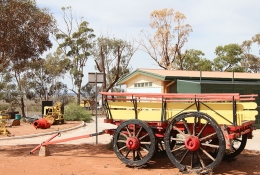 Historic equipment outside the Visitor Centre and Museum

The abandoned service station and restaurant 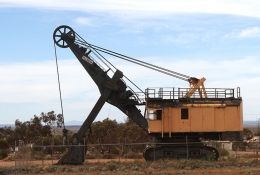 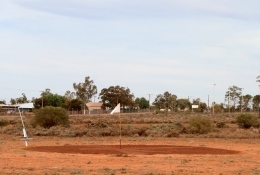 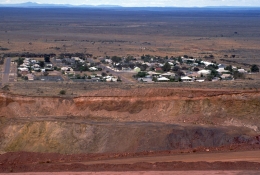 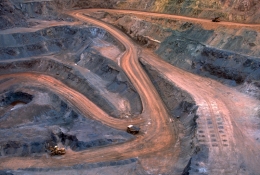