Today Isisford is a small rural town which was once a vital service centre for the surrounding huge sheep properties. Modern transport and economic efficiencies have seen it reduce in size but it still proudly declares that it has "an 18-hole golf course, swimming pool, tennis court, museum, post office, two hotels, fuel outlet, library and a very impressive Interpretation Centre."

Isisford is located 1,237 km north-west of Brisbane via Barcaldine and Ilfracombe. It is 117 km south of Longreach.

The town was named because it was close to Isis Downs property and close to a ford across the Barcoo River. In turn Isis Downs had been named after the famous Isis River in Oxford.

Outer Barcoo Interpretation Centre
Located at 12 St Mary Street, the Outer Barcoo Interpretation Centre is a museum "depicting the evolution of nature from 100 million years ago to the present. The feature attraction is a life-sized replica model of Isisfordia Duncani, who lived around 98 million years ago and was the evolutionary ancestor of all crocodilians that live on earth today. The Bulldog fish was also found in the area dating back 100 million years ago. There are displays of local fauna, flora, reptiles, birds and fossils that have lived in this region, as well as information on the formation of the Great Artesian Basin and general history of the Isisford area. An audio-visual presentation portrays life in the Isisford area since settlement. The film depicts Isisford as being 'the middle of everywhere'. The building also houses a 60 seat theatrette, cafeteria, local arts and craft displays."
For more information check out https://www.queensland.com/en-au/attraction/outer-barcoo-interpretation-centre#OqGzoySGwyo6vSIu.99 or tel: (07) 4658 8133. The centre is open from 8.00 am - 5.00 pm Monday to Friday from April to the end of October and from 9.00 - 3.00 on Saturday and Sunday and from 1 November - 31 March.

Historic Plaques
There are a number of historic plaques in the main street which tell the story of the town and the specific buildings. For example:
Isisford Post Office 1898
In 1876 Wittown Post Office opened for business in a temporary quarters and James Whitman was the first postmaster. On this site the first Post Office was built in 1881 and C. R. Parish was the postmaster. The existing post office was completed in May 1932.
Bank of New South Wales
On this site the Bank of New South Wales opened in Isisford on 26 July 1919, in the premises owned by Charles Schwiering. The manager F.S. Ebbsworth wrote in September 1910, premises only suitable for temporary purposes, it being necessary to use the officer's sleeping quarters as part of the office in order to secure privacy when interviewing customers. These premises were occupied by the bank until their own residence on the corner of St Mary and St Helena Streets was completed on 15 September 1913.
Clancy's Overflow Hotel
The first hotel built near this site was the Teddington Arms in 1876 by the Whitman brothers, William and James. In 1884 W. Frost was the licensee of the Teddington Arms Hotel and renamed it the Club Hotel. George Power built the two storey hotel in 1898 and changed the name to Power's Club Hotel. While Ellis Sutton was the licensee of the Club Hotel 1907-1908 he installed electricity to the hotel, it was the first hotel in the far west to be connected to electricity. On 15 April 1908 the first council meeting was held in this hotel. Glen Clancy became licensee in 1965 and  the name was changed to Clancy's Overflow.

Isis Downs Station and Woolshed
Although it is not open to the general public (apart from very occasionally - for special events) the Isis Downs Woolshed, located on the Isisford-Blackall Road, is the most important historic building in the district.
Semi-circular in shape it was prefabricated in England, shipped to Australia, and erected on Isis Downs in 1914. It was the first electrified shearing shed in Australia and the old steam engines and equipment are still in evidence although, obviously, they are not being used and have not been put on display. It is still the largest shearing shed in Australia.
The Queensland Heritage Register writes about the woolshed complex extensively and lists six criteria for its significance of which the most important are:
"The Isis Downs Woolshed Complex (constructed 1913-1914) is important in demonstrating the evolution of sheep shearing processes in Queensland, and in particular of early mechanised shearing.
"The powerhouse is important in demonstrating the generation of non-grid electricity in remote and regional Queensland prior to World War I. The introduction of both hydraulic and electrical generating systems specifically for a shearing shed was only possible at the largest and most progressive sheep stations.
"The place demonstrates rare, uncommon or endangered aspects of Queensland’s cultural heritage.
"The large and distinctive semi-circular prefabricated shearing shed is the only example of its type in Australia. The collection of associated machinery within the complex is also 'unique' in terms of its composition and condition.
"The place is important in demonstrating the principal characteristics of a particular class of cultural places.
"The Isis Downs Woolshed Complex is important in demonstrating the principal characteristics of a large, early twentieth century shearing operation, comprising shearing shed (completed with mechanical shearing motors and wool presses), holding yards, powerhouse (with an extensive array of associated machinery and infrastructure) and bale hoist. The place was and remains one of the largest and most intact early twentieth century shearing complexes in Queensland, of exceptional value in contributing to our understanding of early mechanised shearing in this State.
"The current Isis Downs Woolshed was completed in 1914. A prefabricated steel structure clad with corrugated iron, the shed was designed by Kay, MacNicol and Company Engineers for the then property owners, Sir Rupert Clarke and R S Whiting. Although smaller than the previous shed that had burnt down, the current shed's design is unique, creating a large semi-circular internal space." For more information check out https://environment.ehp.qld.gov.au/heritage-register/detail/?id=602544.
The shed, which can be seen from the road, is of particular interest to people who have some connection with the wool and sheep industries or who are interested in early Australian rural history. The 'Isis Downs' manager points out that about 80 per cent of his visitors are 'cockies' or graziers.

Fishing and Oma Waterhole
The Barcoo River is known for its excellent fishing which is why Isisford proudly declares itself the home of the yellow belly. There are a number of places along the river. One of the most popular is the Oma Waterhole which lies 16 km to the south of the town. It offers boat ramp access to the river as well as a range of camping options while including hot showers and toilet facilities.

The Big Yellowbelly
Located on the Isisford-Ilfracombe Road just out of Isisford is a huge 12m yellow belly made of scrap metal by a local, Henry “Cocky’”Bignell, who, over a number of weekends, and with the help of some mates, created the 5 metre high art installation on the banks of the Barcoo. The scrap was salvaged from surrounding properties. It was officially launched in 2018.

Yuranigh Pond
This pond, located 6 km out of town on Emmet Road, was named after Yuranigh a famous Aboriginal Australian who lived near Molong in New South Wales. "Yuranigh's life bridged the old and the new Australian cultures in the period from about 1820 until his death in 1850. A rather solitary person of some standing among his people, Yuranigh joined Surveyor-General Sir Thomas Mitchell's 1845 exploratory expedition at Boree - one of a series of ventures which mapped large areas of inland NSW and Queensland.
"Yuranigh worked as a guide for Mitchell, gaining the explorer's friendship and respect. He safely guided the expedition through sparsely settled areas and the territories of other tribes. Under very difficult drought conditions, when temperatures soared to 43°C, Yuranigh liaised with local Aborigines, secured guides and tracked wandering stock and lost members of the party.
"His intelligence and his judgement rendered him so necessary to me that he was ever at my elbow. Nothing escaped his penetrating eye and quick ear." Mitchell wrote in one of his many references to Yuranigh in his records. Yuranigh was a small slender man who lived by himself, had adopted some European ways, and wore European-style clothing at the time he met the Surveyor-General in 1845." This is taken from the sign at his grave near Molong.

* Prior to the arrival of Europeans the district was home to the Iningai Aboriginal people.

* In 1846 the explorer Thomas Mitchell travelled through the district.

* Edmund Kennedy explored the district in 1847.

* In 1856 Augustus Gregory, looking for Ludwig Leichhardt, passed through the area.

* In 1867 Charles Lumley Hill took up land which he named Isis Downs.

* By 1875 the settlement had a pub, store and blacksmith all of which had been established by William and James Whitman.

* The town was surveyed in 1878. It was initially called Whittown or Wittown, presumably after the Whitman brothers, but was soon changed to Isisford.

* A local school was opened in 1883. That year saw Queensland National Bank open a branch in the town.

* The Isisford Shire was proclaimed in 1907.

* In 1910 Isisford became part of the first motorised postal service in Australia, from Ilfracombe to Isisford.

* The old shearing shed on Isis Downs was destroyed by fire in 1912.

* The famous Isis Downs shearing shed was built in 1914.

* A sub-artesian bore was sunk to provide the town with water in 1925.

* A weir across the Barcoo River was constructed in 1934.

* A severe drought in 1965 saw many services withdrawn from the town.

* Isisford hit the news in 1989 when a recent arrival from the south declared himself a 'Gay Rights' candidate for the electorate. The media swarmed into the town while the candidate, declaring persecution, fled to Cairns to run his campaign.

* Outback Opera in the Shearing Shed was held at Isis Downs in 2005.

* In 2008 the shire was amalgamated with Ilfracombe and Longreach.

There are two useful websites - check out http://www.outbackqueensland.com.au/isisford and http://longreachtourism.com.au/our-region/isisford. 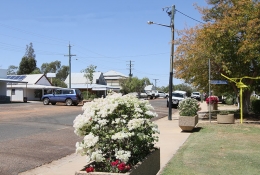 The main street of Isisford 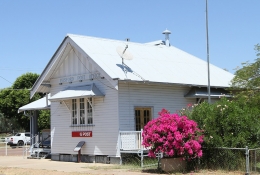 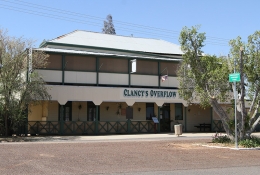 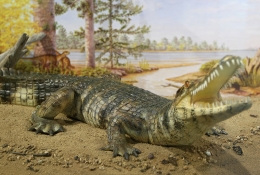 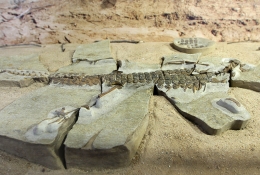 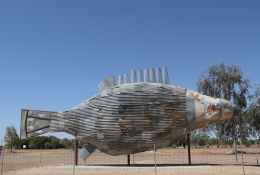 The Big Yellowbelly at Isisford