Quiet service centre near the Queensland end of the Dingo Fence

Jandowae is a small rural town surrounded by rich alluvial soil and some of Queensland's richest and most productive agricultural land where wheat, barley, sorghum, oats, millet, sunflower, safflower and linseed. There are also dairy and beef cattle studs in the district.

Jandowae is located 258 km north-west of Brisbane and 49 km north of Dalby.

The town's name reputedly derives from a Barunggam word meaning 'waterhole'. It was first used by Europeans in a petition to the Secretary of Lands in 1862. It is said that, later, a man named John Dowaie established a rest area for travellers called John Dowaie Camp. This possibly explains the spelling, 'Jondowaie', used by early settlers. When the railway reached the town in 1914 the current spelling was adopted to avoid confusion with Jondaryan.

Jandowae's Heritage
There is a simple brochure, available at the Jandowae Visitor Information, Community and Cultural Centre, which lists 16 places of interest in the small town. Of those Athlone Cottage and the Dingo Sculpture are the most impressive. These are the ones of particular interest:

1. Athlone Cottage
Located beside the creek at the end of High Street, Athlone Cottage was once a slab hut which was built around 1890. In 2009 the local Jandowae & District Progress & Heritage Association wrote of the building: "It had an ant bed floor and was located opposite Athlone, a property near the Jandowae Dam. It was extended to include the bathroom, kitchen and veranda in about 1930 and a floor was added. It had not been occupied since the 1970s, and after years of being used as a storage facility for many years, its importance to the district was recognised and it was moved to its present location in 2001 with the support of the Wambo Shire Council. It has been progressively restored and the area landscaped. The gardens and paving were developed with a grant from the ABC Open Garden Scheme. The gardens try to feature heritage plants such as geraniums, iris, chrysanthemums, lavenders etc. Athlone was first opened to the public as part of the Jandowae Timbertown Celebrations in June 2004. The attractions surrounding the cottage include a viewing platform at the waterhole (where birds can be observed); the Cream Room with its exhibits of historic dairy equipment; the Comet D Pattern windmill which pumps from a 50 metre deep bore; a huge timber log carved with 'Wambo Shire Council' (which now longer exists); a baker's oven from the 1920s; and the shearer's quarters, dating from 1907 and coming from the property known as 'Cresley'.

2. Railway Station - dating from 1914 and now located in Lions Park off High Street. A local club operates a miniature railway in the park.

3. Stationmasters House - located on the corner of Dalby and William Street, and built in 1914, it is a fine example of an elegant Queenslander.

5. Queensland National Bank building (1913), at the corner of High and George Sts (now a private residence) and, opposite, the ANZ Bank building - originally the Union Bank.

6. Club Hotel - built in 1913 on the corner of Hickey and George Street, this was the first two storey hotel in town.

12. Dingo Sculpture
The Scottish sculptor, Andy Scott, who works out of a studio in Philadelphia in the USA and is famous for his twin sculptures "The Kelpies" (the largest equine sculptures in the world - at Falkirk on the Forth & Clyde Canal) created the town's 2 metre high Dingo which is made out of galvanised steel segments. It is located on the corner of High Street and George Street.

Dingo Fence Drive
The journey to and around the Dingo Barrier Fence Drive can start at Jandowae. There is a display depicting the Dingo Barrier Fence in Jandowae opposite the Jandowae Community and Cultural Centre. The display depicts three timber dingoes in front of a mural which is protected by sections of fence similar to the actual dingo fence. The fence itself was 5300 kilometres from Jimbour to Fowlers Bay in South Australia and was constructed to stop dingoes and wild dogs attacking sheep and cattle and provide a safer environment for the animals.
The plaque at the start of the fence notes: "The Dingo Barrier Fence scheme was first proposed in 1948 to provide protection from wild dogs and dingoes in the grazing areas of South Eastern Australia. Reconstruction commenced in 1984. Maintenance is carried out under the leadership of Project Officer - Jerry Stanley, by teams fo men who patrol their section of the fence each week."
To get to the fence drive south for 16 km from Jandowae and turn left into Lyndley Lane and finally drive 1.4 km until you reach the junction of Lyndley Lane and Fletchers Road. Turn right. The fence begins at the corner post of the four fences to your right. When you cross the next grid, the fence is on your left and a little further on, the maintenance begins. The Dingo Fence is the longest man made structure. It is constructed of wooden posts, strainers, star pickets, wire and different types and sizes of netting and is cleared on both sides to a width of 5 m. For more information check out http://www.dalby.info/html/attractions_dingo.asp.

Warra Drive
This 95 km journey from Jandowae to Warra, Macalister and Jimbour includes the  former coal loading facility at Macalister which serviced the Wilkie Creek Open Cut Coal Mine. At Warra the Warra Heritage Centre is worth visiting and on Cooranga Creek there is a monument to the explorer Ludwig Leichhardt who camped beside the creek. On the road back to Jandowae, Jimbour House (see the Jimbour entry) is notable for its beautiful gardens and the impressive sandstone home (not open to the public) built in the late 1800's. For more information check out http://www.dalby.info/html/attractions_warra.asp.

Jandowae Dam
Located 5 km north east of Jandowae, the Jandowae Dam is a popular recreation spot for picnics and barbecue as well as fishing. It is stocked with silver perch, golden perch and Murray cod. There are mudflats around the perimeter of the dam which provide homes for birds and make the lake a suitable place for birdwatchers.

* Prior to the arrival of Europeans the district was home to the Barunggam Aboriginal people.

* The town's name derives from an Aboriginal word (Jindowie) meaning 'waterhole' and was first used by whites in a petition to the secretary of lands in 1862.

* The first European settlers arrived in the early 1860s with the first white child, Henry Bateman, was born in 1866.

* The first school was established in 1877 with the enrolment of 13 children.

* The provisional school was opened in 1887.

* In 1909 the local Catholic Church was consecrated.

* By 1911 the town had a Butter Factory and two hotels - the Exchange and the Commercial.

* In 1913 the Queensland National Bank was built on the corner of George and High Streets.

* The railway reached the town in 1914. The station was named Jandowae to prevent confusion with Jondaryan.

* The local Anglican Church was completed in 1917

* The Presbyterian Church was completed in 1921.

* The town's first medical practice was started in 1930.

Local information is available from the Jandowae Community and Cultural Centre at the corner of George and High Streets, tel: (07) 4679 4480.

There are useful local websites. Check out http://www.southernqueenslandcountry.com.au/destinations/jandowae. There is also http://www.jandowae.com which provides basic information. 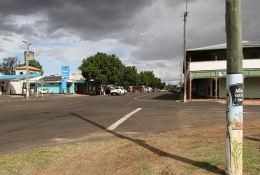 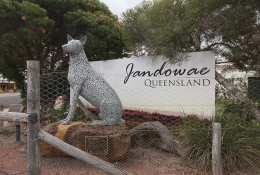 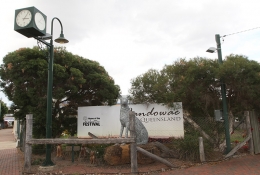 The Dingo and a replica of the Dingo Fence 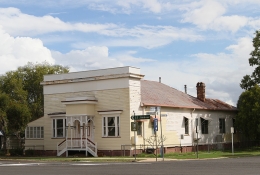 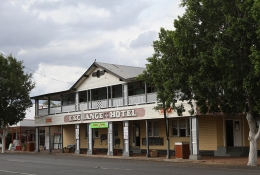 The Exchange Hotel in High Street 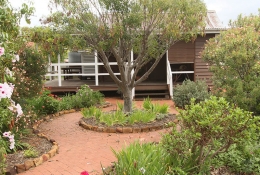