Impressive limestone caves on the western edge of the Blue Mountains.

Although there are now day trips from Sydney to the Jenolan Caves, anyone wanting to experience both the area and the caves would be advised to plan a minimum two-day journey. It is worth the effort. The drive from Sydney includes one of the most dramatic stretches of road in New South Wales. The visitor winds down into a deep valley until they reach a stream with an incredibly blue pond at the entrance to the caves - the Grand Arch. The road then winds  through the Grand Arch (the largest open cave in Australia) which is 24 metres high, 55 metres wide and 127 metres long. It is an unforgettable introduction to the whole experience that is Jenolan Caves. The area around the caves is extraordinarily beautiful with platypuses (platypii) in the rivers;  wallabies and other indigenous animals roaming freely in the bush; excellent bushwalks; superb viewing points in little known areas of the mountains; and, most of all, a range of excellent cave tours ranging from adventure caving through night tours to guided tours through ten different caves. Not surprisingly it is a major tourist destination and forward booking is necessary.

The Jenolan Caves are located 175 km from Sydney via the M4 Great Western Highway. The route is 129 km on the highway and 46 km on the Jenolan Caves Road which, at places, is so narrow that the road becomes one-way into the caves between 11.45am-1.15pm. The caves are 793 metres above sea level.

The area was originally inhabited by the Gundungurra Aboriginal people who are said to have called the cave complex "Genowlan" which is supposed to have meant something like "high place shaped like a foot". Genowlan officially became Jenolan when the caves were named in 1884.

Exploring the Caves
There are 22 major caves in the Jenolan system. Of these there are ten - the Imperial, Chifley, Lucas, River, Orient, Temple of Baal, Diamond, Pool of Cerberus, Jubilee and Ribbon - which are 'dark caves' opened for guided inspection. For detailed descriptions of the caves check out http://www.jenolancaves.org.au/the-caves/show-cave-tours/. There are tours every day of the week.

Cave tours leave regularly between 9.30 am and 8.00 pm. On weekends there are 27 tours on Saturday (including the 8.00 pm Legends, Mysteries and Ghosts). There are standard guided tours of 1-1.5 hours to the major caves – Lucas, Chifley, Imperial, Orient, Diamond - and tours of the River Cave at 10.00 am and 1.30 pm which involve a frightening 1298 steps. In recent times the Jenolan Caves staff have been offering Adventure Caving. Every day at 1.15pm there is an introductory tour of the Plughole which involves "climbs, crawls and squeezes" as well as the "infamous S-Bend squeeze". It is not available to pensioners, seniors and children, and should be booked. For a detailed timetable check out http://www.jenolancaves.org.au/the-caves/cave-tour-timetable/regular-tour-timetable

The Geology of the Area
The Greater Blue Mountains World Heritage site explains: "Jenolan Caves began their story some 430 million years ago, as a deposit of calcium-rich mud on the floor of a shallow sea. The Jenolan limestone, and a number of similar deposits in the Greater Blue Mountains, was later uplifted, along with other rocks, then twisted and folded and exposed by erosion. Recent research has revealed something amazing: the caves began to form some 370 million years ago. This makes them the oldest open caves in the world, and may account in part for their complexity and density of decoration." For more detail check out http://www.worldheritage.org.au/resources/national-parks/jenolan-caves-np/.

Jenolan Caves House
Built in 1898 by the NSW State Government and altered in 1909, 1914 and 1923, Caves House is an example of what is known as "modified Queen Anne style". It is worth exploring. The dining room belongs to a different era as does the main stairway. Many of the rooms have been modified but the ancient plumping and corridors have ensured that the changes have been modest. It was the centrepiece for the Caves in their tourist heyday of the 1920s and 1930s when tourists had to stay overnight.

Bushwalking in the Area
The Jenolan Caves Conservation Reserve is a 2430 hectare flora and fauna sanctuary which lies at the western edge of Kanangra Boyd National Park. It is ideal for bushwalkers at it is rich in wildlife -  lyrebirds, wallabies, possums, kangaroos and wombats. There are three walks near the caves all of which are very conveniently available on a Free IPhone App called Jenolan Trails. See http://www.jenolancaves.org.au/the-caves/bushwalks/ for details. You have to download the app before you get there. Jenolan Caves does not have WiFi.

(1) Jenolan River Walk which starts at the entrance to the Grand Arch, covers 3 km round trip and, because it includes many stairs and the return trip is uphill, it takes around 1.5 hours to complete.

(2) Carlotta Arch Walk starts opposite Caves House and goes up to Carlotta Arch. It is only 1 km round trip, takes around 45 minutes and is of moderate difficulty.

Seeing the Platypus and its Family
The first rule is to be absolutely silent. The next rule is to arrive very early in the morning or late in the evening. The third rule is patience. The fourth rule is start looking for lines of bubbles - they are the sign that a platypus is swimming just below the surface. In the dammed pool below the Grand Arch cave (known as the Blue Lake) there are a number of platypuses (platypii) and while they are extremely shy (hence the name of the famous children's book Shy the Platypus) they will appear if you keep very quiet. The experience is magical. You will become of a very few people to have seen a platypus in the wild. Unforgettable.

The Six Foot Track
If you want a real experience of the Australian bush you can walk to Jenolan Caves from Katoomba on this historic track. The distance is a total of 42 km.

The Six Foot Track was created in the 19th century as a horse track from Katoomba to the Jenolan Caves. In 1884 a survey party travelled from Sydney, stayed in Katoomba, and the next day descended at Narrow Neck by a rough zig-zag path into the Megalong Valley where they established a base camp on the Megalong Creek. They were unhappy with the route and subsequently blazed a fresh route from the Megalong Creek up Nellie's Glen to the Explorers' Tree on Pulpit Hill. They eventually reached the Jenolan Caves on 3rd April, 1884, having marked the route with blazed trees. It took eleven days to mark the 26 miles (42 km) of track. The result was that travellers could now ride from Katoomba to the Jenolan Caves in less than eight hours. The new track became popular and was described in the 1894 issue of the Blue Mountains Railway Tourist Guide as 'steep in places, but the romantic beauty of the surroundings amply compensates for the roughness of the ground'. The Six Foot Track, as it became known, was maintained for many years by two men using a wheelbarrow, picks and shovels. In recent years it has been revitalised and has become an important and fascinating walking trail through the mountains. For more information check out http://www.sixfoottrack.com.au/?gclid=CN7roJPll7kCFYUzpAodRw0AfQ which offers an excellent three day, guided walk of the entire trail.

* the area was occupied by the Gundungurra Aboriginal people for an estimated 40,000 years before Europeans arrived.

* Some time between 1838 and 1841 a bushranger and escaped convict James McKeown became the first European to see the Caves. His discovery of the Caves and his subsequent capture was reported in the Argus newspaper: "James McKeown was an escaped convict ... whose presence on the main western road was for years excessively irritating to the settlers, on whose stores he laid an oppressive toll ... Whalan set out to track McKeown and followed him up hill and down dale for miles. After they had covered about 20 miles the bushranger suddenly disappeared ... The tracks led up to a wild cavern and into it ... and burst again into open day, and the route lay along a rugged gorge for some three miles. Here the bushranger again disappeared ... All about were evidences of careful cultivation, the bushranger having laid out quite a nice little farm. Satisfied that he had run down his bird, Whalan retraced his steps ... When he returned home he told his brother Charles of the strange country he had wandered into. 'I have been through the Devil's Coachhouse,' he said. Next day a party was made up, and with the aid of troopers McKeown was captured. His hiding place was a huge hole in the mountain-side, known now as McKeown's Hole."

* From 1867-1880 visitors had to take the train to Tarana railway station, continue by coach and walk down the valley where they camped in the Grand Arch before exploring the caves.

* In 1880 accommodation at the caves was completed and a road was built from Oberon.

* In 1884 a bridle track was constructed from Katoomba. By the late 1880s the road to the caves had been completed and visitors from Sydney could reach the caves in less than 24 hours.

There is comprehensive visitor information at the Caves Ticket Office. Before visiting check out http://www.jenolancaves.org.au/visitor-info/ which covers most of the frequently asked questions. Tel: 1300 763 311.

There are five types of accommodation available. All are controlled through the main website - http://www.jenolancaves.org.au/accommodation. They include the Jenolan Caves House; a motel-style Mountain Lodge; the Gate House which offers backpacker accommodation; Binoomea Cottage for groups and large families; and Jenolan Caves Cottages which are a short drive from the Caves.

There are a range of options from takeaway through casual to formal all within the Caves House complex. The formal is at Chisolm's Restaurant in Caves House, a delightful Victorian-era room serving Modern Australian cuisine.

There is an excellent and comprehensive website. Check out http://www.jenolancaves.org.au/ 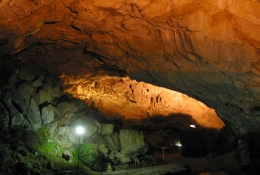 The Grand Arch is floodlit at night 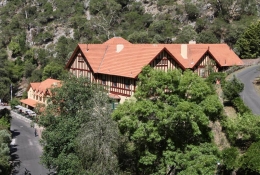 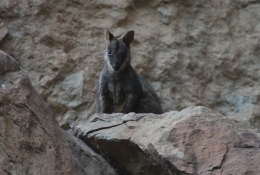 A rock wallaby watches visitors in the Grand Arch cave. 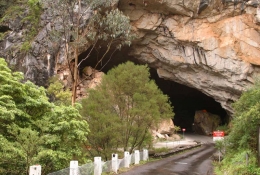 The Grand Arch - a dramatic way to arrive at Jenolan Caves 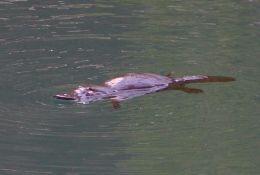 A platypus at dawn in the stream below Jenolan Caves 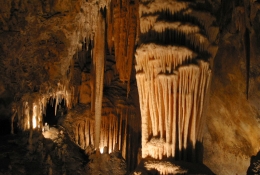 Impressive stalagmites and stalactites in the River Cave.