Jericho is a tiny rural service centre in a predominantly cattle-growing area. In 1993 there were 157,000 head of cattle in the district. Today it services the surrounding large land holdings.

Jericho is located on the Capricorn Highway 224 km west of Emerald, 90 km east of Barcaldine and 1054 km, via Toowoomba and Emerald, from Brisbane.

It is most likely that Jericho is a rather elaborate outback joke. One of the early settlers, in the 1850s, was a man named Harry Jordan after whom a local river - the Jordan River - was named. Some wit, noticing that a settlement was developing on the banks of the Jordan River, decided it should be named Jericho.

Crystal Trumpeters
The town has a remarkable ability to exploit its very dubious religious connections. In 1988 as a Bicentennial Project, the town decided to construct the 'Crystal Trumpeters' in memory of the Biblical story where the Israelites marched around the walls of Jericho for six days then blew their trumpets on the seventh day and watched as the city walls collapsed. The crystals (the connection of the Biblical story with the town is, to put it mildly, rather tenuous) symbolise various moments in the Old Testament including the slavery in Egypt, the parting of the Red Sea, the receiving of the Ten Commandments, the crossing of the River Jordan and the arrival in the Promised Land. The monument is located on the Capricorn Highway over the road from the Town Hall.
The sign at the Trumpeters explains: "Because Jericho, Queensland is built on the Jordan River south of the Lake Galilee, we decided to tell the story of the original Jericho (Joshua 6). The Israelites came. They marched once a day for six days and seven times the next day. Then they blew their trumpets and made a lot of noise so the walls would fall down and they could enter (Joshua 18-22). To understand why a bunch of desert nomads expected these tactics to work against a fortified city we have to go back 40 years before it happened. This is told in the outer circle of rocks (Exodus-Joshua). There is a drawing of the rocks and the trumpets which explains the functions of the 12 rocks - (1) Egyptian pillars - passover (2) Brick Path - Slavery in Egypt (3) Parting of the Red Sea (4) Trickling Fountain - Moses struck the rock (5) 10 Commandments (6) Stepping Stone Path - Manna (7) Feast of Quail (8) Fruit symbols - Moses sights the Promised Land  (9) Entrance Steps - Crossing of the Jordan River (10) One a Day for Six Days (11) Joshua Chapter 6 Verse 20 (12) Rainbow - the Promised Land.
The entire site was designed by Peggy Westmoreland. The crystals were designed by George Cain and it was constructed by Alvin Bonham.

Paving the Glory
Along the southern side of Darwin Street are a series of pavers which commemorate "the centenary of Anzac". The project was completed in 2014-2015 by the students in the schools in the Barcaldine Regional Council area. The sentences etched into the pavers are local children's thoughts about what the Anzac legend means to them.

Jericho Drive In Theatre
Located in Darwin Street, and beautifully preserved with pleasant lawns and good modern screen, is the Jericho Drive In Theatre where movies are still regularly screened. It opened in 1969, only has a capacity of 34 cars, has 34 seats for those who don't want to sit in their cars, and operates once a month on a Saturday. It is recognised as the smallest Drive In in Australia. Tel: (07) 4651 4129 for times and other details.

Town Mural
With a sense of outback fun there is a mural on the side of a corrugated iron shed in Darwin Street of three goannas having a beer and leaning over a fence. Very outback and very Australian.

Black's Palace now known as 'The Palace'
The Black's Palace sites, located on Marston Station (it became part of Tumbar in 2016) some 60 km south of Jericho, are the largest complex of art sites known to exist in Central Queensland. The paintings are set on the sandstone cliff faces of a gorge which is about 500-600 metres long and about 200 metres wide. Anthropologists have recorded some 9,471 figures in the area ranging from stencils of hands, feet, boomerangs and axes as well as drawings of spears, clubs, shields, snakes and lizards. There are a large number of abstract patterns as well. It is well worth a visit. Tragically the site is now closed to the public. It is sad that such an important site is not open to those who wish to inspect this remarkable piece of Australian culture.
In 2014 the ABC reported: "Traditional owners in Queensland's west say they have got widespread support to open up an internationally significant site for tourists. The Bidjara people say the site, known as Black's Palace, dates back around 4,000 years and contains about 10,000 rock art stencils. It is located on private property between Jericho and Tambo, south-east of Longreach. Elder Leann Thompson says "the Palace" is also a burial and a women's site. She says traditional owners are eager to see it open for tourists within a few years.
"I would like to think in about two years," she said. "One of the challenges and an opportunity that we have to get over is ownership of the site, because at the moment the state owns the site. It is a significant international site - it is a burial site and it is also a women's site."
She said at one time there were about 40 burials.
"The site is also about birthing and it has about 10,000 stencils at the site as well, or artwork," she said. "It is only a reasonably young site, so it only goes back about 4,000 years." The Bidjara people have met local councils and other authorities as part of ongoing negotiations. In 2019 the site was not open to the general public. There is detailed information available and photographs of the site at the Universal Garden Centre in Shamrock Street, Blackall. The man who runs the Museum has extensive knowledge.

* Prior to the arrival of Europeans the area around Jericho was occupied by the Bidjara Aboriginal people.

* The first Europeans in the area were a party led by Major Thomas Mitchell who passed through the area in 1846.

* A branch railway line from Jericho to Blackall was built in 1908.

* In 1933 'The Palace' was declared a Scientific and Recreational Reserve.

* In 1970 'The Palace' was gazetted as a permanent Aboriginal site.

* By 1971 the owner of Marston Station was appointed as the honorary warden of the site.

* In 1989 The Palace came under the control of he Department of Environment and Heritage.

* In 2008 Jericho became part of the Barcaldine Regional Council. 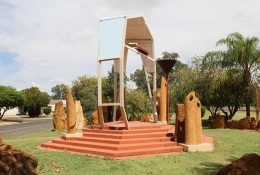 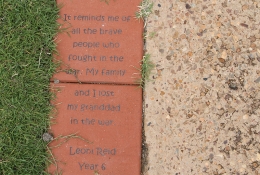 Pavers on the Paving the Glory Anzac memorial 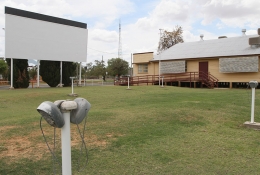 The Drive In Theatre in Darwin Street 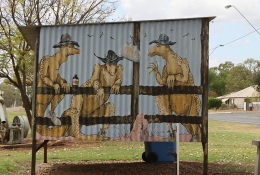 The mural of the three lizards - in the main street