Jerry's Plains is a tiny, "now you see it now you don't", rural village serving the rich river flats of the Hunter River.

Jerrys Plains is located 203 km north of Sydney via Peats Ridge Road and the Putty Road. It is 225 km via the Newcastle Freeway and Cessnock.

There is considerable debate about the origin of the town's name. Certainly John Howe, who led an expedition through the district in 1820, reported that one of his Aboriginal guides, a man named Myles, informed him that the local Kamilaroi people called the area 'Pullmyheri' or 'Pullumunbra'. This name was never used. Instead it became Jerrys Plains either because the chief of the local Kamilaroi was named King Jerry or because it was named after Jeremiah Butler, an ex-convict and member of Howe's expedition who accidentally discharged a firearm, blew off his thumb, had gangrene set in, died and was buried opposite where the post office now stands.

Post Office Store
At one time it was the town's post office and then the town's visitor information centre, the Post Office (which is located on the left hand side of the road past Wambo Street for those coming from the New England Highway) was designed by the James Barnet, the Colonial Architect at the time, and built in 1881. It is one of 169 post offices designed by Barnet and is notable for its foundations of locally quarried sandstone and its handmade bricks. It is still an impressive building.

School and Police Station
One block from the town's main street, up Piribil Street, is Doyle Street which has so many impressive buildings it has been classified by the National Trust. These buildings were all constructed around 1880 and include the sandstone teacher's residence, the very elegant public school (1879) built in the Gothic style and, across the street, the police station (1880) with its hipped roof over an elegant veranda and its vented gable. They were all built from local sandstone which was quarried behind the school.

Churches
On the main road, just west of Poppong Street, is St James Anglican Church (1875-79), a gracious village church designed by J. Horbury Hunt, a Canadian who settled in Australia and worked for Edmund Blacket before establishing his own practice and gaining a reputation for designing buildings characterised by 'freshness, vitality and originality.' In the case of St James it is worth noting "the decorative chancel arch which extends to the exterior of the church as buttresses and a stepped bell tower. There are arched lancet windows and the walls are of rough-faced sandstone. The rose window in the side wall of the chancel was designed to cast a glow over the morning service."

Stowan and Coolmore
Head out of town towards Denman on the Golden Highway and you will pass through rich rural countryside known for cattle, vineyards and horse studs. About 5 km out of town is Coolmore, a huge horse stud, which is located on land originally granted to James Robertson in 1825.

Hollydene Estate Wines
Beyond Coolmore Stud is Hollydene Estate Wines at 3483 Golden Highway. The cellar door is open seven days from 10.00am - 4.00pm and there is a restaurant, tel: (02) 6576 4021. In 2011 Hollydene took over the Arrowfield estate, one of the oldest vineyards in the Hunter Valley. George Bowman was squatting on the land as early as 1824 and he progressively purchased it between 1834 and 1841. A section of the cellars was constructed by convicts in 1832. The Bowman family sold Arrowfield in 1893. Check out http://hollydeneestate.com for more details.

* As early as 1817 a mineralogist named William Parr explored as far north as the hills above Doyles Creek and reached land to the south-west of Jerrys Plains.

* In 1819 an expedition led by John Howe, and including George Bowman who squatted on what is now Arrowfield Estate, returned to where Parr had explored and followed Doyle's Creek until it reached the Hunter River. They followed the Hunter downstream to where Jerrys Plains now stands before returning to Sydney.

* In 1820 the expedition returned and followed the Hunter River downstream to Maitland. John Howe was accompanied by an Aboriginal guide named Myles who explained that the land was known as 'Coomery Roy', the land of the Kamilaroi people who called it 'Pullmyheri' or 'Pullumunbra'.

* In 1825 land was granted to Cyrus Doyle, the son of a convict, at the junction of the Hunter River and the creek that took his name.

* In the 1840s the local postmaster was Charles Harpur, an important early Australian poet, who married Mary Doyle, the daughter of Edmund Doyle. It is known that some of Harpur's love poetry was addressed to Mary Doyle.

* The first Jerrys Plain was located on the banks of Redmanvale Creek east of the present town.

* By 1840 there was an attempt to move the village westward. The site was surveyed but land sales did not occur until 1857 and the village was divided until the 1870s.

* The huge Hunter River floods in 1955 eventually saw the last of the old village washed away.

There is no visitor information in Jerrys Plains. The closest is the Singleton Visitor Information Centre, 39 George Street, Singleton, tel: (02) 6571 5888

There is no local, specialist website on Jerrys Plains. 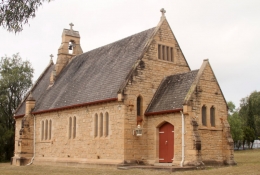 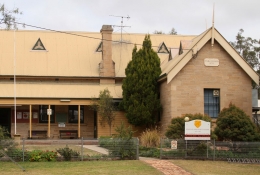 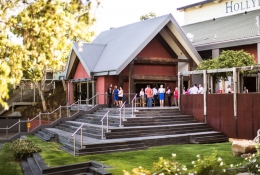 The cellar door at Hollydene.