House once known as "the Mecca of Civilisation on the Darling Downs".

There are two Jimbours: a tiny village with a Post Office, a butcher's shop, a primary school and a few houses - and an elegant historic home which is now a popular wedding venue, a destination for lovers of great gardens, and a place where special music events - Opera at Jimbour is notable - are held. In its heyday, Jimbour was known as "the Mecca of Civilisation on the Darling Downs". By 1848 it covered 200,000 acres and was owned by the Bell family. Prior to 1844, when it was reduced in size, it had stretched from the Bunya Mountains to the Condamine River and from the present site of Dalby to Jandowae. Jimbour became nationally famous in 1844 when the explorer, Ludwig Leichhardt, used it as a base for his journey across western Queensland which eventually reached Port Essington in the Northern Territory. By 1874 the owner, Thomas Bell, had built one of the largest and most prestigious houses in rural Australia. It may be a small settlement but the claims it makes in the history of early Queensland are large.

Jimbour is located 28 km north from Dalby and 238 km north-west of Brisbane. Jimbour House is located 2 km east of the village.

In 1845 Thomas Bell purchased the property. It was registered as "Gimba" or "Jimba", words in the local Aboriginal language meant "good pastures". The spelling was subsequently changed to Jimbour.

Jimbour House
Jimbour House was built by Thomas Bell in 1874 after a design by Brisbane-based architects, Richard Suter and Annesley Welsley Voysey. Bell had already built a substantial home from bluestone and cedar in 1870 (parts of it can still be seen at the back of Jimbour House) but it was the mansion which would leave its mark.
Mr Harry Ensor, who supervised the whole of the building operations, acquired the cedar for the building from the Bunya Mountains. It was brought down to Cattle Creek, where it was sawn, dressed, and worked up for the building. The building also used spotted gum, blue gum, ironbark, bunya, cypress, hoop pine, and some satinwood.
The stone and sand for the building were purchased from Bunjinnie about six miles from Jimbour. The total cost of the building was about £30,000 with skilled tradesmen (there were ten stonemasons and 9 carpenters) being paid £3/10/- per week and the labourers receiving £1 a week. The hours of work were from daylight to dark. Jimbour House was seen as the height of modernity. Water and gas were laid on, the gas being generated from coal from a mine on the property. Water was pumped to the top of a 40 ft tower by the first windmill erected in Queensland. The architectural highlights of the building were the slender Tuscan columns at the front of the building, the ornate French doors, the broad verandas on the front and side, and the roof which was covered with imported Welsh slate. The building had 24 rooms and was 23,000 square feet
The house was used as a setting for the TV mini-series Return to Eden (1986) and The Second (2018). The complex includes the Leichhardt House as well as a church, a very unusual wooden three storey house (which contains the original water tower) and a huge propellor. There is a detailed explanation of the history and significance of the building at https://environment.ehp.qld.gov.au/heritage-register/detail/?id=600941. It explains the building's significance in terms of "It is unique in Queensland as the only really grand country house in the English manner to be built in this State ... Jimbour House has outstanding aesthetic significance as a well designed and constructed house that is pleasing in form, materials and detail. It sits within notable gardens and is a landmark against the flats of the surrounding landscape."

The Jimbour House Living History Walk
There are a total of 13 places of interest on the Jimbour House Living History Walk. They are outlined, complete with a map, at http://jimbour.com/23-2/living-history-walk and include:
1. The 40-foot water tower built at the time the house was completed.
2. A Monument to the Bell family who built and owned the house.
3. An impressive jacaranda avenue which was planted by Charles Russell in the 1930s.
4. The chapel which predates the house. It was built in 1868.
5. Jimbour House itself.
6. The rose garden and central fountain. The rose garden dates from the late 1800s and the central fountain was commissioned by Charles Russell.
7. The target tree which has been used for target practice.
8. The kitchen garden where watermelons, giant Atlantic pumpkins, Turkish turban, jack be little, butternut, delicate mini sweet and trombone gramma pumpkins, hales best, rockmelon, zucchini, squash and cucumbers are all grown.
9. The poultry farm area
10. Bull Stalls
11. The aeroplane hanger
12. The Horse Stables
13. The Blue Stone Building which was built by Thomas Bell in the late 1860s.

Leichhardt Plaque
Entering Jimbour from the south there is a sign (HISTORICAL SITE) pointing towards a plaque which was laid in 1955 by the Royal Geographical Society and which recalls Leichhardt's journey. Near the plaque is an interesting old engine known as the Jimbour Tractor - it is a 1920s Clayton and Shuttleworth internal combustion engine - and over the road is the Jimbour Butcher.

Jimbour Dry Stone Wall
On the road from Jimbour village to Jimbour House there is evidence of a dry stone wall which is of considerable historic interest. "Extending some four miles and originally constructed to a height of about five feet, the wall stands as a memorial to the tenacity and skills of early pastoral workers and was recently listed on the Queensland Heritage Register. Once dubbed the ‘Great Wall of Jimbour’, it sheds light not only on early technologies of land management but also of cultural and spatial adaptation by European settlers." It was built in the 1870s and ran along the ridge. No one is sure why it was built although it was supposed to "divide the Jimbour run" and some experts think it was to keep wallabies from the home paddocks. There is a detailed history which can be downloaded by typing "Great Wall of Jimbour by Michael T. Davis" into Google and there is a map at https://environment.ehp.qld.gov.au/heritage-register/detail/?id=602415#!lightbox-uid-3.

Ludwig Leichhardt at Jimbour
The German explorer, Ludwig Leichhardt, reached Jimbour in August 1844. Leichhardt had been in Australia for two years when he heard of plans for an expedition from Sydney to Port Essington - an outpost on the coast of the Northern Territory. The expedition was to be led by Sir Thomas Mitchell but governor of the time, Governor Gipps, declared that it was "an expedition of so hazardous and expensive a nature, without the knowledge and consent of the Colonial Office." Irritated by this delay Leichhardt organised his own expedition. With a party of six he left Sydney on 13 August 1844. They were joined by another four people in Moreton Bay. They then rode to Jimbour which, at the time was the last outpost of settlement. On 1 October they left Jimbour and for the next fifteen months they traversed western Queensland and the north-eastern section of the Northern Territory (a distance of nearly 5000 km) arriving at Port Essington exhausted on 17 December 1845. When they finally returned to Sydney on 25 March 1846 Leichhardt was greeted as a hero and hailed as the 'Prince of Explorers'. By this time people in Sydney had assumed that the party had perished so much of their delight was based on surprise as much as an acknowledgement of Leichhardt's achievements. As a result of Leichhardt's glowing reports on the land beyond Jimbour there was a push for settlement of the Darling Downs, the Dawson River area and the Central Western region of Queensland.
Leichhardt's life was the subject of Patrick White's novel Voss. In the novel White describes Voss' (Leichhardt's) arrival at Jimbour in a wonderfully evocative passage which conjures the riches that the Darling Downs still have to offer: "By now the tall grass was almost dry, so that there issued from it a sharper sighing when the wind blew. The wind bent the grass into tawny waves, on the crests of which floated the last survivors of flowers, which shrivelled and were sucked under by the swell." The house in which Leichhardt stayed at Jimbour (this was well before the building of the current mansion) was a primitive slab hut which sadly burnt down in 1867.

* Prior to the arrival of Europeans the area was inhabited by members of the Barungam Aboriginal language group.

* The area around Jimbour was first explored by Allan Cunningham in 1827.

* By 1840 part of the Darling Downs had been settled by the Leslie Brothers.

* Jimbour Station came into existence in 1842 when Richard Todd Scougall settled in the area. Scougall's stay at Jimbour was brief.

* In 1843 an Irishman, Thomas Bell, purchased the property including all sheep and cattle, for £3,000. It was registered at this time as 'Gimba' or 'Jimba'. Both words were said to be the local Aboriginal word for 'good pastures'. A few years later the spelling was changed to Jimbour.

* It was to this property that Ludwig Leichhardt came in August 1844. On 1 October Leichhardt left Jimbour and for the next fifteen months traversed western Queensland and the north-eastern section of the Northern Territory arriving at Port Essington exhausted on 17 December 1845.

* The house in which Leichhardt stayed at Jimbour was a primitive slab hut which burnt down in 1867.

* In 1881 Jimbour House and 100 acres were separated from the larger property.

* In the 1950s a swimming pool and airstrip were added to Jimbour House.

* In the late 1990s a vineyard was added to the Jimbour House property.

Jimbour House has its own website with information about the accommodation and eating as well as the history of the property. Check out http://jimbour.com. 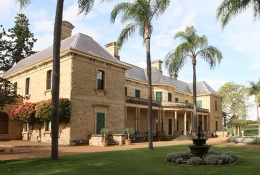 The front of Jimbour House 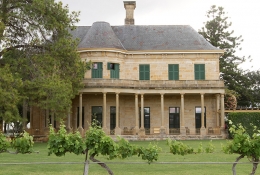 The side view with grape vines 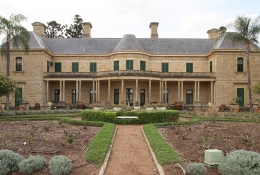 The front entrance to Jimbour House 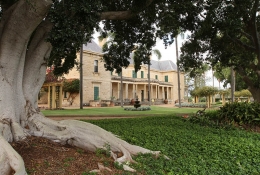 The house framed by the huge trees in the garden