New town at the edge of the Kosciuszko National Park.

Jindabyne is located 471 km south west from Sydney via the Hume Freeway, Monaro Highway and Kosciuszko Road. It is 73 km from Cooma and 991 metres above sea level.

The town was originally spent "Jindaboine" which was a local Aboriginal word for "valley".

Statue of Count Paul Strzelecki
Beside Lake Jindabyne the Australian Polish community have built a huge statue of Count Paul Strzelecki who explored the Snowy Mountains and named Australia's highest mountain. The plaque on the statue reads: "Sir Paul Edmund Strzelecki. Born in Poland on 20 July 1797. Arrived in Australia on 25 April 1839. From 1839 to 1843 he explored and surveyed vast areas of New South Wales, Victoria and Tasmania. While exploring in the Snowy Mountains region he discovered and climbed Mt Kosciuszko which he named in honour of the Polish leader and patriot Tadeusz Kosciuszko. He discovered gold and silver in New South Wales, coal deposits in Tasmania, investigated the possibilities of irrigation, measured the heights of mountains, carried out soil analysis and collected and identified many fossils and minerals. Paul Edmund Strzelecki was one of the first scientists in Australia to undertake investigations in many fields including geology, meteorology, zoology and mineralogy."

Sculptures By the Lake
Each Easter long weekend the Lake Light Sculpture exhibition and competition is held on the shores of Lake Jindabyne. It complements the sculptures which are already on display. In Banjo Paterson Park there is the impressive, rather Soviet-style sculpture of Count Paul Strzelecki and nearby is an Irish harp, a "memorial to the Irish men and women who worked on the construction of the Snowy Mountains Scheme."

Jindabyne Community Trail
The best way to enjoy Lake Jindabyne is to take the Lake Jindabyne Community Trail which winds around the lake from Banjo Paterson Park for 9.51 km until it reaches Hatchery Bay. The first section, which passes the statue of Count Paul Strzelecki, some works of sculpture and The Clay Pits is 4 km and is a sealed path which is shared with cyclists. The second section, which is a dirt path, starts at Widows Inlet and continues around the shoreline to Hatchery Bay. It is proposed that south of Banjo Paterson Park the trail will continue across the Jindabyne Dam Wall and for over 7 km until it reaches the Tyrolean Village.

Jindabyne Churches
1. St Columbkillies Catholic Parish Church
The original St Columbkillies Catholic Parish Church existed in the Jindabyne that was drowned by the rising waters of Lake Jindabyne. When new Jindabyne was built a new church was constructed and was opened by the Archbishop of Canberra-Goulburn on 21 March, 1966. It was estimated to have cost $60,000 part of which was paid by the Snowy Mountains Authority. There is a good account of the removal at http://www.monaropioneers.com/jindabyne/st.columkilles.htm.

Lake Views
There are a number of impressive, panoramic viewing places around the lake most of which are on the main road - Kosciuszko Road and the Alpine Way - they offer panoramic views across Lake Jindabyne.

Trout Fishing
Lake Jindabyne is recognised as one of the best trout fishing destinations in the Snowy Mountains. It is fed by the Snowy, Thredbo and Eucumbene rivers and holds brown, rainbow and brook trout as well as Atlantic salmon. The excellent Snowy Mountains Fishing website (http://snowymountainsfishing.com.au) notes: "There are no boating restrictions on Lake Jindabyne and there is a concrete boat ramp near Snowline Caravan Park, along with numerous other launching points around its foreshores for smaller boats. All methods of fishing are permitted however, as with all waters within the region, a New South Wales Freshwater Anglers Licence is required. These licences may be purchased online, or at fishing retailers in the region." It also has information about the Gaden Trout Hatchery and Steve Williamson's Trout Fishing Adventures.

* Prior to the arrival of Europeans the district was inhabited by Thaua and Ngarigo Aboriginal people.

* The Pendergast brothers, sons of an ex-convict, settled in the area in the 1820s.

*  By the late 1830s both the Pendergasts and the Ryries had runs and were raising sheep and growing a little wheat.

* In 1890 Banjo Paterson wrote The Man from Snowy River about the area.

* Rainbow trout were first released into the Snowy River in 1894.

* The Alpine Way from Jindabyne to Khancoban was opened in 1956.

* Modern day Jindabyne is a new town created after the original settlement was drowned by the Snowy Mountains Hydro-electricity Authority in the late 1960s.

There is an official site. Check out http://www.visitnsw.com/destinations/snowy-mountains/jindabyne-area. 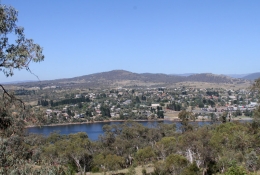 View of Jindabyne from the lookout above the Tyrolean Village. 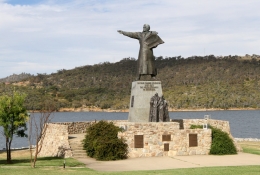 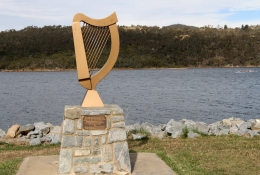 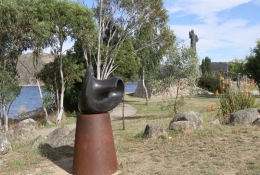 A sculpture beside the Jindabyne Community Trail. 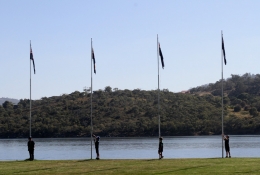 Raising the flags beside Lake Jindabyne on Australia Day. 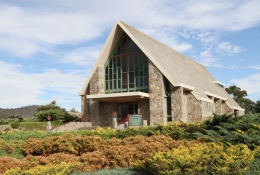 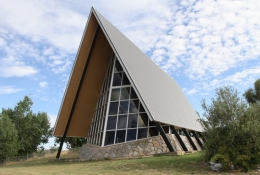 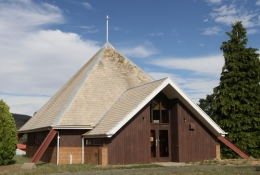 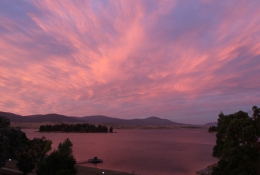 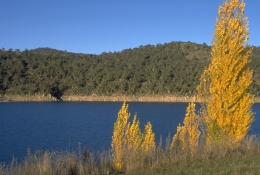 Autumn poplars on the shore of Lake Jindabyne.