Jindera is a small town 16 km from Albury which is known primarily for its excellent historic museum which has been operating since 1968 when it was opened by the painter, Russell Drysdale. The museum proudly includes a slab hut, a wattle and daub homestead, an art gallery and a General Store established in the nineteenth century.

Jindera is located 550 km south-west of Sydney via the Hume Motorway and 342 km north-east of Melbourne via the Hume Freeway. It is 16 km north of Albury.

Jindera was gazetted as a town in 1869. No one is sure what the word means but one amusing story argues that the town was named after an Aboriginal couple named Jim and Dora.

Pioneer Museum
The Pioneer Museum is a celebration of the culture of the early German settlers who arrived in the area in 1867 having travelled from the Barossa Valley area of South Australia. The museum has an extensive collection of furniture, household goods and machinery located in an historic setting of old world architecture and charm.
The visitor enters through the fully furnished general store and residence before moving out the back to the Pioneer slab hut and the original wattle and daub cottage, the huge machinery shed with its collection of farm machinery and equipment. Wagner's store was first opened in 1874 and closed when the son of the original owner died in 1950. Peter Wagner was an important local citizen. He planted most of the town's elms and pines.
Wagner's Store, the museum's centrepiece, has been restored and furnished to recreate its nineteenth century appearance. The hitching rail where customers  tied their horses is still outside and inside, behind a cedar counter, are the old containers and canisters. German books and pictures of the Kaiser demonstrate how deeply German the new settlers were. The museum is open Tuesday-Sunday from 10.00 am - 3.00 pm from May to September and 10.00 am - 4.30 pm from October to April. The museum curators estimate it will take 90 minutes (minimum) to see all the exhibitions. Contact 0408 409 842 for more information. Check out http://www.jinderamuseum.com.au.

* Prior to the arrival of Europeans the area around Jindera was inhabited by the Wiradjuri people.

* The first Europeans into the area were the explorers Hume and Hovell in 1824 making their epic journey from New South Wales to Port Phillip. They reported on the richness of the grasses in the district.

* It was a friend of Hamilton Hume, a settler named John Dight, who, hearing of the richness of the area, arrived and occupied 45,000 acres (18,220 ha) only 2.5 km north of the present day Jindera.

* Slowly a small village began to develop on Dight's land. It was briefly known as Dight's Forest.

* Some time in the 1840s a wattle and daub hut was built on the site of the village. It now stands in  the Jindera Pioneer Museum and claims to be the oldest building in the Albury Shire.

* In 1867 German settlers travelled from South Australia along the Murray River in horse-drawn wagons searching for land. They settled in Walla Walla and Jindera.

* By the late 1880s Jindera had four hotels, a butcher, baker, saddler, carpenter, dressmaker, police station and a flour mill.

* On 5 October, 1968 Wagner's Store became the Jindera Pioneer Museum. It was opened by Russell Drysdale, the famous painter.

Jindera Pioneer Museum has its own, very useful, website at http://www.jinderamuseum.com.au. 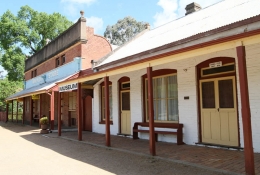 The Pioneer Museum consists of several historic buildings centred around Wagner's store which first opened in 1874. 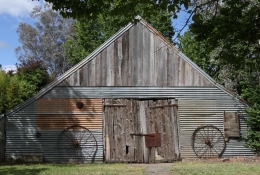 The old blacksmith's shop over the road from the Pioneer Museum.