Home of a tourist attraction which recreates a 19th century Queensland rural township.

As a township Jondaryan is a tiny, unimportant village on the Warrego Highway. It is little more than a pub and a few houses. The sole reason the traveller stops, and turns at the pub, is the historic Jondaryan Woolshed - Historic Museum Complex.

Jondaryan is located 169 km west of Brisbane and 45 km from Toowoomba on the Warrego Highway.

The first European settler in the district was Charles Coxon who arrived in 1842 and named his property Jondaryan presumably after the Barunggam word 'Jondooyan' which may have described a waterhole on the Oakey Creek.

The Woolshed at Jondaryan
The Woolshed at Jondaryan started as an historic museum and, over the years, it has grown into a major venue for weddings, conferences, corporate functions and events like the Jackie Howe Festival and the Great Aussie Barbecue. It also offers accommodation in cottages and the Shearer's Quarters. While the complex consists of a large number of buildings and a museum with an impressive collection of shearing memorabilia, the centrepiece is the historic Jondaryan Woolshed which has been listed by the National Trust.

The National Trust describes the building as: "A long, low and spacious 56 stand woolshed [there was a time when 88 shearers were squeezed onto the boards], built partially of imported materials, some of which came from London. These include rafters, beams and corrugated-iron roof cladding while the cedar employed in the pen and chute doors, and the hand-hewn ironbark slabs which comprise the walls are from local sources. At the time of its construction, in 1859-60, it was the largest shearing shed in Queensland.

"Built in the vernacular, the wool shed's T-shaped composition addresses only the immediate requirements of processing large numbers of sheep from the yards and of filtering the climatic extremes. In the case of the former its open plan interiors, incorporating rafters covering a great span, facilitating maximum flow of sheep, while in the latter the gently sloping roof culminating in wide overhanging eaves guaranteed both ventilation and shade for the workers.

"Once the centre of the Darling Downs sheep industry, 'Jondaryan' was, in 1842, one of the first free selections taken up in the area - the same year that Governor Gipps declared that 'all settlers and other free persons shall be at liberty to proceed to the Darling Downs in like manner as to any other part of the Colony.'

"By the 1860s the property had become the largest freehold station in the state of Queensland, running some 150,000 sheep on its 62,700 hectares expanse. Inevitably, as free settlement pushed onwards, grain began to encroach on the sheep's pastures. At the end of World War 11 'Jondaryan' was subdivided for soldier settlement.

"This woolshed is a remarkable vernacular structure which has fundamental historical associations with the development of the Darling Downs district and those early pioneers who were connected with it." It is so large that today it can cater for nearly 1,000 people at a conference or wedding.

The Woolshed was designed by James Charles White, the manager of Jondaryan Station at the time, and it cost £3,3000 and was completed in 1861. It was one of the first buildings in Queensland to use corrugated iron which, at the time, had to be hand-rolled, hand-dipped, hand-wrought and hand-corrugated.

"The Woolshed hosted the first ‘Shearers Feast’ in 1861 to celebrate the first shear and to farewell its designer and Station Manager James White. The two-day event featured horse racing, foot races, novelty events and competitions as well as a feast and a ball. It was so successful that White’s replacement made it an annual event and the shearers’ feast became a major social event for the whole district."

111 years later, in 1972, a ball was held at the shearing shed to commemorate that first ball. At the ball it was decided to create the Jondaryan Woolshed Historical Museum as a "living memorial to the historic pastoral industry and the pioneers of rural Australia".

In 1973 the Rutledge family, who owned the property, offered 12 acres to the local community. In 1976 the society received a grant of $10,000 from the Federal Government to restore the deteriorating woolshed. Inevitably there were arguments with the society and the National Trust disagreeing on, of all things, the guttering of the woolshed. The society wanted to replace the brackets which held the guttering. The original iron brackets were no longer available. A local blacksmith could make the same pattern but not with the same iron. Eventually the National Trust agreed to this minor alteration.

Slowly the complex began acquiring buildings from the surrounding area. In 1977 the original Jondaryan blacksmith's shop (1850) and the old Woodview School (1886) were moved to the site. In 1978 the society acquired an old shepherd-boundary rider's hut and the Youth Hostels Association established a hostel in the old shearers' quarters. The following year the complex was expanded by a blacksmith-made windmill and the Evanslea wheat handling shed and in 1980 the old police lockup from Peranga was added. In 1984 the Lagoon Creek homestead and the Bank of New South Wales building were acquired In 2002 the Jondaryan Shire Council assumed the ownership and management of the Woolshed and when it came under the control of the Toowoomba Regional Council a company, Jondaryan Woolshed Pty Ltd, was established to run the complex for the benefit of the community.

Jackie Howe: Festival of the Golden Shears
In August each year Jondaryan hosts the Jackie Howe Festival of the Golden Shears (named after the most famous shearer of them all). It is a three day festival which aspires to recreate life in a shearing shed in the 1890s with blade shearers, wool classers, tar boys and rousabouts. Shearers from all over the world come to the event. For more information check out http://www.jondaryanwoolshed.com.au/goldenshearsfestival/.

St Anne's Church
On the Jondaryan-Evanslea Road heading towards the Woolshed at Jondaryan is the small timber St Anne's Church which was built in 1859 and designed by James Charles White, the manager of Jondaryan Station at the time. It is said to be one of the earliest churches in Queensland. It was built from hand sawn and dressed ironbark slabs and is said to be the oldest timber church in the Diocese of Brisbane.

Acland
Located 12 km from Jondaryan is the tiny settlement of Acland where controversial shock jock and Liberal Party enthusiast, Alan Jones, was schooled. He started school in Acland in 1946. The town used to have one of the most interesting coal mining museums in the country. Privately run, the museum operated until the 1980s and was sited on the old Acland coal field. It was recognised as a significant historic coal mine. Sadly it is now closed, but is still recognisable as a remnant of a previous era of coal mining in the area. In 1999 New Hope Coal established the open cut New Acland Mine and, anticipating that the mine would cut through the town, they systematically purchased all the houses in the town ... except one. So this town which won the first Queensland Tidy Town award in 1989 (there is still a sign celebrating the award) is now a ghost town with a closed mining museum.

In recent times Acland has become something of a cause celebre. Alan Jones has railed against it regularly on his radio show and has attempted to save it. This is unlikely as the mining company now owns most of the houses and all that is left, in the distance, is a huge open cut mine. Not surprisingly large coal trucks are the most common transport on the surrounding roads.

* The first European settler in the district was Charles Coxon who arrived in 1842 and named his property Jondaryan presumably after the Barunggam word 'Jondooyan' which described a waterhole on the Oakey Creek.

* Jondaryan was purchased by Robert and Edwin Tooth (famous for their beer) in 1856.

* By the 1870s Jondaryan was the largest pastoral station in Queensland covering over 62,750 ha.

* The railway arrived in 1868. It ran from Toowoomba to Dalby.

* In 1889 Jondaryan became the first sheep station in Queensland to employ union-only labour.

* In 1904 the town had four hotels, two blacksmiths and a number of stores.

* A total of 57 local men served in the Australian armed forces during World War I.

* By the 1940s Jondaryan Station had been broken up into smaller holdings.

* Today Jondaryan is a magnet for people wanting a wedding or conference in a huge woolshed.

There is information available at The Woolshed at Jondaryan. The nearest visitor information centre is the Toowoomba Visitor Information Centre, 86 James Street, tel: 1800 331 155.

The Woolshed at Jondaryan has a useful website. Check out http://www.jondaryanwoolshed.com.au/. 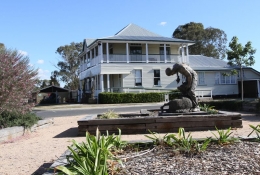 The old bank, now the Information Centre, and the shearer statue in the grounds of Jondaryan. 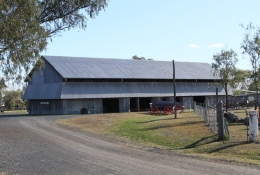 Evanslea Shed, part of the historic complex at Jondaryan. 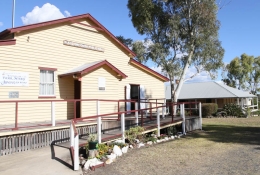 Flagstone Creek Public School - one of the many buildings on the Jondaryan site. 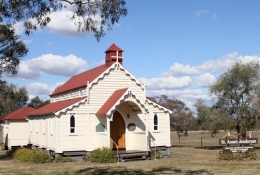 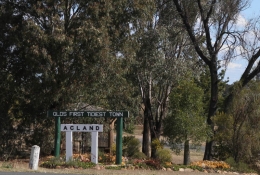 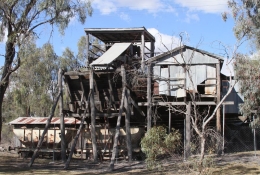 State Heritage Listed, and now crumbling, the old Ackland colliery is "the most intact mine site of its age and type in Queensland." 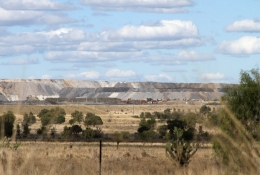