Julia Creek was the first European settlement in north western Queensland. It has always been a service centre for the surrounding wool and sheep properties and today, increasingly, it is a stopping point for people driving from Townsville to Mount Isa and the Northern Territory on the Overlander's Way. Home to the rare and endangered Julia Creek Dunnart it promotes this strange marsupial which can be seen at the town's excellent At The Creek Visitor Centre.

Julia Creek is located 647 km west of Townsville, 1,628 km north west of Brisbane via Toowoomba and Longreach, and 411 m above sea level.

The town is named after Donald McIntyre's niece - Julia Campbell who lived near Bendigo in Victoria. McIntyre reached the area in 1862 after travelling up the Darling River. He established a property named Dalgonally 70 km from the present town. The creek was originally named Scorpion but, in 1870, it was changed to Julia Creek.

Historical Walk
Located around the town are a total of 36 historical sites each with a detailed sign which explains the history and importance of the site. There is a map and a brochure available at the Visitor Centre. The signs are blue and they are numbered. Thus, "5. The Old Fire Station - The first Fire Brigade was built by Mr Ray Mobbs in 1962 costing £1659 ($3318). The Willys Jeep Fire Engine, now housed in the museum grounds, was the first recognised Fire Brigade vehicle used here for twenty eight years and later retired in 1990."

Spirit of the Lighthorse Sculpture
Located outside the Julia Creek RSL is a sculpture titled "Samson" which was created by artist Sue Tilley using vintage metal objects collected from around the town. Samson is complemented by a series of Light Horse Brigade silhouettes. They are designed as a tribute to the spirit of the ANZACs.

Gannon's Hotel
Popular novelists are transient. During the 1940s and 1950s Nevil Shute wrote a number of hugely popular novels. In 1950 he published A Town Like Alice. In the novel Julia Creek achieved a small moment of fame when Shute had the hero, Joe Harman, overland 1400 cattle from the Gulf of Carpentaria to Julia Creek. Harman stays at the fictional Post Office Hotel which was clearly based on Gannon's Hotel, which is over the road from the Post Office. The fact that there is a Post Office Hotel in Cloncurry may mean that Shute was fictionally blending the two towns. The hotel featured in the movie A Town Like Alice. Built in 1925 it burnt down in March, 2015. Today the hotel, which vaguely resembles the original but looks modern, is located directly opposite "At the Creek", the town's Visitor Information Centre

Duncan McIntyre Museum
The Duncan McIntyre Museum (named after the brother of first European settler in the area) is located in Burke Street. It is free and the collection includes shire records, old photographs and farm equipment relating to the early sheep and beef industries. It also has fossils which are over 110 million years old and were found in the local area.

At The Creek Displays
The local Visitor Centre, located in historic railway fettler's cottages at 34 Burke Street, has a number of impressive audio visual displays which look at Julia Creek and the importance of water to the region as well as the people and the country around the town. The excellent website - http://www.atthecreek.com.au/web/at-the-creek/what_to_see - has detailed information on the Visitor Centre. It notes "Outside, paths not only lead to a central outdoors display but also follow special themes. The Creek Path uses the rich colours of the region and indicates the abundant channels and creek systems. The Diagonal Path is straight and reflects the era of European explorers and settlers. And the central display where the paths intersect is the Artesian Bore, highlighting the importance of artesian water to the region." It is open from 9.00 am - 5.00 pm Monday to Friday and 9.00 am - noon on Saturdays.

Julia Creek Dunnarts
One of the quirky attractions at the At the Creek Visitor Centre are the two dunnarts which are fed daily at 10.00 am and 3.00 pm between April and September. There is a website dedicated to these tiny marsupials which describes them as "about the size of a large mouse, but that’s where the similarity ends, the dunnart is a nocturnal, insect eating, marsupial with sharp dog-like teeth and a pointy snout. They're lean, mean and rarely seen!" Learn about them at http://www.juliacreekdunnart.com.au and then see them at the Visitor Centre. Because they are nocturnal it is rare to see them outside feeding time. You should ensure you visit at either 10.00 am or 3.00 pm.

Nature Trail
The caravan park is located at the northern end of Julia Street and behind it is a walking circuit which goes down to Julia Creek (frequently without water) and is a pleasant 45 minute stroll. It is possible, particularly in the early morning and late afternoon, to see local birds and wildlife. The Visitor Centre has a list of birds that can be seen around the town.

Eddington Arms Hotel
Located 29 km west of Julia Creek (turn off the Flinders Highway 22 km from town) is the tiny settlement of Gilliat which contains one of the shire's fascinating curiosities. The unusual Eddington Arms Hotel is an old corrugated iron pub which is virtually unchanged since its construction in 1908. It is an authentic early 20th century western Queensland pub.

* Prior to the arrival of Europeans the area was home to the Wunumara Aboriginal people.

* Donald McIntyre arrived in the area in 1862. He travelled up the Darling River and established the property 'Dalgonally' about 70 km north of the present town.

* The creek was originally named Scorpion but, in 1870, it was changed to Julia Creek.

* Julia Creek began life as a Cobb & Co coach exchange point. At that point it had a pub and a dam.

* The railway reached the town in 1908 which meant that the town became the railhead for north-western Queensland. The first cattle yards were built that year.

* In 1924 the town acquired an open air picture theatre.

* In 1932 the Shire office for the district was established in the town.

* Reticulated electricity was installed in 1952.

* A convent school with boarding for students from outlying properties was opened in 1955.

* The town was connected to mains sewerage in the 1960s.

* The local hospital was converted to a medical centre in 2004.

There are two useful local websites. Check out http://www.atthecreek.com.au and http://www.mckinlay.qld.gov.au/julia-creek. 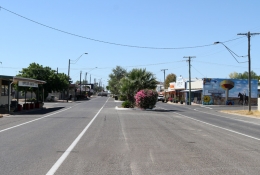 The main street of Julia Creek. 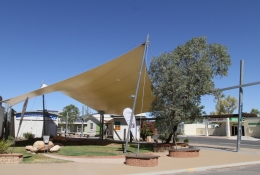 "At The Creek" Visitor Centre 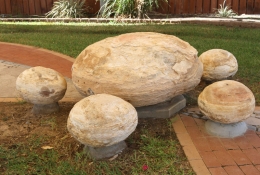 A picnic table and four chairs made out of moon rocks at the At the Creek Visitor Centre. 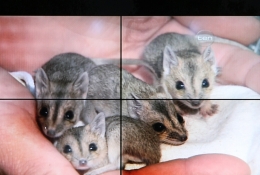 Baby dunnarts on the screen in the Dunnart Room - the closest you will get to seeing them if you are not there at feeding time. 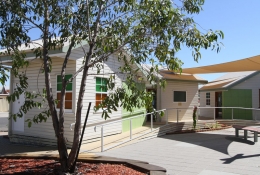 The fettlers cottages, containing exhibits, at the At the Creek information centre. 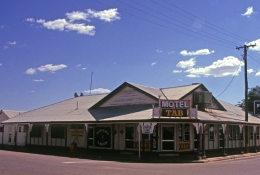 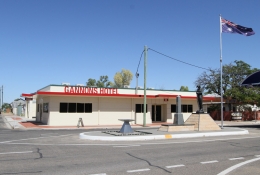 The modern Gannons Hotel which replaced the old building which burnt down in 2015. 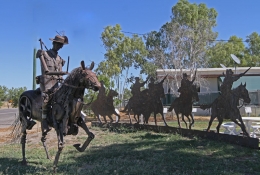 Spirit of the Light Horse Sculpture outside the RSL Club. 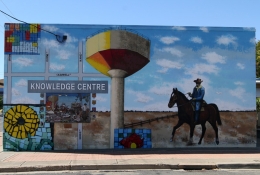 The mural on the corner of Burke Street and Quarrell Street. 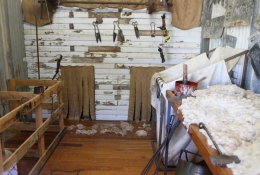 The shearing exhibit at the Duncan McIntyre Museum. 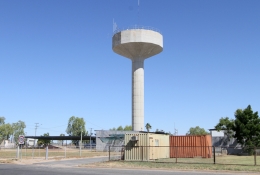 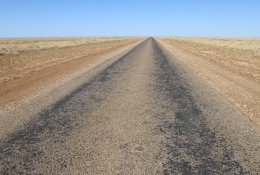 The road from Julia Creek to Winton