The appeal of the Yorke Peninsula lies in its quiet beaches, its excellent fishing and swimming, and the opportunities it offers to explore the rich history of copper mining at Moonta, Wallaroo and Kadina. In this sense Kadina, because it is the largest town on the peninsula and because it functions as the service centre for the region, is something of a Cinderella being left behind Marion Bay and Wallaroo (for example) which have much more appeal. Still Kadina is interesting for those who want to explore the copper mining history of the area and for those who want to visit the finest banking and currency museum in the country.

Kadina, part of the Copper Triangle, is located 150 km north-west of Adelaide and 44 m above sea level.

It is claimed that Kadina is taken from a Narangga First Nation word, either 'caddy-yeena' or 'caddy-inna' which probably meant "lizard plain".

Discovering Historic Kadina Town Walk and Drive
The best way to see Kadina's large number of historic buildings is to visit the Copper Coast Visitor Information Centre, pick up a Discovering Historic Kadina Town Walk brochure (for a nominal charge), head to the Kadina Town Hall (which is the starting point) and then mooch around the well signposted historical sites including the Kadina Railway Station (1878); the Victoria Square Rotunda, the Town Hall with its its impressive clock tower donated by Daniel Squibb, a local blacksmith; the Banking and Currency Museum (1874); the Church of Christ (1920); the stone residences in Lipson Avenue (c.1900); the Pioneer Cemetery (c.1860); the Wallaroo Mine (1860) and the former Police Residence (c.1900).

Perhaps the most interesting building in town is the Royal Exchange Hotel (1861) with its elegant cast iron balcony - at one time the longest balcony in South Australia - on the upstairs veranda and its National Trust listing. In 1875 it changed its name from the Exchange Hotel to the Royal Exchange Hotel after a stay by the Duke of Clarence, one of the many contenders for the mysterious identity of Jack the Ripper. It was also visited by a group of travelling cricketers led by the famous W. G. Grace in 1874.

For more details check out http://www.southaustralia.com/info.aspx?id=9009704.

There is also the Discovering Historic Kadina Town Drive which drives for 12 km around the local area and focuses on the importance of copper to the local economy.

Wallaroo Mine
Kadina's first mine was named Wallaroo after the property of its owner Walter Watson Hughes. Today the Wallaroo Mine is located 1.5 km south-west of the town centre (take the Moonta Road south and turn west into Matta Road) and is easily identified because of the large stone ruins of Harvey's Enginehouse (erected 1876). There was always a problem with groundwater at the Wallaroo Mine and the Enginehouse ran 24 hours a day pumping the water out so the copper could be extracted. Around it, and clearly signposted, are the remnants and ruins of the Wallaroo Mine. The mine has a fascinating history. In February, 1860 Walter Watson Hughes employed four miners who were working at the copper mine in Burra. By the middle of the year 150 miners were working at Wallaroo and by 1875 it was employing 1,000 men.

The Farm Shed Museum
Not only is it huge but it seems to keep growing. The Farm Shed Museum, as its name suggests, is a series of very substantial sheds which make up an excellent museum, now run by the National Trust, which successfully attempts to record the history of farming and mining on the Yorke Peninsula. Located 1.5 km south of the town centre the centrepiece is Matta House - a beautifully kept and maintained mine manager's house built in 1863 which has a shingle roof, a well kept cottage garden and is furnished with Victoriana. It is an excellent insight into the lifestyle of an important member (Edward Austin Horn, the manager of Matta Mine) of Kadina's mining community in the 19th century. There is an extensive collection of farming machinery, particularly dryland farming equipment; a 1950s schoolroom which has been carefully re-created; an excellent printing museum; an old style telephone exchange; a separate section devoted to the role of women in the local farming community; and a photographic collection recording the mining history of the town and the surrounding area. The complex at 50 Moonta Road is open from 9.00 am - 5.00 pm Monday to Friday and 10.00 am - 4.00 pm Saturday and Sunday. For further information contact either (08) 8821 2333 and check out http://farmshed.net.au

Miniature Railway
Located at the Farm Shed Museum is a miniature railway run by the well-named Copper Coast Old Engineering and Machinery Club. It runs on the first and third Sundays of each month. For more details check out http://farmshed.net.au/miniaturerailway/

Kadina Water Tower - The May Queen and the Steam Engine
Located in Francis Terrace, the Kadina Water Tower (a fine example of what has become known as Silo Art) depicts a "May Queen and a steam engine". The sign at the site explains that it was completed in 2018 by Melbourne-based artist, Resio and points out the significance of the image: "The May Queen reflects the Cornish heritage of our region and she is holding copper and wheat to symbolise our farming and mining heritage. The steam engine represents the railway line which ran alongside the water tower and was integral to connecting our towns."

* Prior to European settlement the area around Moonta was inhabited by the Narangga Aborigines whose lands spread across the entire Yorke Peninsula.

*The first European settlers arrived in the district in the 1830s. They took up land which they used mainly for grazing and the growing of wheat.

* Copper was discovered at Kadina by a shepherd named James Boor who was working for the grazier, Walter Watson Hughes. In 1866 R. P. Whitworth wrote: 'The country was never considered fit for anything until one of the oldest resident settlers, Captain Hughes, discovered that under the valueless surface, there were chances of great wealth in store for himself and others. He found traces of existing copper-bearing lodes on the beach near his station, and for years tried to follow those traces back into the country, but unsuccessfully until at length in the year 1860 a shepherd [James Boor], who was remarkably intelligent man, discovered copper ore thrown to the surface by the wombats in their burrowing under the limestone crust.'

* The response to the discovery of copper was immediate. Kadina was laid out in 1861.

* Within twelve months the Wombat Hotel (named in honour of the animals who had discovered the copper) opened.

* By 1875 there were 20,000 people in the district and most of them were miners who had emigrated with their families from Cornwall.

* A railway line from Kadina to the port at Wallaroo opened in 1878.

* In 1889 the copper mining companies amalgamated to become the Wallaroo and Moonta Mining and Smelting Company, the largest industrial company in South Australia.

* Copper mining was central to the success of Kadina's economy until the mines closed down in 1923.

* By 1938 mining in the area  completely stopped. It is estimated that since 1861 some 3.5 million tonnes of copper had been extracted.

* Today Kadina is the largest town on the Yorke Peninsula. It is essentially a service centre for the surrounding area which is known for its exceptionally good quality wheat and barley.

There is good general information at http://www.southaustralia.com/regions/yorke-peninsula.aspx 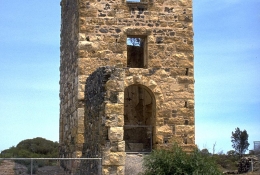 Harvey's Engine House erected 1876 to remove water from the Wallaroo Mine. 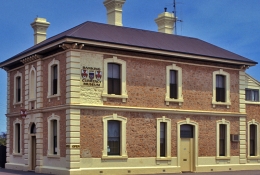 The Banking and Currency Museum (now closed) was located in the old Bank of South Australia (1874) building. 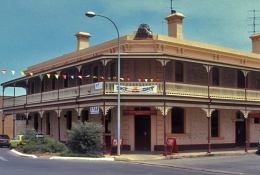 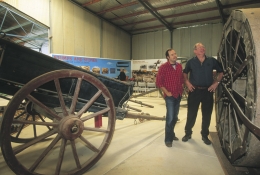 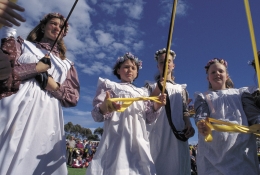