Historic town in the Darling Ranges east of Perth.

One of the great attractions of Perth is its proximity to bushland. Only a few kilometres from the city you can be walking in a National Park far removed from the bustle of the metropolis. Twenty five years ago the Kalamunda & District Tourist Association produced a brochure with the proud claim that: 'There are few places left in this world where one can, within 45 minutes of a capital city, enjoy native bushland, magnificent escarpment views, drive through beautiful working stone fruit and apple orchards, meander along scenic bush trails, or wander around an historical village. Kalamunda is such a place.'

Kalamunda is located 27 km east of Perth's CBD. It is in the Darling Ranges.

It is believed that cala munnda, in the Wajuk language of the local Beelu people meant 'a home in the forest'. Cala meant 'home' and munnda meant 'forest'.

Kalamunda History Village
Located at 56 Railway Road the Kalamunda History Village is the largest folk museum in Western Australia. Its aim is to depict the history of life in the hills and the industries of the district. The display includes two railway stations (the original operated from 1903-1927, the second from 1927-1949) and a Locomotive G118 steam engine. The buildings in the complex include the district's first state school, the original Post Office (1901) and the first official post office (1921), a replica sawpit, two settlers cottages, a World War II-era boarding house and a blacksmith's display. It is open Monday, Tuesday, Wednesday, Friday and Saturday from 10.00 am - 3.00 pm, closed on Thursday and open on Sunday from 11.00 am - 4.00 pm. tel: (08) 9293 1371 or check out http://www.kalamundahistoricalsociety.com/

Stirk Cottage
The Stirk Cottage still stands in Stirk Park on Kalamunda Road just north-west of the town centre. It is a simple, vernacular three room house which was originally built by Frederick and Elizabeth Stirk in 1881. The cottage is made of wattle and daub using materials found on the property - jarrah saplings for corner posts and mud carted and mixed by Elizabeth. The original roof was made from jarrah shingles. These shingles have been replaced with corrugated iron. Its historic importance is that it was the first house in what was to become Kalamunda.

Stained Glass Window and Public Art
The Kalamunda Library houses the largest stained glass window in the Southern Hemisphere. This mammoth task was undertaken by the Kalamunda Stained Glassgroup in 1987-1988, and features the green-grey foliage and the dramatic hills landscape, which are distinctive features of the region. The window is best viewed at night when it is lit from within. There is also the distinctive Gum-nut fountains, created by Joan Walsh-Smith and Charles Smith of Smith Sculptors.

Bibbulmun Track
The corner of Railway Road and Mundaring Weir Road at Kalamunda is the Northern Terminus starting point for the Bibbulmun Track. A short walk from the main street it is the beginning of a track which heads into Kalamunda National Park and then goes for more than 1,000 km south to Albany.

The Track enters Kalamunda National Park and passes through slopes of jarrah, marri, wandoo and the unusual butter gum. The walk is particularly impressive in spring when the wildflowers are blooming.

Schipp Road Walk
This is a relatively short loop walk of 3.8 km starting at Schipp Road, Kalamunda and including some sections of the Bibbulmun Track. It includes a number of steep climbs and descents. There is a downloadable PDF with a contour map available at http://www.perthtourism.com.au/trail/61/261/schipp-road-walk-trail.html?page=12

Kalamunda National Park
Kalamunda National Park is a 375 ha national park to the east of Kalamunda which has a number of excellent walking trails. It is noted for the diversity of its flora with woodlands of "jarrah, marri, wandoo and butter gum. Butter gum is an uncommon species with a powdery bark; because of its white bark it is sometimes called Darling Range ghost gum. The heath plants of the understorey flower profusely in late winter and spring. The park is home to some extremely rare plant species which exist nowhere else." Check out http://www.perthhills.com.au/discover.html, tel: (08) 9290 6100

Beelu National Park
Beelu National Park cover 3,000 ha of forest west of Kalamunda. There are a number of walking trails which offer opportunities for bird watching and views over Mundaring Weir and Lake CY O'Connor. It incorporates Fred Jacoby Park which is noted for its huge 140-year-old English oak trees. For more information check out http://parks.dpaw.wa.gov.au/park/beelu or tel: (08) 9295 2244.

Mason and Bird Heritage Trail
Head south from Kalamunda for 7 km on Canning Road until you reach Hardinge Road. There is a 3 km walking trail, detailed in the Mason and Bird Heritage Trail brochure which presents a walking trail from Bickley Reservoir which retraces 3 km of the original Mason and Bird timber railway. The origins of this track are interesting. In 1870 Benjamin Mason formed a partnership with Francis Bird and by 1872 they had built a horse drawn wooden tramway and timber from their timber station was being transported to the Canning River for shipment to the port of Fremantle.

* In 1839 Benjamin Robins took up land in the Kalamunda area.

* In 1864 Benjamin Mason became the first European to settle in the district. He was granted a timber cutter's licence to fell most jarrah near Kalamunda. By 1866 Mason had constructed his own timber station and 100 men and their families were living in the area.

* In 1870 Mason formed a partnership with Francis Bird. By 1872 they had built a horse-drawn wooden tramway and timber from their operation was being transported to the Canning River for shipment to the port of Fremantle.

* Bird left the partnership in 1877 but a combination of transportation problems and competition had driven Mason out of business by 1882. The mill, the railway, a manager's dwelling, 25 workmen's cottages and a 12 stall stable  were put up for auction in October that year but there was not a single bid.

* In 1881 Frederick and Elizabeth Stirk took up 10 acres (4 ha) of land and built themselves a wattle and daub cottage. The Stirk Cottage still stands on Kalamunda Road.

* In 1891 the Canning Jarrah Timber Co took up a 100,000 acre timber lease and built a zig zag railway between their mill and the main railway line at Midland. So steep was the climb that the engine had to alternate between pulling the load and pushing it.

* In 1901 the townsite of Calla Munda, changed to Kalamunda, was proclaimed.

* The government took over the railway line in 1903 and ran it until 1949. Today the old zig zag railway has been turned into a scenic drive which offers superb views over Perth.

* In the 1920s Kalamunda became a popular health resort.

* In 1927 the Kalamunda Hotel (the second in the area) was built from winnings in the Melbourne Cup - a Western Australian horse, Blue Spec, had won that year.

* Today Kalamunda is within commuting distance of the city centre. 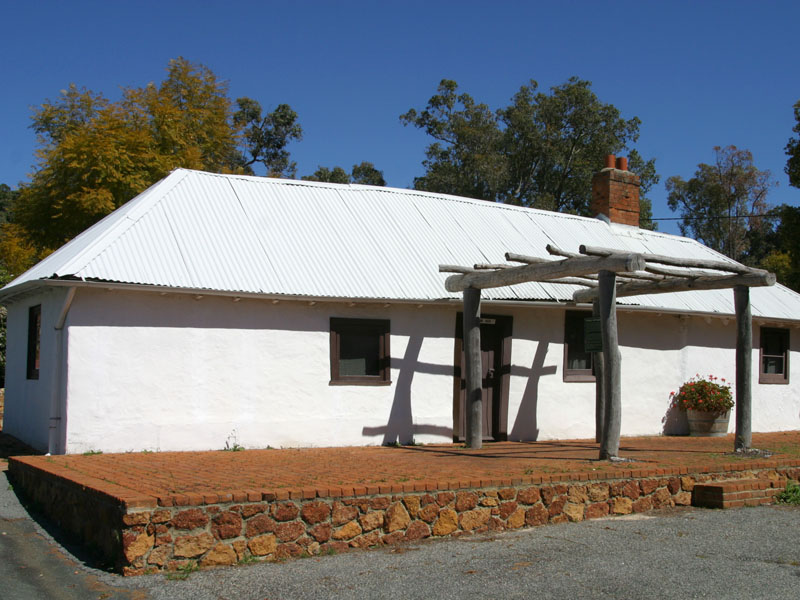 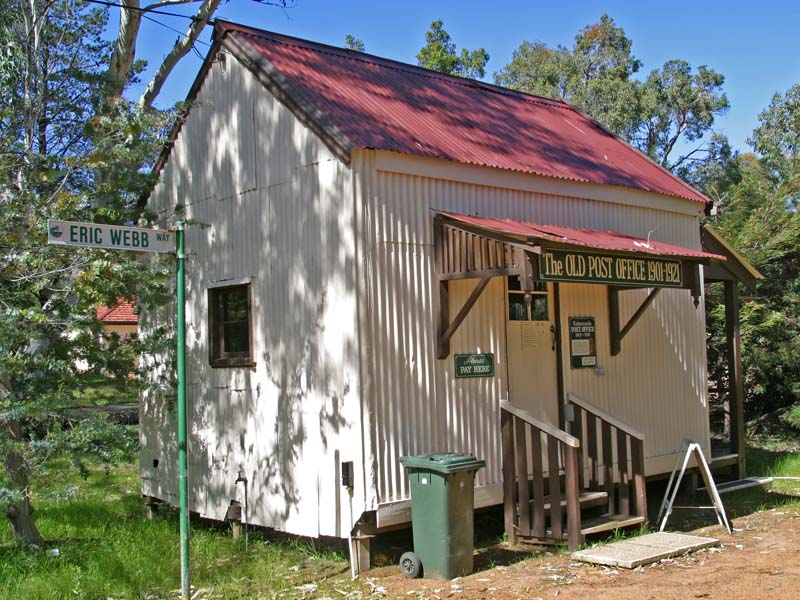 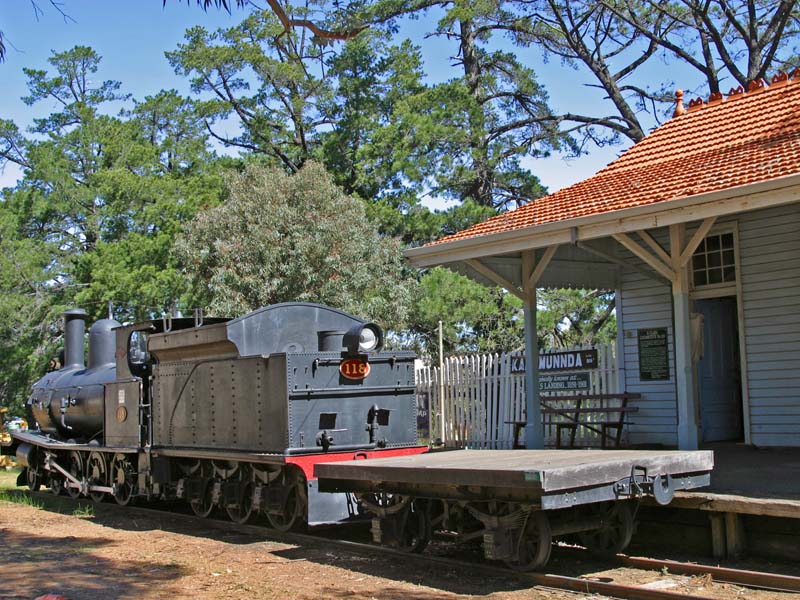 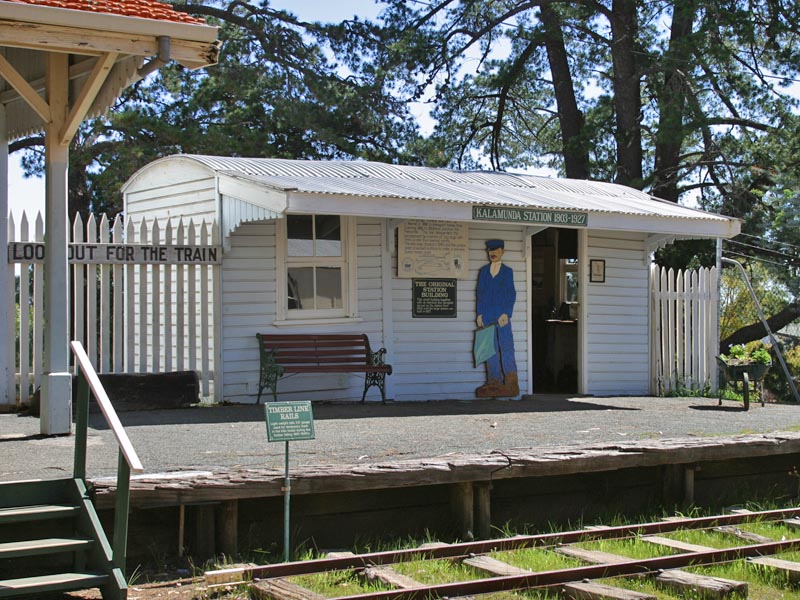 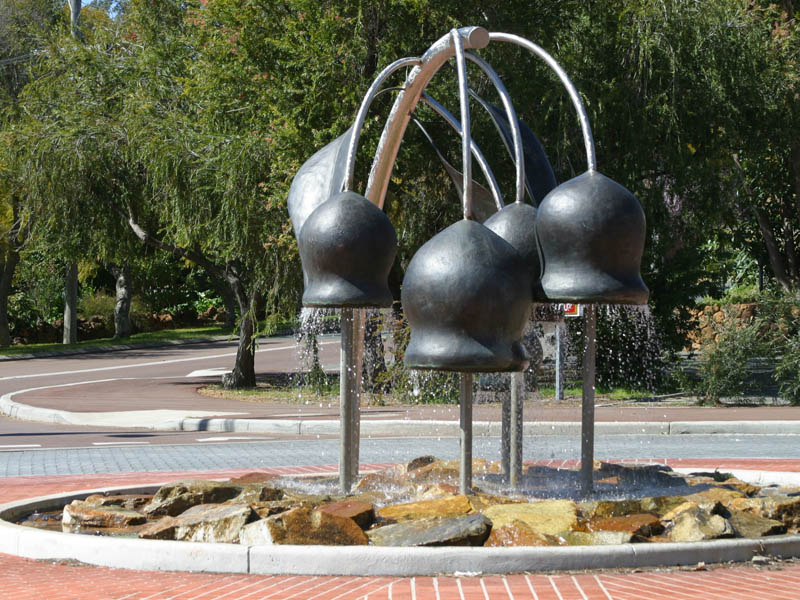