Charming town in the Dandenong Ranges surrounded by gardens and lookouts

Kalorama is a small village on the Mount Dandenong Tourist Road in the Dandenong Ranges. The combination of high rainfall and rich volcanic soils has produced ranges cloaked in vast tracts of forests and fern gullies. visitors, particularly day trippers, are drawn to the mountains because they are cool and fresh and offer opportunities for bushwalking and bird watching close to the city yet far removed from the hustle and bustle of suburbia.

Kalorama is located 47 km east of Melbourne via the M3 and the Mt Dandenong Tourist Road.

Although it sounds Aboriginal, Kalorama is actually taken from the Greek word "kalos" meaning "beautiful view". It was coined by a Reverend Henschelwood and adopted for the settlement in 1932.

Kalorama Park
Kalorama Park is a 22 ha reserve on the south-eastern slopes of the Dandenong Ranges. It has beautiful views over Sylvan Reservoir. The land was purchased from the Jeeves family - Isaac Jeeves was one of the first European settlers in the district. Parks Victoria note that it is "perfect for picnics, barbecues or simply relaxing whilst enjoying the magnificent surrounds. Enjoy a relaxing picnic in the area below the lower carpark which is surrounded by garden beds with elm trees, silver birch, pine trees and pin oaks, along with Australian native plants and ferns ... An expansive grassy area near the upper carpark is an ideal setting to spread out the picnic blanket and enjoy lunch. The views over the south-eastern face of the Ranges are spectacular from the upper carpark. A number of large eucalypt trees and tree ferns in the area offer ample shade to escape the summer heat." Check out https://parkweb.vic.gov.au/explore/parks/dandenong-ranges-national-park/things-to-do/kalorama-park for more details.

Kalorama Lookout
Located near the Kalorama General Store is one of the most famous lookouts in the Dandenong Ranges. Known as "Five Ways" it looks across Kalorama Park, Silvan Reservoir, and towards the National Botanic Gardens and the R.J. Hamer Arboretum.

Karwarra Australian Plant Garden
Located at 1190-1196 Mt Dandenong Tourist Road, the Karwarra Australian Plant Garden is a two-hectare landscaped botanic garden which specialises in Australian native wildflowers and other plants. The garden, established in 1965 and now owned and operatd by the Yarra Ranges Coouncil, has a diversity of birdlife, easy walking tracks, toilets, a nursery and a continuous floral display situated beneath stands of mountain grey gums and messmate. Some of the plants featured include banksia, boronia, correa, crowea, epacris, eucalyptus, grevillea, hakea, hibbertia, persoonia, pomaderris, prostanthera, telopea, thomasia, waratah, rainforest and fern species, indigenous flora, rare species, shade-tolerant plants and a special area for unusual Tasmanian plants. It is open weekends from 1.00 pm to 4.00 pm and Tuesday to Friday from 10.00 am to 4.00 pm, tel: (03) 9728 4256 or check out https://www.yarraranges.vic.gov.au/Lists/Parks-Facilities/Karwarra-Australian-Plant-Garden.

William Ricketts Sanctuary
Located north of Mount Dandenong on Mount Dandenong Tourist Road is the William Ricketts Sanctuary which features a series of kiln-fired clay sculptures (made of clay and fired at 1200°C) created by William Ricketts who bought the land in 1934. From 1949 to 1960 he made numerous trips to Central Australia to live with the Pitjantjatjara and Arrernte Aboriginal people whose culture and traditions inspired his sculpture. From 1970 to 1972 he lived in India where he experienced a spiritual affinity with the Indian people. While there he spent some time at an ashram in Pondicherry. Ricketts continued to live and work on his four-acre plot until his death, at the age of 94 years, in 1993.
Ricketts' works were inspired by the attitude of the Aboriginal people towards the land. The clay sculptures of Aboriginal people articulate his view that all humans should follow the example of Aborigines and act as custodians of the natural environment. There is a circular walk around the gardens which have moss and lichen-covered rocks, waterfalls, tall mountain ash, ferns and shady paths. They are positioned so they appear to be a part of the natural environment. The ambience is that of a peaceful sanctuary and this is reinforced by titles like "Tree of Life", "Life Harmonious" and "Everlasting Home". There are toilets, a visitor centre, a gallery, a kiln display and a log cabin visual display. Car parking is available opposite the sanctuary. The sanctuary is open from 10.00 am to 4.30 pm daily. There is an excellent downloadable map and brochure available at http://parkweb.vic.gov.au/__data/assets/pdf_file/0019/315820/Park-note-William-Ricketts-Sanctuary.pdf.

Mount Dandenong Arboretum
Located at 65 Ridge Road, Mount Dandenong, the Mount Dandenong Arboretum is 16 hectares which were "set aside in 1928 to establish an arboretum of national significance featuring conifers and deciduous trees ... The collection includes spectacular trees from around the world including eight that are listed in the National Trust’s significant tree register ... it was agreed in 1999 to gradually focus the collection on southern hemisphere conifers that would create a unique visitor experience with greater botanical significance." For more information check out https://parkweb.vic.gov.au/explore/parks/dandenong-ranges-national-park/things-to-do/mt-dandenong-arboretum.

Dandenong Ranges National Park
Dandenong Ranges National Park (3,540 ha) was declared in 1987 when the Ferntree Gully National Park, Sherbrooke Forest and Doongalla Estate were amalgamated. A decade later the Olinda State Forest, Mount Evelyn and Montrose Reserve were added. The park, which stretches from Kalorama in the north to Belgrave in the south is primarily a place for walking, sightseeing, picnicking, nature observation and car touring. More than 350 plant species have been recorded in the park, including the rare cinnamon wattle and smooth tea-tree, 130 bird species, 31 species of mammals (most are nocturnal), 21 reptile species and nine amphibians.

Each has its own attractions and they can best be explored by:
(a) check out https://parkweb.vic.gov.au/explore/parks/dandenong-ranges-national-park and downloading the specific Visitor Guides for each section.
(b) checking out Aussie Towns specific entries on Belgrave, Dandenong, Emerald, Upper Ferntree Gully, Kallista, Kalorama, Monbulk, Olinda, Pakenham and Sherbrooke.

The Olinda and Doongalla Area
The northern section of the National Park, known as Olinda and Doongalla, extends from the town of Olinda north to the town of Kalorama and east towards Silvan Reservoir Park. It is characterised by relatively undisturbed habitat. The gang-gang cockatoo, superb parrot, lyrebird and wedge-tailed eagle, possums, bats and gliders (all nocturnal), swamp wallabies and the rare broad-toothed rat are all found in this section of the park which consists primarily of dry forest of messmate and narrow-leaved peppermint eucalyptus, although there are wetter gullies where tree ferns, manna gum, mountain grey gum and swamp gum can be found.

Walking around the Doongalla and Olinda Sections
This is an ideal area for bushwalking. The best walks start from the picnic areas and range from from a 1.2 km walk to a 6.5 km walk. They range from easy to challenging. Parks Victoria recommend five walks of differing difficulty.

* Valley Walk – 6.5 km, 3.5 hrs circuit - this is a steep and rocky walk for experienced walkers which starts with the Eagle Nest Walk (ie from the Eagle Nest Picnic Ground) and continues via Barges Road to Predator Track and back to Valley Picnic Ground.

* Doongalla Stables Track Loop – 1.9 km, 45 minutes circuit - this walk starts from the Doongalla Stables parking area and follows the Stables Track, has a short steep climb uphill until it joins Camelia Track and then joins the Doongalla Forest Road and heads back to the car park and picnic area. The gullies along Dandenong Creek support mountain ash while the drier more exposed slopes are characterised by long-leaved box and red stringybark communities. Birdlife in this section of the park includes pardalote, mistletoe birds, ravens, yellow-tailed black cockatoos, thornbills, eastern yellow robins, New Holland honeyeaters, whipbirds, golden whistlers, boobook and powerful owls. Goannas, grass skinks  and echidnas can be seen in the daytime although most of the park's mammals are nocturnal.

* Channel 10 Track/ Camelia Loop – 3.6 km, 1.5 hour circuit This long walk starts at the Channel 10 Track at the Doongalla Homestead car park and provides panoramic views of Melbourne to Port Philip Bay and the You Yangs, detour via Zig Zag Track to Burkes Lookout, and, if you are keen for a longer walk, to Mount Dandenong Observatory and the Sky High Restaurant

Mt Dandenong Observatory and Sky High Restaurant
The Mount Dandenong Observatory is 621 m above sea-level (the highest point in the Dandenongs) it offers spectacular views of Melbourne, Port Phillip Bay, the You Yangs and Mt Macedon.
SkyHigh, basically a wedding venue and restaurant, is located near the Observatory and enjoys impressive views across Melbourne. It offers breakfast, lunch and dinner in the restaurant we well as landscaped gardens with views over the city, a maze and a short bushwalk. Check out https://www.skyhighmtdandenong.com.au for more details.

Silvan Reservoir Park
The Silvan Reservoir Park is a recreation area in the foothills of the Dandenong Ranges. There are 20 ha of lawns and landscaped picnic areas which consist mainly of exotic vegetation (including cypress, spruce, liquidamber, poplar, and maples), surrounded by eucalypt forest. The European-style formal gardens, which were developed in the 1930s, feature azaleas and rhododendrons and have stone terraces and a vine-covered pergola. The Park has children's play facilities, barbecues (with free wood), some fine views and numerous walking tracks.
This site was chosen for a reservoir after a severe drought in 1914. Construction commenced in 1926 and the dam was officially opened in 1931. The dam wall is 644 metres long, 219 metres wide at its base and 43 metres high. It stores water for Melbourne and surrounding areas. The area is rich in native fauna and it is possible to see the short-beaked echidna, brush-tail and ring-tail possums, sugar gliders and the common wombat. Birdlife includes herons, spoonbills, ducks, rosellas, kookaburras, wedge-tailed eagles, thornbills, tree creepers, robins, owls and cockatoos.

* Prior to European settlement the area was home to the Woiwurrung Aboriginal people. The Wurrundjeri people passed through the area en route to the Yarra Valley where they spent their summers on the banks of the Yarra River.

* The forests drew timber getters in the early days of European settlement who supplied a growing market in Melbourne.

* The first European in the Dandenongs was botanist Daniel Bunce in 1839. Guided by a party of Aboriginal people he climbed Mount Corhanwarrabul (628 m) and Mount Dandenong (633 m) - the two highest peaks in the ranges.

* Botanist, Ferdinand von Mueller, who was responsible for the Melbourne Botanic Gardens, explored the area in the 1850s.

* The first settlers were Isaac Jeeves, Mathew Child and Jabez Richardson who took up land in the area around 1855.

* By the 1880s the area was a popular holiday destination for nature lovers and bushwalkers.

* In 1882 the first land reserved for recreational purposes in the area was at Ferntree Gully.

* In 1987 the Dandenong Ranges National Park was declared.

There is an official site. Check out https://visitdandenongranges.com.au/kalorama. 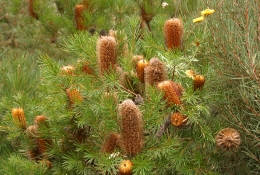 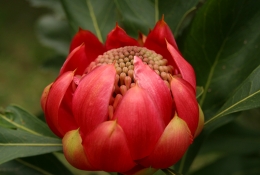 A special native flower in the Karwarra Australian Plant Garden 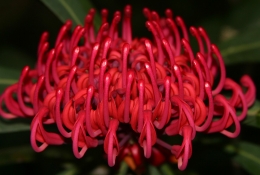 A floral wonder in the Karwarra Australian Plant Garden 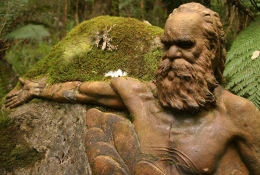 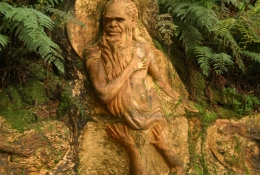