Historic cheese town in the verdant valley between Candelo and Bega

There was a time when Kameruka was a thriving community driven by the fame of Kameruka cheese (now produced in Bega) and the elegance of both the Kameruka Homestead and the solitary grace of the Holy Trinity Church. Today it is a tiny village on Candelo Creek between Candelo and Bega.

Kameruka is located 443 km south of Sydney via the Princes Highway; 497 km via the Hume Highway, Canberra and Cooma; and 21 km south-west of Bega.

It is claimed that "kameruka" is a Yuin word for "wait until I return".

Kameruka Homestead
Kameruka Homestead was built in 1845 by the Walker Brothers who had taken over the 200,000 acre property from the Imlay Brothers who had fallen on difficult times. By 1857 it was owned by the Tooth family (of beer fame) who continued to own and operate the farm until they sold it in 2007. It had remained in the family for 150 years and during that time it could claim that it was the oldest dairy stud in Australia.

Its early history is a bizarre mixture of Australian ingenuity and a desire to maintain English traditions in the Australian countryside. The Walker Brothers were known to keep a pack of hounds and, instead of foxes, to set the hounds free onto the local dingo population. The Walkers sold the property to the Twofold Bay Pastoral Association. Two members of the Association were members of the Tooth brewing family.

In 1854 James Manning was appointed as manager of the property and he introduced cheese making which saw the property prosper. He also encouraged the migration of German settlers who quickly involved themselves in the production of cheese.

By 1864 the property had been greatly reduced in size but the arrival of Robert Lucas-Tooth saw the property developed as a large rural estate. The Kameruka Homestead website explains: "Robert Tooth took on an enormous building programme, most of which can still be seen today: Holy Trinity Church, three Cheese factories, the Clock Tower, Village Store and Butcher’s shop, Village Hall, dairies and some thirty houses for the employees as well as schools for the children, golf course and cricket oval for the enjoyment of staff. With the planting of English and European trees the surrounding land around the 'village' was also designed in an English parkland style which included a truly tranquil oriental lake." Effectively Robert Tooth created the village of Kameruka.

When it was sold in 2007 the owner, Frank Foster a relative of the Tooth family, could proudly write: "Kameruka is without doubt one of the best known rural names on the eastern seaboard and the property itself a major historical landmark of Australia. The ground breaking plans and vision of the early settlers of Kameruka are preserved for all to see. This is a significant part of Australia's living heritage. The estate's private village scene is complete with cricket oval, village hall, clock tower and resident's cottages, all preserved and maintained in near original condition. The front gate entrance leads you past the classic gatehouse, down the oak lined avenue to the 1845 homestead and gardens. The famous clock tower has stood nearby chiming every quarter hour since 1911. Here is truly unsurpassed beauty. Even the village main street's commercial buildings survive; carpenter and blacksmith shops, village store, butcher's shop and the estate office all bear testament to the grand plan of one man, brewery magnate Robert Tooth. The surrounding landscaped farmland is home to the oldest and one of Australia's finest dairy studs. The very best genetics from 1880 to the present day ensure the Kameruka Jersey herd's ongoing excellent production as well as the stud achieving Royal Sydney Show Supreme Champion Dairy Cow, of all breeds, in 1981, 1983 and 1992. No other stud has ever or probably will ever achieve this record ... Kameruka Estate today stands testament to the tenacity and success of 150 years of unbroken ownership by the Tooth family and it is with great regret that the property is being offered for sale for the first time since 1857. The fact remains, however, that Kameruka will continue and will amply reward a new owner with its agricultural diversity, its intrinsic historic soul, ideal unspoilt position and the estate's stunning natural beauty. Unique is a loosely used word today but it probably is the one word that truly captures this very special place." At the time of its sale it covered 3,337 acres.

Holy Trinity Church
The Tooth family have been described as Edmund Blacket's "great Sydney patrons". It was therefore quite natural that they would employ him to design a church for the Kameruka estate. Holy Trinity Church was consecrated in 1869. It is an impressive church which was effectively a private church for the Tooth family. The church's most impressive feature is its high-pitched roof. It contains memorials to the Tooth family and members of the family are buried in the cemetery which can be found behind the building. The high clock tower and gatehouse were erected in 1911.  There is a war memorial to the local people who died in the World Wars near the church.

* Prior to the arrival of Europeans the rich Candelo Valley had been home to members of the Yuin Aboriginal language group for over 20,000 years.

* The first settlers in the Kameruka district were the Imlay Brothers who arrived in 1834 and occupied a 200,000 acre cattle run.

* By the 1840s the Imlays were experiencing major financial problems and they handed their land over to Sydney merchants, the Walker Brothers, in 1844.

* In 1845 the Walkers built the four-roomed Georgian mansion known as Kameruka Homestead and engaged in dingo hunting with a pack of hounds and an Aborigine named Tom Doolin who became the master of the hounds.

* The Kameruka Estate was sold by the Walkers in 1852 to the Twofold Bay Pastoral Association - a joint venture of the Manning brothers, the Tooth brothers (members of the renowned Tooth Brewery family) and Thomas Sutcliffe Mort.

* From 1852-1860 the estate was run by James Manning who acted as the resident manager. Manning encouraged German immigrants to settle in the district. They were instrumental in the early production of Kameruka cheese.

* James Manning bought Kameruka in 1861 but floods, disease and the Land Act broke up the holdings. He lost 7,000 cattle to pneumonia.

* Manning sold Kameruka in 1862 to Frederick Tooth who, in turn, sold it to his nephew Robert Tooth in 1864.

* It was Robert who began to develop a largely self-contained community based on the English agricultural estate system.

* In 1888 a touring English XI played a 22-strong local side on the estate's cricket oval. The English won.

* By the 21st century the Kameruka Estate was owned by Tooth's granddaughter and great grandson who ran it with the help of share farmers.

* In 2007 the 1,300 ha Kameruka Estate was sold to English shipping magnate, Giles Pritchard-Gordon.

* In 2014, after the death of Pritchard-Gordon, his widow put the property up for sale. 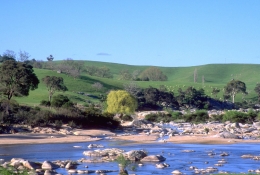 View across the Candelo Creek with rolling green hills and sheep. 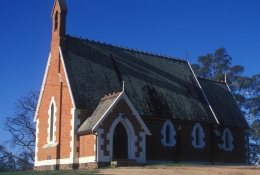