Town famous for its cement production - known as The Town That Built Sydney.

Kandos is a town which was created in 1913 to exploit the limestone in the area. It became a huge producer of cement which gave it the nickname "The Town That Built Sydney". Since the cement works closed in 2011 it has become a popular "tree change" destination for artists and, as such, has a number of galleries and interesting art and craft shops.

Kandos is located 234 km north-west of Sydney via Richmond and the Castlereagh Highway. It is 93 km north of Lithgow, 64 km south-east of Mudgee and 762 m above sea-level.

The town came into existence about 1913 when a cement works was established. One interpretation says that the original name - Candos - was an acronym based upon the names of the six directors of the first company. Another claims that it was named after a local MP named Willliam Chandos Wall. The first railway stop in the area was Candos which changed to Kandos on 7 March, 1915.

Kandos Museum
The Kandos Museum is located in the old Kandos Methodist Church at 22 Buchanan Street. The church was built in 1919 and is the first Spanish Mission style church in Australia. It is "a modern concrete building with a flat roof and a rectangular floor plan. The cement works donated the concrete for the building. Its modernist style was derived from the Methodist church in the American home town of the manager of the cement works, Floyd S. Richards." Its many exhibits provide an insight into the region's industry and social history. Thematically it includes Industrial Kandos, Kandos Modernism, Kandos Indigenous Communities, Kandos War Service and Kandos Social History. From the museum there is a good view of the massive aerial ropeway which the cement company uses to convey limestone from its quarries. The museum is open Wednesday to Sunday from 10.00 am to 4.00 pm. To arrange openings at other times ring (02) 6379 4600. For more information check out http://www.kandosmuseum.org.au.

Rotary Lookout
The town's Rotary Lookout can be accessed by driving from Kandos on the Sydney Road (It’s located on Bylong Valley Way on the right hand side as you’re heading out of town towards Ilford) and as you pass the gantry that once carried buckets of limestone to the cement works (it is over 2 km from Kandos), there is a right hand turn (unsealed) that takes you to the Lookout just above the road. This offers an elevated view back into the valley and of Kandos at the foot of Coomber Melon Mountain.

Windamere Dam
Windamere Dam, on the Cudgegong River, is located about 32 km north-west of Kandos and 13 km beyond Cudgegong Waters Park. It was completed in 1984 "to meet irrigation, stock and domestic needs in the Cudgegong Valley". The main attractions of the dam and lake are camping (with cabins and caravan sites), water sports (skiing, sailing, canoeing, swimming) and fishing (the lake is stocked with golden perch, Murray cod, silver perch and catfish). The lake covers 20 square kilometres with a total capacity of 368.12 gigalitres. The wall of the dam is 825 m long and 67 m high. For more information check out http://www.waternsw.com.au/supply/visit/windamere-dam.
Cudgegong Waters Park, located just off the Mudgee Road at the southern end of the dam, has the only boat ramp onto Windamere Dam as well as cabins, campsites, barbecue areas, on-site caravans and a kiosk selling bait, lures, ice, groceries and petrol. For more information check out http://www.cudgegongwatersparkwindameredam.com.

Dunns Swamp
Located 30 km west of Kandos on the Dabee Road, Dunns Swamp Ganguddy was originally built to provide water for the Kandos Cement Works. Located on the banks of the Cudgegong River and nestled amongst stunning sandstone pagoda rock formations, Dunns Swamp Ganguddy is home to over 107 bird species and with a number of walking tracks it offers an excellent opportunity to study the biodiversity of the region. It also offers canoeing and swimming. Check out https://www.nationalparks.nsw.gov.au/camping-and-accommodation/campgrounds/dunns-swamp-ganguddy-campground for more details.

Glen Davis
Located 48 km south of Kandos via Glen Alice Road, Glen Davis is an old shale-mining ghost town on the Capertee River. The first mining tunnel, established in 1881, later became the basis of the major mining enterprise which opened in 1938. The Post Office was opened the following year. A town of some 2500 people developed around the mine, which was named Glen Davis after the Davis Gelatine interests who headed the mining consortium. The operation closed down in 1952, due to high costs and the increasingly small output, leaving what remains today - a fascinating ghost town characterised by crumbling furnace ruins, retorts and collapsed shafts covered in vegetation and surrounded by steep sandstone cliffs and a profuse array of birdlife. Glen Davis has a picnic area with an amenities block.
There is a bushwalking trail (22 km return) to Newnes up the Green Gully, in the Wollemi National Park, following the old pipeline track. There are lyrebirds, cycads, banksia serrata and assorted eucalyptus. Information on this walk is available from the museum.
The only realistic way to see the ruins of the old shale mining town is to go on one of the Glen Davis Shale Oil Works Tours. Alex Mateer, who runs the tours, explains: "We do a weekly tour every Saturday at 2.00 pm. We meet at the front gate of  “The Poplars”, Glen Davis. The tour costs $15 pp,  ($8 for children under 12 yrs) and takes approx 2 hours - it's a walking tour, where you can see the ruins and hear the stories, so dress for the weather and bring some water. We also sometimes do private tours by arrangement, but they are more expensive.  It's always good to prebook and that way I can get in touch if we have to cancel for any reason (very unusual, but it has happened). You can do this by email (rickstalex@gmail.com) or phone (02) 6379 7380."

* In 1884 the railway from Wallerawang was extended to Rylstone.

* The town came into existence as a private village in 1913 when the New South Wales Cement Lime and Coal Company was set up to take advantage of local supplies of limestone which was conveyed from the quarries by means of an enormous aerial ropeway.

* In 1915 the name of the town was changed from Candos to Kandos because Candos was seen as being too close to Chandos in South Australia.

* In 1915 the Kandos railway station was opened.

There is a useful local website. Check out http://rylstonekandos.com. 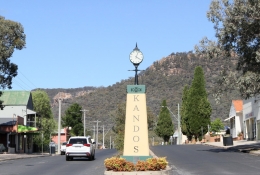 The clock in the main street of Kandos. 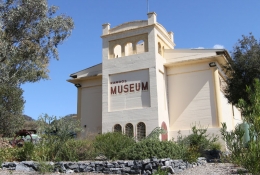 The Kandos Museum, once a Methodist Church (1919). 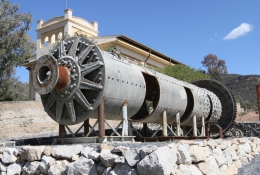 A section of Cement Mill No.3 outside the Kandos Museum. 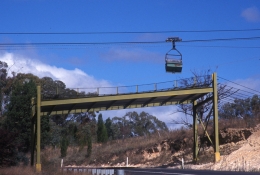 The aerial ropeway used to carry limestone to the cement works. It has been dismantled. 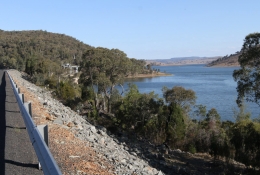 The dam wall of Lake Windamere 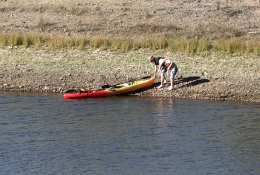 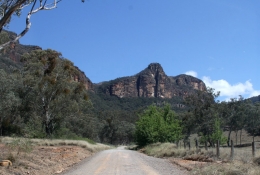 The rugged beauty and impressive sandstone cliffs at Glen Davis.