Beautiful valley which has become a desirable "tree change" destination

There are places in Kangaroo Valley where you can stand, turn 360°, and see the hills and the escarpment on every side. It is reputedly one of only seven enclosed valleys in the world. Don't ask me to name the other six but Capertee, near Lithgow, is another one. Let's just say that it is an extraordinarily beautiful valley, richly green when the rains have come; intimate because of the surrounding hills are characterised by neat farms; mysterious because of the rainforest in the gorges and on the slopes of the valley; and unashamedly gorgeous because of the small creeks which cross the valley and the old world charm of the chic village. These qualities led the National Trust to classify the entire town in 1977. In recent times the valley has been a magnet for people wanting a "tree change" with members of both INXS and Midnight Oil buying into the valley. Visitors who travel to the area tend to picnic beside the Kangaroo River, walk across the historic Hampden Suspension Bridge, hire canoes and explore the Kangaroo River and visit the craft shops, coffee lounges and tea rooms in the village. The area is also known for its excellent bushwalking.

Kangaroo Valley is located south of Sydney. It can be reached via the Hume Motorway and Bowral which is 156 km or via the Princes Highway and the road from Nowra which is 184 km.

The Reverend W.B. Clarke, famous for discovering gold and being told "Put it away, Mr. Clarke, or we shall all have our throats cut" by Governor Gipps, is said to have observed, in 1840, that the valley "takes its name from the kangaroos which formerly abounded here but are now extinct". Whether that is true is open to dispute. It is, however, self evident that someone once felt the valley was alive with kangaroos and named it accordingly.

Hampden Suspension Bridge
Designed by Ernest Macartney de Burgh, a prominent bridge architect and engineer, Hampden Suspension Bridge was completed in 1898. It was restored in 2011 with great care being taken to replicate the original bridge rather than just replace it with modern technology. The vital link for the community - it crosses the Kangaroo River on the road from Nowra to Moss Vale - Hampden Bridge is recognised as the oldest surviving suspension bridge in the country. The appeal of the bridge lies in its statement about the affluence of the area when it was built. It was no ordinary bridge but a piece of affluence with castellated towers which resemble the turrets of a medieval castle. The suspension cables were imported from England and it was named after the Governor of NSW, Lord Hampden. There is an interesting video, with historic footage of the bridge, at http://www.hampdenbridgeheritage.com.au.

Kangaroo River
The Hampden Suspension Bridge crosses the Kangaroo River - a popular place for picnics, swimming in summer, fishing and canoeing. There are good facilities on both sides of the river. Kangaroo Valley Safaris hire canoes and kayaks near the Hampden Suspension Bridge,  tel: (02) 4465 1502 or check out http://www.kangaroovalleycanoes.com.au. They offer five trips to various locations around the valley. The shortest trip, the Hampden Bridge to Bendeela excursion, lasts two hours. Some of the others can last up to five days.

George Walker Bridge and Pioneer Settlement Reserve
In 1931 George Walker, a group of dairy farmers and a blacksmith built an impressive 72 m suspension bridge over Broger's Creek. It was the work of  local men with no technical expertise and was constructed at their own expense. It was relocated at the northern end of the Hampden Bridge adjacent the Pioneer Museum Park in 1977 and officially opened by the Premier of New South Wales, Neville Wran. Today it is an integral part of the Pioneer Museum Park.

Pioneer Museum Park
The Pioneer Museum Park is based around a replica of an 1865 farmhouse. There is a dairy, a forge and horse-drawn vehicles. Adjacent is Hampden Cottage, a shop specialising in pottery and ferns which is housed in the 1880 residence of an early settler. Both buildings have been furnished by the local historical society after the fashion of the day. The park proudly declares that it is community run and non-profit. It also houses a replica of an illicit still, an old school bell, the George Walker Bridge, has a 300 million year old fossil rock and includes a number of interesting historic artefacts including milking bails and a windmill. See http://www.kangaroovalleymuseum.com for opening times and entry fees.

Historic Buildings
The best way to explore the village is to download the Kangaroo Valley Explorer: Historic Walk brochure (http://www.kvexplorer.com.au/KV_Explorer/Historic_Village_Walk_files/KV%20Explorer%20historic%20booklet%202011%20web.pdf) which lists over twenty places of particular interest in the valley. All the places are located on the main street (Moss Vale Road) and consequently the best way to explore the town's history is to start at the Nowra end and walk towards Hampden Suspension Bridge. The most significant include:

5. Court House
Listed by the National Trust this important building was designed by the NSW Government Architect, Walter Liberty Vernon, and completed in 1904. It is a fine example of a rock faced stone courthouse.

6. Heritage Dwellings
There is a row of three buildings which were built around the same time. The Old Bakery dates from 1890 and is a typical village bakery with the house behind and the shop in the front. Next door, and now the Kangaroo Valley Pottery Shop, is a shop built for Robert Davidson in 1906 which operated as a Cheap Store for twenty years and then became a barber's shop and billiard saloon. And there is a cottage, built in the 1880s, which is now the Fudge House.

8. Friendly Inn
Distinctive and dominating, the Friendly Inn was designed by Cyril Blackett and established in 1892. At the time it was named the Commercial Hotel. It was a substantial hotel with 17 rooms which was partly destroyed by fire in 1933.

11. Post Office
Built in the 1880s it has been used as a Court House, Council Chambers and haberdashery store over the years. It eventually became the local post office in 1912.

12. The Anglican Church of the Good Shepherd
The Anglican Church of the Good Shepherd was the first independent commission for the prominent architect, John Horbury Hunt. It was built by John Tanner in 1872 from brick and local sandstone. Originally it had a thatched roof but this was changed to shingles and eventually became tiles. Horbury Hunt designed several other buildings in the valley including the Barrengarry Public School (1880). The memorial gates to the church were built to celebrate the Diamond Jubilee of King George V in 1935.

16. The Church of the Good Shepherd Rectory
The rectory was designed by John Horbury Hunt and built by John Tanner in 1882. It was built of sandstone taken from the banks of the Kangaroo River near Hampden Bridge, as were the public school (1885), and the former courthouse (c.1910).

17. Hampden Suspension Bridge
Hampden Suspension Bridge was completed in 1898. It was subsequently restored in 2011 with great care being taken to replicate the original bridge rather than just replace it with modern technology. The vital link for the community - it crosses the Kangaroo River on the road from Nowra to Moss Vale - it is recognised as the oldest surviving suspension bridge in the country. The appeal of the bridge lies in its statement about the affluence of the area with its castellated towers which resemble the turrets of a medieval castle. The suspension cables were imported from England and it was named after the Governor of NSW, Lord Hampden. There is an interesting video, with historic footage of the bridge, at http://www.hampdenbridgeheritage.com.au.

Lookouts in the Area
1. Cambewarra Mountain
The road from Kangaroo Valley to Nowra crosses Cambewarra Mountain which has one of the best lookouts over the Shoalhaven and South Coast. The view includes Coolangatta Mountain to the north and, on a clear day, it reaches to Pigeon House Mountain near Ulladulla to the south. The lookout is open daily from 10.00 am until dusk. There is a coffee shop and the Cambewarra Range Nature Reserve offers excellent bushwalking. For more information check out http://www.nationalparks.nsw.gov.au/cambewarra-range-nature-reserve. The area is ideal for birdwatching.

2. Barrengarry
The journey from Kangaroo Valley to Fitzroy Falls Visitor Centre is 16 kilometres but, in order to get out of the valley, it is steep, spectacular and winding. This results in dramatic, and particularly beautiful, views across the valley.

* Prior to the arrival of Europeans the Wodi Wodi Aborigines lived and moved through Kangaroo Valley.

* In 1812 surveyor George William Evans, guided by an Aboriginal man named Bundle, explored from Jervis Bay to the Shoalhaven River. On the journey Evans and his party climbed Cambewarra Mountain.

* By 1817  Governor Lachlan Macquarie had provided Brooks with a 700 acre (283 ha) grant in Kangaroo Valley. Brooks built a hut and stockyards only a kilometre from where the Hampden Bridge now stands.

* In 1818 Dr Charles Throsby mapped a route into the valley. He was helped an Aborigine named Timelong.

* In 1823 Cornelius O'Brien took up land in the area. Other settlers moved into the western section of the valley.

* In 1828 Alexander Berry's men, who were working on his Coolangatta Estate near Berry, crossed Kangaroo Mountain and located vast quantities of cedar south of Broger's Creek at the north-eastern end of the valley.

* In 1831 the surveyor Robert Hoddle made the first land survey of Kangaroo Valley.

* A census of 1841 counted only two free men and five convicts living in Kangaroo Valley. This did not include timber cutters in the forests and the local Aboriginal population.

* In 1846 Irishman Charles McCaffrey and his family came to work for Henry Osborne. They produced sufficient butter to begin selling it outside the valley. Around this time there were still at least five camps of Wodi Wodi Aborigines in the valley.

* An improved access road into the valley was cut in the early 1860s.

* By 1860 the population of the valley was about 200 whites and significant numbers of Aborigines.

* The first public school and the post office were completed in 1871.

* In 1872 the Anglican Church of the Good Shepherd was consecrated.

* Roman Catholic and Wesleyan churches were built in 1873 and a Presbyterian church in 1874.

* Roads were improved in the late 1870s and this resulted in better access to the valley.

* In 1879 a timber truss bridge across the Kangaroo River was opened.

* In 1881 the first cream separator arrived in the valley. It was symbolic of the growth of the local dairy industry.

* Telephones reached the valley in 1884.

* The Hampden Suspension Bridge was opened on 2 February, 1898.

* In 1908 the School of Arts building was officially opened.

* Today Kangaroo Valley is a tourist destination with a small number of farmers and a large number of hobby farms and weekend residents who live and holiday on a few hectares having escaped city life.

There is a good local website with lots of information about Accommodation and Eating. Check out http://www.kangaroovalleytourist.asn.au for details. 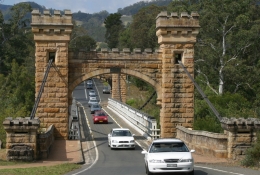 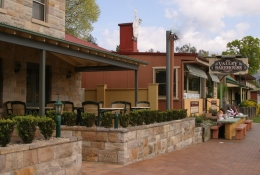 Chic shops now line the main street of the town. 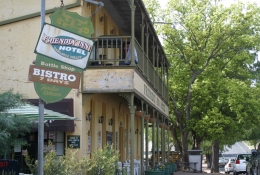 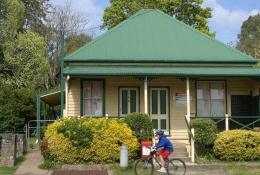 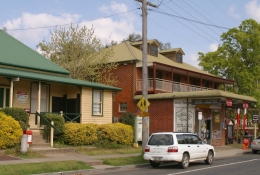 The Post Office and Newsagency in the main street. 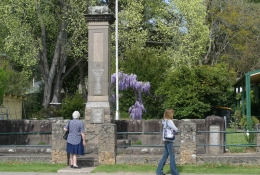 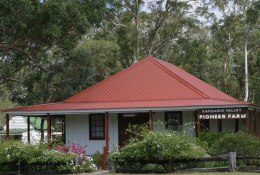 The historic cottage, dating from 1865, at the entrance to the Kangaroo Valley Pioneer Farm.