Rural service centre which describes itself as Victoria's Garden of Eden

Kaniva used to call itself as 'Victoria's Premier Smaller Town' and, because of its access to water, it now prefers 'Victoria's Garden of Eden'. It is a modest, thriving rural service town which began life servicing the surrounding wool and wheat properties. Today it is notable for a main street divided by a large central plantation and a sense its place between the Big and Little Deserts of the Mallee-Wimmera district.

Kaniva is located 18 km from the South Australian border. It is 419 km north-west of Melbourne on the Western Highway via Ballarat and Ararat and 80 km west of Dimboola.

There were a number of tiny villages in the area but when a post office was opened in April, 1882 it was named Kaniva. The origin of the word is uncertain. It may derive from Kinnivie south of Durham and west of Hartlepool in northern England or it may have been derived from a local Aboriginal word.

Sheep Art
Further east, in the Central Murray, they may have decided on sculptures of painted cows and cattle but it is entirely appropriate that local artist, Sharon Merrett, decided on painted sheep. There is a detailed account of the project and lots of images of the results at http://kaniva.info/sheep-art.html. It points out that: "The idea grew with a stencil day held in November 2010 where over 100 property stencils were bought in to record Kaniva's sheep history. Oral histories were also recorded and an extra piece of wall was painted to fit more stencils which would be brought in later on. A small 'Sheep Art' committee was formed and they applied for funding to various bodies for community groups to purchase and paint a flock of fibre glass sheep. Although these applications were unsuccessful, local businesses and community groups were willing to get behind the idea and donated money to enable the project to proceed. A special mould was made to create a smooth sheep that could be painted as a canvas, based on the Texcel breed by The Sheep Bloke. The appeal was put out for community groups to participate to paint the proposed 30 sheep. The response was overwhelming, overall 37 applications were received. Several workshops were held where local groups shared their stories artistically using the sheep as canvases. This was also the first community arts project for the town and for some people it was the first time they had painted anything."

Kaniva Museum
The Kaniva Local History Museum is located at 111 Commercial Street East. It is a local museum with household items and farming memorabilia from the local area. Outside is a horse trough which was donated by Annis and George Bills. The story (according to folklore) is that the Bills donated some 70,000 horse troughs around the country. The result is that they are all over Australia - there is one outside the Police Camp in Donald, for example. The museum is open by appointment only, tel: (03) 5392 2680.

Railway Station
Constructed in 1887 to a design by the Victorian Railways Department, it can be inspected off Progress Street which is one block north of the Kaniva Shire Hall. The Victorian Heritage Council has noted of this simple railway station that it is "architecturally significant as the most complete example of this standard station design, the 'Kaniva' style. This design was developed to cater for the heavily trafficked western line to Adelaide, and consequently included a large booking lobby and waiting room. Design features included decoration to the verandahs and to the gable ends. The survival of the projecting porch and decorated gable is unique. The design of the platform verandah is of special note, being of a picturesque style." For more information check out http://vhd.heritagecouncil.vic.gov.au/places/2388. It is currently closed and not open for inspection.

Lions Club Fauna & Wetlands Park
Located west of the roundabout on the Western Highway (on Commercial Street West) there is a small fauna reserve with picnic facilities, electric barbecues, toilets as well as Kangaroos, Wallabies, Emus, Deer, Guinea Fowl and Peacocks; an aviary with breeding pairs of Red-Tailed Black Cockatoos, King Parrots, Regent Parrots and Western Rosellas; and a Wetlands area which is home to waders and waterbirds as well as Honeyeaters, Lorikeets, Red-Rumped Parrots, Eastern Rosellas, Crested Pigeons, Galahs and Corellas. Check out https://kaniva.info/fauna-park.html for more details.

Billy Ho Bushwalk
Located 5 km from Kaniva (turn south into Madden Street) on South Lillimur Road. There is a signpost turnoff on the right to Billy Ho Reserve where there is a self-guided and signposted bushwalk (3 km return). Numbered pegs enable the identification of various species of desert flora such as scarlet bottlebrush, Mallee honey, flame heath, myrtle and desert banksias. Orchids are in flower from April to December. The birdlife is also impressive. Expect to see southern scrub robins, honeyeaters and parrots, pardalotes, wrens, thornbills and whistlers.

Mooree Reserve
Located west from Kaniva along the Western Highway. Head west and, after 10 km, turn south on Leeor Road. Mooree Reserve is a picnic area and bushwalking site which is situated around dark green lagoons and shaded by huge red gums. Wildlife and birds inhabit the site. In the 19th century, locals carted water from the lagoons to the township of Lillimur South. There are a number of canoe trees in the reserve. For more information check out https://kaniva.info/mooree-reserve.html.

Little Desert National Park
To the south of Kaniva is Little Desert National Park, covering 132,000 ha and stretching across to the South Australian border, it is the second-largest national park in Victoria. The first reserve was created in 1955 to protect the mallee fowl and the park was declared in 1968. There is a useful brochure with detailed maps which can be downloaded at http://parkweb.vic.gov.au/__data/assets/pdf_file/0007/315772/Visitor-Guide-Little-Desert-National-Park.pdf.
Despite its name, the dry hot summers and sandy soil, this is not a true desert. The park receives 400 mm of rainfall per annum (mostly in winter) and supports a range of fauna including over 220 bird species, and 670 plant species.
It has extensive heathlands with tea-trees, banksia and she oak and many spring wildflowers. Wildlife includes possums, the black-faced kangaroo, the silky desert mouse, reptiles such as the bearded dragon and the short-tailed snake. Perhaps most famous of the fauna is the mallee fowl which is indigenous to this area. Its presence is signified by a mound up to five metres in diameter and one metre high. It lays its eggs inside the mound which it adjusts each day to maintain the temperature at 33° Celsius.
The Kaniva-Edenhope Road, which heads south off the highway just east of Kaniva, divides the western and middle sections of the park. Any exploration off this road will require a 4WD. Just east of the road is Broughton's Water Hole which features rare orchids and an abundance of native wildflowers in spring.

Big Desert Wilderness Park
Although listed as an attraction for visitors to Kaniva, the Big Desert Wilderness Park, which lies to the north of the town, is not easily accessible. Visitors can either drive into South Australia and head north through the park via Ngarkat to Pinnaroo or drive east towards Nhill and head north on the Nhill-Murrayville Road.
Big Desert Wilderness Park is an arid area of sandstone ridges, sand dunes, mallee scrub and heath. The infertility of the terrain has ensured that it has not been substantially altered by Europeans. Nonetheless there are lizards, snakes, birds, the pygmy possum, the hopping mouse and other small mammal species.
Access is via the Nhill-Murrayville Rd which runs parallel to, but 5 km east of, the park's eastern boundary. It is only suitable for two-wheel drives in dry weather and, as there is no vehicular access within the park, this is as close as you get. Parks Victoria advise people interested in exploring the park to walk 5 km from the road through a strip of public land into Big Desert.
There are no facilities within the park. There are two basic camping areas on the Nhill-Murrayville Road. The Broken Bucket Tank Reserve is 55 km north of Nhill and the Big Billy Bore is 107 km north. The former has pit toilets, an information shelter, picnic and barbecue facilities. There is a Parks Victoria website - check out http://parkweb.vic.gov.au/explore/parks/big-desert-wilderness-park and a downloadable and excellent Birds of the Mallee Parks for birdwatching enthusiasts - http://parkweb.vic.gov.au/__data/assets/pdf_file/0006/515877/Park-note-birds-of-the-Mallee-parks.pdf. It suggests that the birds to be seen in the park include the emu, Mallee fowl, Stubble Quail, Black-Shouldered Kite, Black Kite, Whistling Kite, Spotted Harrier, Brown Goshawk, Collared Sparrowhawk, Wedge-tailed Eagle, Brown Falcon, Nankeen Kestrel, Australian Bustard, Little Button-quail and Painted Button-quail, Common Bronzewing, Crested Pigeon, Galah, Major Mitchell's Cockatoo, Purple-crowned Lorikeet and many more.

* Prior to the arrival of Europeans the area was home to the Tyatyalla Aborigines.

* A squatter named Heighway Jones from South Australia took up land around Kaniva in 1845.

* Jones claimed to have sheep grazing there by 1846.

*  The Tattyara (sometimes spelt Tatiara) run was gazetted in 1851. Tattyara was named after the Tyatyalla Aborigines who inhabited the district.

* By 1852-1853 the gold escort route from Melbourne to Adelaide was passing through the district.

* The first township in the area was Lawloit which developed around 1868.

* The first selector in the district arrived in 1875.

* The township of Lillimur South developed in 1877 and was soon followed by Lillimur North.

* From 1879 selectors started to establish wheat farms and 'mullenised' the land, which is to say it was cleared with a red-gum roller invented by a South Australian named Mullens. The roller was three metres long and one metre in diameter and was hauled by a team of 10 bullocks. It crushed the mallee trees and cleared land which could then be ploughed.

* Another settlement named Budjik, as it was situated on Budjik Hill, developed when James Fry and Co. built a flour mill and grain shed there in 1881.

* A post office was opened in April 1882 and the town officially changed its name to Kaniva. A Methodist Church was opened that year.

* In 1883 a school was opened and the first edition of the Lillimur and Kaniva Courier and West Lowan Representative was published.

* The Lillimur Agricultural and Pastoral Society was formed in 1884.

* The railway between Dimboola and Serviceton reached the town in 1887. The railway station was completed that year.

* 1889 saw the building of the Anglican and Presbyterian churches.

* The local Shire Council held its first meeting in 1891.

* Soldier settlement farms were opened after World War I.

* By 1994 66% of the district's agricultural land was occupied by sheep, wheat and barley farming.

There is a useful local website. Check out https://www.kaniva.org. 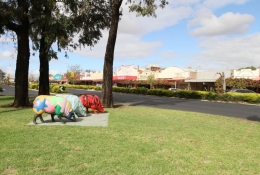 Sheep art outside the Windmill Cafe, the town's Visitor Centre 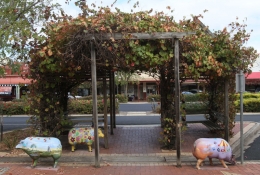 Sheep art at the pedestrian crossing in the main street 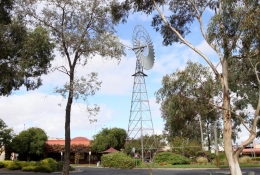 The Big Windmill outside the Windmill Cafe 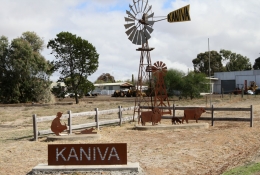 Silhouette figures and a windmill at the entrance to Kaniva 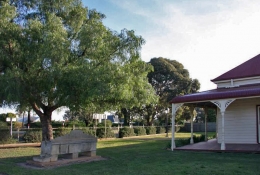 The impressive horse trough outside the Kaniva Museum 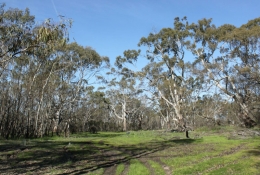 The beauty of the Australian bush at the Mooree Reserve