The Western Australian Tourism Commission describes Kanowna as: 'Perhaps the most incredible of all ghost towns. In 1905 there were 12,000 people living in this town 18 km north east of Kalgoorlie-Boulder. There were 16 hotels, two breweries and an hourly train service to Kalgoorlie. Nothing now remains except rubble, tourist markers and memories.' Today it stands as an enduring statement about the nature of mining. From 12,000 people to nobody and from vast gold riches to nothing and then, when you visit the Kanowna Belle Gold Mine lookout and look over the vast open cut mine, a reminder that everything is dependent on technology and the price of the precious metal.

Kanowna is located 615 km east of Perth via National Highway 94 and 22 km north-east of Kalgoorlie.

The mining boom town was originally known as White Feather but that was changed to Kanowra, an Anglicised version of 'gha-na-na' meaning 'place of no sleep' in the local Wangkathaa Aboriginal language.

Wandering Around a True Ghost Town
Using a combination of sponsorship and monies raised through donations the Kalgoorlie Historical Society has managed to place signs along the dirt roads and in the scrubby bush to indicate where the town's main buildings were. It is fascinating to wander around Kanowna, read the plaques and imagine what life was like before the 1950s. All the evidence is that it was a wild town and certainly some of the stories belong more to mythology than to hard fact. At one point a man named Tom O'Connor found a staggering £15,000 worth of gold nuggets right next to the cemetery. Instead of respecting the dead the local community decided the cemetery was a good place for prospectors. Amusingly the Methodist section was soft clay and easy to dig where the the Catholic section was quartz and needed to be blasted.

By the end of the nineteenth century the goldrush was over but, in a stratagem to keep people in the town, the local priest, Father Long, went to the Kanowna Hotel, stood on the balcony, and quite falsely declared that a gold nugget weighing nearly 45 kg had been found. He named the non-existent piece of gold the Sacred Nugget. When the miners found out it was a hoax they were so furious they very nearly burnt down the town. There are a number of books about the town in its roaring days which are well worth reading before you make a visit.

* Prior to the arrival of gold prospectors the area had been sparsely populated by people from the local Wangkathaa Aboriginal language group.

* Gold was discovered in 1893 and miners flocked to the district.

* By 1894 a town site had been selected. It was named White Feather.

* In 1895 a battery had been established. In that same year a hospital was opened.

* By late 1896 underground mining had replaced the search for alluvial gold.

* In 1897 both the railway and electricity reached the town although by this time people were starting to leave.

* In 1898 the local Catholic priest, Father Long, started a rumour that he had seen a 45 kg gold nugget. It was not true.

* By 1912 Kanowna was no longer a municipality.

* In the 1930s both the post office and the railway closed.

* In 1989 gold was discovered at the Kanowna Belle Gold Mine.

* The Kanowna Belle Gold Mine was purchased by the Canadian mining company, Barrick Gold, in 2006.

* In 2014 Barrick Gold announced they had sold their Kanowna interests to Northern Star Resources for $A75 million.

There are no websites for the ghost town. 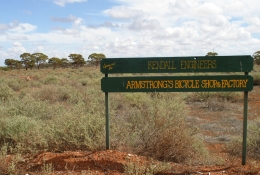 A sponsored sign where Armstrong's Bicycle Shop and Factory once stood. 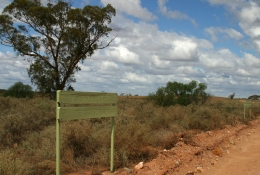 A sign where the Western Australian Bank once stood. 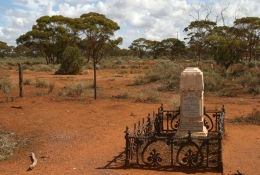 A solitary grave where once 12,000 people lived. 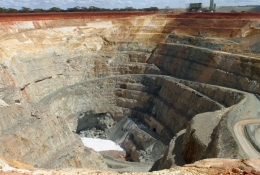 The open cut mine currently owned by Northern Star Resources.