Small rural centre in the heart of the Murray Mallee

Karoonda is a pleasant and quiet township which came into existence when a bore was dug and reliable water ensured that farming could begin in this area of the South Australian mallee. The railway arrived a year later and a town grew up to serve the surrounding agricultural area which is noted for its fine merino sheep, its crops of wheat and barley and its breeding of pigs, beef cattle and alpacas. Today the walk in the park beside Railway Terrace offers a surprisingly rich display of historic and artistic artefacts.

Karoonda is located 146 km east of Adelaide and 66 km from Murray Bridge.

It is accepted that the word Karoonda is a local Ngarkat Aboriginal word meaning "winter camp".

Karoonda Historic Walks - Railway Terrace Walk
There is an excellent brochure, which can be downloaded, at https://karoonda.com/wp-content/uploads/2015/04/Karoonda-Historic-Walk-1.jpg. It is a simple walk with most of the attractions being located in the park which runs beside Railway Terrace.

Of particular interest:
The Big Ram - it must be the smallest "Big Thing" in the country. Erected in 1997, and only moderately larger than an actual ram, it is a celebration of the district's sheep and wool industries. Under the heading "Ramifications - The Merino Ram - Father of Prosperity" an extensive history of sheep grazing in the area notes: "This 'Big Ram' symbolises what is achievable when the pioneers overcame early struggles and disappointments with sheer determination and faith in their goal, creating the flourishing farmland seen today out of a semi-desert wilderness ... The Big Ram Project commenced with a concept developed by local resident Don Anderson and was facilitated by the Karoonda Development Group Inc.  ... a community art project in recognition of the past and current value of the sheep industry to the community and as an ideal way to provide an identifiable community icon which encourages passing traffic to stop and enjoy the facilities of Karoonda ... The sculpture was built under the guidance of Adelaide artist, Mr Andrew Stock, together with volunteer labour and assistance. The tiles on the base were constructed by students at both East Murray Area School and Karoonda Area School as part of the Art curriculum ... in excess of 650 community volunteer hours have been invested into the project over the last three years. Stone for the stone wall was sourced from local quarries and it is estimated that nearly 18 tonne of stone was used. The total cost of the project approached $12,000."

The Karoonda Meteorite Cairn - On 25 November, 1930 a meteorite fell 3.6 km from the town. It was later analysed by the Geology Department of the University of Adelaide which reported: "The dark greyish interior of the meteorite consists of a dull ground-mass relieved by numerous black chondrules and spangles of a brassy mineral which is probably troilite (ferrous sulphide). The chondrules are very hard and compact and may quite easily be rubbed away from the friable ground-mass by the fingers. Undoubted metallic nickel-iron is present in such small amount as to be indistinguishable in the hand specimen. A rough microscopical examination reveals that olivine is by far the most important mineral in the ground-mass. Some hypersthene is also present."
The meteorite shattered on impact and, although the total fragments collected weighed 41.73 kg, the largest piece was only 3.2 kg. A piece of the meteorite is on display in the District Council offices at 11 Railway Terrace, Karoonda. The inscription on the case tells the story: "On November 25th 1930 South Australians were started by the appearance of a brilliant “Fire Ball”.  As a result of astronomical observations and information received from various localities it seemed probable that a Meteorite had landed somewhere in the neighbourhood of Karoonda. Under the leadership of Processor Kerr Grant and Mr GF Dodwell a University Party made a thorough search of this District and was rewarded on December 9th by the discovery of the Meteorite, the locality being Lat 35º6 South, Long 139º56 East about 2¼ Miles due East of Karoonda. The Meteorite material consisted of two large pieces and a very great number of small fragments weighing in all about 92 lbs.  The Karoonda Meteorite is of the Stony Type and of very unusual composition.  It consists mainly of Silicates of Iron and Magnesium Iron Sulphites and a very small amount of Iron-nickel Alloy.” There is a monument recording the event in RSL Park on Railway Terrace.

Police Heritage Site
The plaque reads: "On Tuesday 12 March 1957 Senior Constable Harold Rae Pannell, aged 38, Officer-in-Charge of the Karoonda Police Station, was murdered in the course of his duty in the district of Bowhill, approximately 30 km north-west of Karoonda. Senior Constable Pannell was a well respected member of the South Australian Police who faithfully served the community of Karoonda and district from 27 July 1951 until his tragic death. He is buried in the Centennial Park Cemetery."

Karoonda Railway Crane
Located in the park beside Railway Terrace, the railway crane is a symbol of the importance of the rail to the town. In 1917 a three ton (3.05 tonne) crane was erected at the site. In 1976 that crane was replaced by this 5 tonne crane which was used until the railway stopped heavy freight handling. As the sign notes: "This manually operated crane remains in its original position as a reminder of the importance of the railway in the development of the Karoonda district over many decades, when large quantities of general freight were handled here."

Centenary Walk
Located in the park beside Railway Terrace, the Centenary Walk "commemorates the pioneers of Karoonda and was unveiled in 2011 during the centenary of the sinking of the first bore. The walk features a series of pavers leading up to a windmill structure." See Monument Australia's website - https://monumentaustralia.org.au/themes/landscape/settlement/display/112477-centenary-walk - for more details.

Karoonda Shuffle
Located in the park beside Railway Terrace, Garry Duncan’s six "Karoonda Shuffle" sculptures portray the rhythm of the grain crops grown in the district. They cost $60,000. The silhouettes are made with shuttle screens that create the visual of wheat moving in the wind. Duncan has explained: "Two screens make the shuffle and they are offset so that as you walk past, they shuffle in the wind like wheat.” Check out https://www.murrayvalleystandard.com.au/story/4425085/heart-of-the-mallee-design/ for more information.

Karoonda Pioneer Historical Park
Located at 22 East Terrace, near the corner of North Terrace, Karoonda Pioneer Park includes a railway display, an early farm machinery display and an attractive Lions Nature Trail. The sign describes its mission: "It is a tribute to the men and women whose toil, faith and resilience enabled scrub to be transformed into productive farmland."
The original Mallee Lands Railway Museum was centred on a rebuilt railway siding (Yurgo) with an old van housing interesting artefacts. The Pioneer farmhouse is a house which was built at Sandalwood in 1913. It houses a collection of artefacts from the period notably some excellent and unusual laundry equipment including washboards and early washing machines. There is also a straw roofed stable which has been reconstructed, an original smithy with tools and a forge, the pioneer Methodist Church from Wynarka and the Kunlara Post and Telegraph Office.
Beyond the park is a one kilometre Lions Nature Trail through mallee with eight varieties which flower through the year. There are seats along the way. There is a detailed map and additional information which can be accessed at https://karoonda.com/wp-content/uploads/2015/05/Pioneer-Park-Nature-Trail.jpg.

Karoonda Silo Art
Searching for a unique variation from the ever-growing tendency to paint murals on the local wheat silos, Karoonda Shire Council came up with the original variation of (a) painted art during the day and (b) permanent projected art at night. A rather brilliant way to keep visitors and travellers staying for hours in the tiny town. The daytime art, depicted during the daylight hours, was created by Heesco (a Mongolian artist who now lives in Melbourne) and depicts local rural scenes - a sheep dog, sheep, a desert sunset, local birdlife and eucalypts. Every evening from sunset until 9.00 pm images are projected onto the silos. This is a constantly changing exhibition with artists being invited to contribute. Check out https://karoondasiloart.com.au for details.

Drive Loops
There are two local drive loops (see https://karoonda.com/drive-loop-2/) which includes a number of places of interest in the small towns spread across the wheatbelt.

* Prior to the arrival of Europeans the area was home to the Ngarkat Aboriginal people.

* The area was first settled in the 1850s but the land was harsh and droughts drove the farmers from the land.

* In 1859 Chucka Bend Station was taken up. Karoonda now stands on part of that property.

* By the 1880s grazing had totally ceased in the entire district.

* The town came into existence as recently as 1910 when a bore was sunk.

* By 1911 there was a general store and the need for a school became obvious when it was found there were 15 children within walking distance of Karoonda siding which was a basic train stop.

* 1911 saw the sinking of the first public bore in the town.

* In 1912 the first train from Tailem Bend reached Karoonda.

* By 1913 the town boasted a general store and a blacksmith and it had been formally gazetted by the government. The town was named Karoonda because that was the name of the railway siding.

* The sale of allotments saw the town grow rapidly with the construction of the local Institute building in 1914 and a number of houses being built in the next two years. It was, at this time, primarily a railway town.

* In 1930 the famous Karoonda meteorite fell near the town.

* In 1941 the town became the first in South Australia with an area school.

* By 1956 the local bore water was being reticulated through the town.

* By 1977 the town was receiving reticulated water from the Murray River.

* In 1979 the East Murray and Karoonda shires amalgamated.

* In 1986 the Pioneer Historical Park was opened.

* Today Karoonda is a typical wheatbelt town. It is said the grain silos can be seen from 7 km away. They are capable of storing 50,000 tonnes of grain. 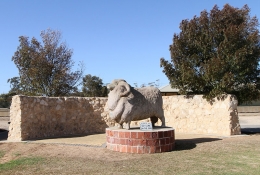 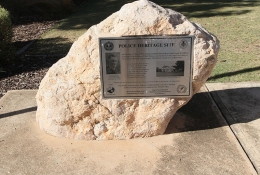 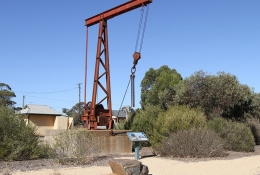 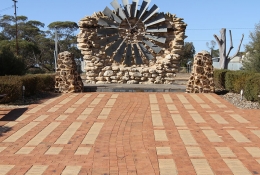 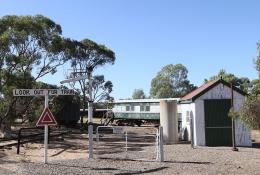 The railway display and Mindarie Pump House at the Pioneer Park 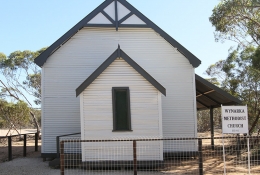 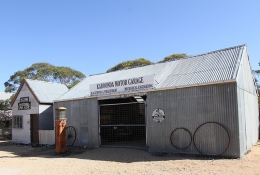 The H.S. Coombe Store and Karoonda Motor Garage at the Pioneer Park