Quiet town at the north end of Port Stephens

In 2005 Karuah, which had historically been a town on the Pacific Highway, was bypassed and, as a result, it became a quiet and relaxing holiday destination and the gateway to the northern arm of Port Stephens. Today it is primarily a holiday resort beside the Karuah River offering a boat ramp and picnic spot.It is ideal for swimming in a tidal pool, fishing and boating. The surrounding area is known for its excellent oysters which can be purchased directly from the town's oyster farms.

Karuah is located on the Karuah River, 197 km north of Sydney via the Pacific Motorway and Tarean Road. It is 15 m above sea-level and 53 km north of Newcastle.

The settlement was originally named Sawyers Point and the river was named Clyde by Governor Lachlan Macquarie. Both these names were changed to Karuah, believed to be a Worimi Aboriginal word meaning "native plum tree". Like many words of Aboriginal origin there is some debate with other sources insisting it means "plenty of fish", "fast flowing water" and even "big water hole".

Around Karuah
The primary appeal of Karuah lies in its location beside the Karuah River. It is ideal for a picnic in Longworth Park, a swim in the tidal pool and a walk along the banks of the river. The main historic interest in the area is located in the tiny towns which are nearby - Swan Bay, North Arm Cove, Carrington and Tahlee.

Historic Karuah and the Heritage Walk
There are a number of signs around the town and particularly near the bridge and at Longworth Park. All of the signs tell the story of the early history of the town and the district. Near the Karuah River Bridge are the remains of the original Ferry Master's Cottage. They can still be seen at low tide. The hut was built around 1918 by Jack Dillon and was occupied by the Ferry Master, George Neil, and his wife, in 1923. The Neil family remained in the house until 1970. It was destroyed by fire some time later.

Karuah Bridge (1957)
There is a sign beside the bridge which explains that it was constructed as part of the NSW Department of Main Roads policy of replacing ferry crossings where possible. It was "the first steel truss bridge in Australia and used high strength steel bolts instead of rivets. These high tensile bolts were tightened beyond their elastic limit. Aluminium anti-corrosive coating was also innovative in bridge construction at the time." The workmen on the bridge were predominantly Italian. The bridge was built by EPT and opened on 14 December, 1957. The steel for the trusses was imported from England. The total cost was £356,000. It was bypassed in 2004.

Karuah Wetlands Board Walk
The start to this walk is located next to the Karuah Visitor Information Centre. The walk heads north into the Karuah Wetlands, a mangrove area beside the Karuah River which is home to migratory birds, koalas, wallabies and other marsupials. There are also stands of spotted gums, ironbarks and bloodwoods.

Fresh Oysters
There are oyster sheds on either side of the Karuah River Bridge. In season they will sell oysters to the public. They are deliciously fresh. The town also has a reputation for oyster pies.

Swan Bay
Located 15 km south-west of Karuah, Swan Bay is a tiny village and a major centre for oyster cultivation at Port Stephens which is reputedly the largest oyster-producing area in the country. Moffat's Oyster Barn Restaurant, located at Moffats Road, Swan Bay is a suitable place to sample the excellent Port Stephens oysters, tel: (02) 4997 5433. A local history website about Swan Bay (see http://tracingourhistory.com/history/swanbay.html) notes: "The oyster farming industry began in primitive fashion at Swan Bay by simply knocking the oysters off the rocks (rock oysters). As the demand for oysters grew, so the pioneering oyster farmers began to dredge the mud flats (mud oysters). Eventually oysters were grown in shallow mud flats on large stones placed in rows upon timber and also upon mangrove sticks."

North Arm Cove
Located 12 km east of the Karuah via the Pacific Highway and North Arm Road, North Arm Cove is a small settlement on the northern shore of Port Stephens. Shortly after World War I when there were a number of proposals for a national capital, North Arm Cove was considered. By 1918 it was suggested as an ideal location for a major industrial port city ("the New York of Australia" as some optimist suggested). Walter Burley Griffin, the architect responsible for the design of Canberra, put forward a design but when his company went into liquidation the developer, Henry F. Halloran bought up the land and subdivided it in expectation of the sales and the linkage of the 'city' to the main railway line but nothing came of the proposal and it was greatly hampered by a "non-urban" regulation which has since stymied development of the area. Today it is a very attractive little settlement amidst forest on the shore of Port Stephens. The Aboriginal name for the point was Weepi and it is common to see wallabies, koalas and kangaroos in the area.

The Australian Agricultural Company: Carrington and Tahlee
The Australian Agricultural Company (AAC) was formed in London in 1824 to take advantage of a report recommending that wealthy settlers should be given land and convict labour in order to develop the local economy. Sensing an opportunity of obtaining cheap land and labour the company aimed at producing fine wool for English mills and crops for the English market. The company was granted half a million acres on the northern side of Port Stephens in 1826 and a base of operations was established at Carrington with 80 settlers, 720 sheep and some horse and cattle. Over 200 acres were quickly cleared, vineyards were established and, by 1830, an extensive settlement was in place with 300 employees, 11 permanent houses, workshops, military barracks, a smithy, a school, a shearing shed and slaughter house and a number of temporary buildings. Today there are remnants of the AAC (as it was known) in the area. It eventually came to own a million acres and, as a real rarity, it still operates today - albeit in a very different form. The two buildings which are well worth inspecting, and which are extant remnants of the golden age of the AAC are:

Church of the Holy Trinity
Built by convict labour, the Church of the Holy Trinity at Carrington was established by the AAC under the instructions of Commissioner Phillip Parker King. It was consecrated in 1851, closed in 1862, restored in 1880 by Robert Hoddle White, and reconsecrated in 1888 as the Church of St Andrew. It ceased its life as a church in 1947 and is now privately owned and not open to the public.

Other AAC Artefacts
Other leftovers from the AAC era include a kiln (1834), used for making the settlement's building bricks; the boat harbour, tarring pits, claypits and the company bell. About halfway between Tahlee House and the Church of the Holy Trinity, on elevated ground, is the old AAC cemetery.

Tahlee House
Tahlee House is located at Tahlee, 600 m beyond Carrington, and was built by convict labour in 1826 for the AAC's first commissioner, Robert Dawson. It is an excellent example of colonial architecture. A fine sandstock brick homestead, impressive reception and ballroom wing and outbuildings are beautifully situated upon extensive grounds which run from the shoreline up the eastern side of the hill on which the house is located.

Additions to the original structure were made by subsequent occupants in 1832, the mid-1830s and, most notably, in the 1880s when Robert Hoddle White extended and rebuilt the verandas, erected the large timber, late Victorian billiards room and ballroom and did much of the landscaping and planting of exotic species. Mary McGuinness has noted: "One interesting feature at Tahlee House is the six pounder cannon on the front lawn. It has the Royal Cipher of George III (GR) inscribed on it. It is one of several cannons that were on the Tahlee property which have casting dates of 1812 and 1819. It is believed that they originated  from the Dawes Point Battery (Sydney) on its dismantling in 1870s and 1880s."

Boat Harbour
A stone and brick slipway was built below the house. Known as the Boat Harbour,it  was used to build the steamer Karuah under the direction of AAC superintendent Sir Edward Parry in 1831. The wharf which was once attached has been demolished. All that remains of an early signalling platform is a stone on the crest of the hill above the house. There is also a cottage reputedly dating back to 1825. The company sold Tahlee House in 1853. The complex is currently owned by the Tahlee Bible College who are happy for visitors a look around on weekdays. For more detail check out http://historyservicesnswblog.blogspot.com.au/2014/02/carrington-and-tahlee-off-beaten-track.html which has a comprehensive history of both buildings.

* Prior to the arrival of Europeans the area was inhabited by the Worimi Aborigines who fished the local waters.

* In 1790 five convicts who had escaped from Sydney Town reached the area. They were believed to be the spirits of dead ancestors, were given wives and remained with the Worimi for five years.

* The Karuah River was first surveyed in 1795 as part of a wider survey of Port Stephens.

* In 1811 Governor Lachlan Macquarie passed through the area and named the river the Clyde.

* By 1816 a permit had been issued to allow cedar cutting in the district.

* In 1824 the Australian Agricultural Company acquired one million acres from Port Stephens to the Manning River. The site of the future town was part of this huge holding.

* By 1870 the river bank settlement of Aliceton had a sawmill and houses for the workers.

* The first school in the district was built at Aliceton in 1884.

* By the late 1800s oyster farming had begun in the area.

* In 1901 land at Karuah was being offered for sale as the town site had been formally subdivided.

* By 1914 Johnson had a punt which he used to ferry people across the river. It was operated by a hand-wound winch and took around 20 minutes to get from one side to the other.

* In 1907 the town's name was changed from Sawyers Point to Karuah.

* By 1924 a motorised punt was moving travellers across the river.

* In 1957 the first bridge across the river was built. That same year the punt was taken out of operation.

* In 2004 the town was bypassed as part of the upgrade of the Pacific Highway.

There is a useful local website. Check out https://www.portstephens.org.au/business/karuah-visitor-information-centre/overview. 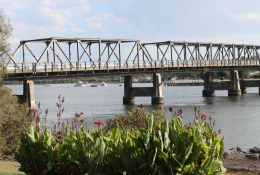 The Karuah River Bridge from the north side of the river. 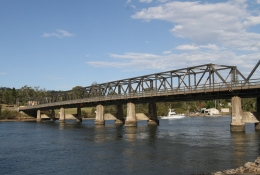 The Karuah River Bridge from the southern side of the river. 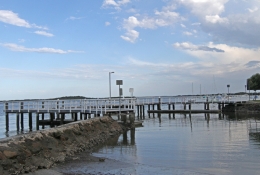 The baths in Longworth Park near the Karuah River Bridge. 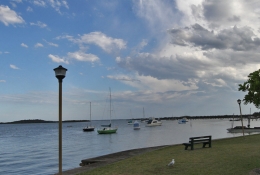 The view towards Port Stephens from the Karuah River Bridge.