Exotic tropical fishing port on the Gulf of Carpentaria.

Karumba is a fishing destination and industrial port on the banks of the Norman River where, each winter, anglers from all over Australia arrive to try their luck in the fish-rich waters of the Gulf. Once it was nothing more than a small, sleepy outback town. In recent years it has evolved into two interconnected, but quite separate, towns. There’s the “commercial-industrial centre” with its wharves, barramundi farm, prawn processing plant and MMG Century Mine loading facility. It has little interest for tourists. Then there is the “tourist centre” with a four-star motel, caravan parks, cafes, the Sunset Tavern with its views across the mouth of the Norman River, and there's the justly famous Mud Crab and Crocodile tour.

Karumba is located on the banks of the Norman River 2,154 km north-west of Brisbane, 69 km north from Normanton and 452 km north of Cloncurry.

It is accepted that 'karumba' is simply the word used to signify the location in the language of the local Kuthant Aborigines.

A Tour of the Town
The best way to see the "sights", because they are few, is to hire the local taxi and ask for a conducted tour. In recent times the taxi driver has also been the local school bus driver. She will point out the infamous “Animal Bar” (which, at one time, was so wild and unruly that the furniture was bolted to the floor more to prevent furniture-throwing than theft - it was the subject of a Red Hot Chili Peppers song in 2006); the memorial to those who went to sea in the Gulf of Carpentaria (the sign reads: "This wall was erected by the Karumba Fishing Community in memory of those who went to sea in boats and those who supported them to spend their years in the sometimes hostile waters of the Gulf of Carpentaria"); the MMG Century Mine loading facility; and the town's port and main street.

Crab and Croc Tours
It is rare for Trip Advisor to provide ten reviews all of which rate an experience as 5 out of 5 but, yes, Croc and Crab Tours run by Mark and Julianne Grunske out of Karumba, really is that good. The Grunskes designed their own boat and not only do they have a finely honed attention to detail but everything on the boat works perfectly. The seats are comfortable and everyone gets a good view. The sides of the vessel are designed so that the crab pots can be easily lifted into the boat so Mark can demonstrate the skills of crab handling and crab tying. The vessel is ideal for slowly going up and down the Norman River so saltwater crocodiles can be spotted. And, as the true highlight of the trip, the vessel can reverse onto a sand island at the mouth of the Norman River where passengers can alight and gorge on freshly cooked mud crabs, huge Gulf banana prawns and sushi marinaded in Mark’s special sauce. It deserves to get a perfect score. It really is as good as any unusual tourism adventure can get.

MMG Century Mine Loading Facility
The MMG Century Mine loading facility may be nothing more than a large building with barges moored beside it in the Norman River but it is a remarkable story of how tenacious a mining company can be when it finds rich deposits in prohibitively difficult terrain. Most Australians know, through the story of Burke and Wills, that the shoreline of the Gulf of Carpentaria is densely covered with mangrove swamps; that it is very shallow; and that it is infested with singularly unfriendly saltwater crocodiles. So when Century discovered huge deposits of zinc near Lawn Hill National Park they were confronted with a problem: how to get the material to the coast and onto ships. The solution, because the production is around 480,000 tonnes a year, was to build a 304 km underground slurry pipeline to carry the zinc mined in the huge open cut operation from Lawn Hill to Normanton. MMG then, in the late 1990s, built Century's Karumba Port with a dewatering and drying circuit, a concentrate shed and buildings, and, most importantly the MV Wunma, a barge custom-built for the shallow waters of the Norman River channel which it used to transfer parcels of concentrate to export ships anchored in the Gulf of Carpentaria. To read more about this fascinating project check out http://www.mmg.com/en/Our-Operations/Mining-operations/Century.aspx.

Sweers Island
Sweers Island is located 38 nautical miles north of Karumba. It is the most south-easterly of the Wellesley Group of islands. The island is 7 km long and 1.5 km wide and is surrounded by a coral reef which makes it a popular destination for anglers.

In 1802 the island was named by Matthew Flinders who came ashore, climbed and named Inspection Hill and named the island after Salomon Sweers, a councillor in Batavia who authorised the journey of Abel Tasman to the area in 1644. It was later visited by the Beagle, which had earlier carried Charles Darwin on his voyages of biological investigation. The party on board the Beagle were delighted to find the name of Flinders' vessel, the Investigator, carved on a tree.

Anglers are drawn to the island because of the Gulf's rich fish stocks which include sweetlip, cod, coral trout, parrotfish and stripeys with pelagics including Spanish mackerel and tuna in winter.

The island's rich vegetation is home to over 50 bird species including the rose-crowned fruit dove, bustards, ducks and curlews. Most of the island is Aboriginal freehold being traditionally used by the Kaiadilt people. Between September and November it is possible to see the unusual tubular cloud formations known as Morning Glories which roll across the Gulf in the early morning.

* Prior to the arrival of Europeans the local Kuthant Aborigines lived and moved through the area.

* By the 1870s a telegraph station had been built on the site of the present town. At the time the tiny settlement was known as Norman Mouth.

* In 1937 Karumba became a refuelling point for Qantas and BOAC flying boats travelling from Australia to London.

* During World War II the town was an RAAF base for Catalinas flying into New Guinea, Timor and Indonesia.

* In 1954 Lloyd Clarke pioneered fishing in the area and was soon exporting over 130,000 lbs (58,967 kg) of barramundi and king salmon from the Gulf. Clarke was the first person to fish commercially in the Gulf of Carpentaria.

* By the 1950s it was the main access point for people wanting to fish in the Gulf of Carpentaria.

* In 1958 Lloyd Clarke recommended that the Queensland Government conduct a prawn survey in the Gulf. The survey was carried out between 1963-1965.

* In the 1960s and 1970s the town became the centre for the Gulf fishing industry. Today it is still home to extensive prawn, mud crab and the barramundi fishing fleets.

* The first catch of commercial prawns occurred in 1964.

* In 1976 the biggest flood in living memory caused huge damage to the town.

* In 2006 the town's infamous Animal Bar was immortalised when the Red Hot Chili Peppers named a song on their album Stadium Arcadium after the wild place.

There is a useful local website at http://karumba.qld.au which also has information about Sweers Island. 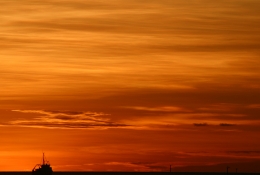 The sunsets across the Gulf of Carpentaria make the long trip worthwhile. 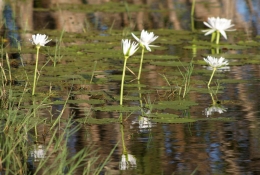 At the end of the wet seasons the rivers and lagoons are alive with lilies. 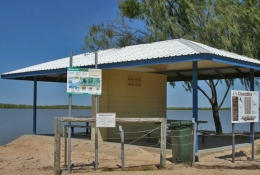 Picnic facilities and crocodile warnings at the tourist end of town. 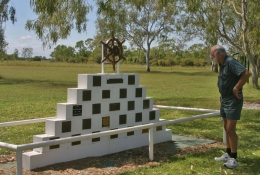 Inspecting the memorial wall to the anglers who have risked their lives in the Gulf of Carpentaria. 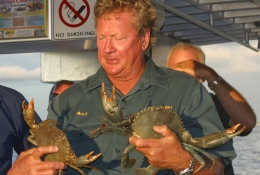 Mark Grunske demonstrates how to hold a mud crab on his Crab and Croc Tour. 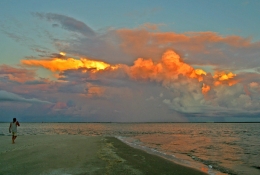 Storm clouds and sunset over the sandbar at the mouth of the Norman River. 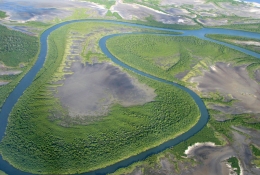 The Norman River meanders through the mangrove mud flats - this is why Burke and Wills never reached the coast.