Keilor is a suburb at the north-western edge of metropolitan Melbourne which is a mixture of residential dwellings, market gardens and industry. It is famous for the hugely impressive Organ Pipes National Park which are located 8 km north-west of Keilor's centre.

Keilor is located on the north-western edge of metropolitan Melbourne, 27 km from the city centre via the M2 and Calder Highway.

Keilor was named by James Watson of Leith, Scotland. He named it after his father's property on the Chapel of Keilor - 'keilor' is the Gaelic word for 'plenty'.

St Augustine's Roman Catholic Church
Located at 636 Fullerton Road, Keilor, St Augustine's Roman Catholic Church is one of the oldest surviving churches in the district. Built c.1858 to replace an earlier timber building, it is listed on the Victorian Heritage Database (see https://vhd.heritagecouncil.vic.gov.au/places/106096/download-report for more details) which explains its significance as: "St. Augustine's Keilor is of regional architectural and historical significance as an unusual and early example of an English Gothic church, executed in local materials and occupying the high point of the locality. It is expressive of the growth occurring in the colony at the time of the gold rushes, and the development of the early rural farming community with strong Irish Catholic links in Keilor. The building is, according to the Australian Heritage Commission, 'a handsome bluestone church of c.1858 with an octagonal bell-tower in the manner of the English architect Charles Hansom and probably built to his design under the supervision of the local architect J.M. Barry. A blind cement panel in the chancel arch results from the removal of an earlier timber chancel ." The doorways, windows, buttresses and detailing are particularly impressive.

Overnewton
Located at 51 Overnewton Road, Overnewton Homestead, now known as Overnewton Castle, is Keilor's oldest building. Today it offers high teas, is a suitable location for weddings and functions and provides accommodation. The excellent website (https://www.overnewtoncastle.com.au) offers a short history of the building: "Overnewton Castle was built by William Taylor in 1849. The Scotsman bought 13,000 acres of rich grazing land just west of the Keilor township. Taylor built a simple single storey bluestone colonial style homestead. This consisted of 6 rooms with large shuttered windows and wide verandas. The homestead was positioned on a gentle slope overlooking Keilor and afforded extensive views of the surrounding countryside ...It was not until William Taylor returned from a trip to Scotland in 1859 that the grandeur of his dreams became apparent. He set about turning the functional colonial homestead into a miniature Scottish Baronial Castle. The Stately two-storey wing was added, along with the bluestone Dairy & Butcher Shop and the Private Billiard Room now used as a chapel for wedding ceremonies.
"Overnewton is built in the Victorian Tudor style, inspired by 16th century English & Scottish architecture. The Scottish baronial style is characterised by its rough textured masonry, steeped pitched roofs and overhanging battlement corner turrets. The candle snuffer roofs show the influence of the French architecture. The bluestone walls were quarried on the estate and rendered with a yellow gravel and stucco finish. Above the large windows of the master bedroom is the Taylor family crest – a mailed arm and fist enclosing a dagger and the motto “Semper Fidelis” (always faithful) and above several other windows are the carved initials of HT, T 1859 and WT.
"After the completion of this wing the homestead consisted of over 35 rooms including 7 bedrooms (the master room included a small circular room and a dressing room) schoolroom, library, drawing room, 2 kitchens, 5 servants rooms and the billiard room. There are still many original features such as tiles in the bathrooms, claw foot bath and the old IXL wood stove in the kitchen. Several out buildings on the estate include a bluestone butchery and dairy, lamp room, bootroom, coachhouse, stables, woolshed, shearing sheds and machine shed.
"William Taylor passed away in 1903 aged 85 and six months later his wife Helen aged 71 passed away. Their eldest son William Henry continued to manage the estate until he passed away in 1939 aged 81 and his wife Beatrice in 1948. The estate remained in the Taylor family until 1959."

Organ Pipes National Park
Located 8 km north-west of Keilor, the Organ Pipes National Park (85 ha) is one of the wonders of volcanic activity in Australia. It is also a celebration of how volunteer activity can transform a landscape.
There are two reasons why people visit the Organ Pipes: to go bushwalking and to inspect the extraordinary volcanic formations. The pipes are columns of volcanic basalt which were formed approximately one million years ago when lava, which had flowed into the valley from surrounding volcanoes, started cooling. By a quirk of geology they cooled into hexagonal columns. Nearby on an easy walk from the car park are other interesting volcanic formations including the 'Rosette Rock' (a radial array of basalt columns similar to the spokes of a giant wheel. Its formation is attributed to the cooling of "a pocket of lava, probably in a spherical cave formed from an earlier lava flow")  and the 'Tessellated Pavement'. The latter was formed when some of the basalt columns were flattened by water erosion.
Fossils in the park's sedimentary rock date back 400 million years, indicating that the sea once covered this land. The heavy clay soils produced by the basalt have cultivated remnant areas of grassland which were once common on the western plains but are now rare owing to grazing and agriculture.
Near the car park there is a placard which explains:
“This small park is an oasis of bushland and native grassland in an otherwise cleared and weed infested environment. Reserved for its striking geological features, the denuded landscape has been gradually replanted and restored over many years. The revegetation work continues today.
Revegetation
Originally infested with weeds like African Boxthorn and Artichoke Thistle, the park is an award winning tribute to the tireless efforts of the Friends of the Organ Pipes National Park and the park staff. Native grasses like Wallaby Grass and Kangaroo Grass now grow in an open woodland of gums, wattles and she-oaks.
Wildlife
Superb Blue Wrens dart amongst the plants, while Little Eagles and Black-shouldered Kites fly overhead. Eastern Grey Kangaroos and Swamp Wallabies graze on the grass, possums and Sugar Gliders live in the trees, and Platypus frequent the creek. Lizards and snakes are about too. The park is a valuable wildlife refuge, and part of the important Upper Maribyrnong Vallley wildlife corridor.
Geology
Volcanic lava flowed over the land, covering everything in its wake. Spectacular rock formations like the Organ Pipes endure from this ancient time.
People
Once a rich grassland providing food for the Kurnung Willam Balluck people. Then farmland for some 140 years, growing wheat, oats and barley for Melbourne. Dedicated as a National Park in 1972.
For more information check out https://www.parks.vic.gov.au/places-to-see/parks/organ-pipes-national-park.

Brimbank Park
Located at the end of Brimbank Road (which runs off the Keilor Park Drive) this reserve of red-gum woodlands and open grasslands is located on the banks of the Maribyrnong River. There are walking and cycling trails, a picnic area with toilets, a playground and barbecues. There are three walking tracks through the park - (i) a 30 minute walk which is gentle and easy (ii) a river circuit which takes around 45 minutes return and has a couple of low hills and (iii) a fitness circuit which takes around an hour and has three low hills. The park is open from 8.30 am to 5.00 pm, extending to 7.00 pm during daylight savings. There is an excellent guide to walking in the Park which can be found at https://bushwalkingvictoria.org.au/item/brimbank-park and a map and details can be downloaded at https://bushwalkingvictoria.org.au/files/walks/MapsGreenWalks/BrimbankPark.pdf.

Horseshoe Bend and Box Girder Bridge Walk
Starting at the entrance to the Horseshoe Bend Farm (now closed) and winding around the bend in the Maribyrnong River this easy 3.44 km walk beside the river includes pleasant views of impressive old eucalypts and the opportunity to cross the old Box Girder Bridge which dates from 1868. See https://walkingmaps.com.au/walk/3816 for a map and additional details.

An Archaelogical Site
There is an excellent, detailed article on the site eMelbourne - the city past and present (see http://www.emelbourne.net.au/biogs/EM00792b.htm) which explains: "The Keilor archaeological site is an area of approximately 4.4 ha at the junction of Dry Creek and the Maribyrnong River, 1.5 km north of Keilor. The land was acquired in 1976 by the State Government ... The acquisition was recognition of the importance of the area to studies of Aboriginal history and local geomorphological processes.
"Interest in the Keilor site was generated in 1940 when a human cranium was unearthed during quarrying activity. Subsequent studies of the local geomorphology identified three terrace formations, which were linked to changes in sea level over the previous 150 000 years. In 1953 E.D. Gill of the National Museum of Victoria calculated the age of the cranium to be about 14 700 years BP (Before Present), using radiocarbon dating and fluorine-phosphate analysis. From the early 1960s Dr A.S. Gallus, working with the Archaeological Society of Victoria, excavated a number of sites along Dry Creek. Charcoal from a human hearth excavated by Gallus in 1971 was radiocarbon-dated to about 31 000 years BP, making Keilor one of the earliest sites of human habitation in Australia. The presence of megafaunal remains within the site provided a further point of interest for Aboriginal studies."
A femur was uncovered in the early 1950s and stone artefacts have also been uncovered, made of quartz, quartzite and chert. These have been dated at between 20,000 and 40,000 years. The bones of extinct megafauna have also been found at a deeper level.
Another excavation site, 2 km south of Keilor in the Maribyrnong Valley Area, yielded the remains of a human burial, along with stone implements, presumed hearths and faunal remains.

* Stone artefacts have been found at Green Gully which date to around 30,000 years ago.

* A cranium, stone tools and charcoal were found at the junction of Dry Creek and Maribyrnong River and dated to 14,700 years ago.

* Prior to the arrival of Europeans, the area was occupied by the Woiwurung (sometimes referred to as the Kurnung Willam Balluck) Aborigines.

* Overnewton homestead was built by William Taylor in 1849 on 13,000 acres of grazing land west of the Keilor township.

* In 1850 land sales occurred in the district. Keilor village was gazetted in that year.

* A settlement emerged in 1851 as the first stopover for coaches bound for the new goldfields at Ballarat, Castlemaine and Bendigo.

* The Keilor Road District was proclaimed in 1863. That year saw the consecration of St Augustine's Catholic Church.

* Keilor Shire was formally proclaimed in 1871.

* The Anglican church held its first service in 1877.

* By 1905 Overnewton was being broken up into smaller landholdings.

* By the 1960s the area was developing rapidly as an outer suburb of Melbourne.

* The Overnewton Community College was opened in 1987.

There is a useful, Melbourne-based, website. Check out https://www.dyob.com.au/suburbs/north-west/keilor. 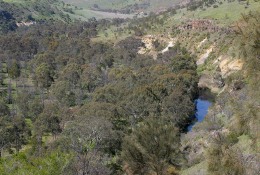 View from the lookout down Jacksons Creek near the Organ Pipes 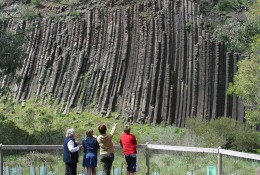 The viewing platform and the Organ Pipes 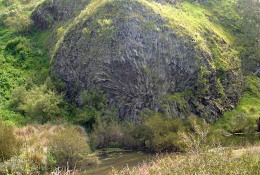 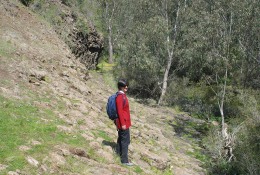 The tesselated pavement near the Organ Pipes