Rural service town known as the Gateway to the Limestone Coast

Keith is a small rural centre which owes its existence to the discovery in the 1940s that certain vital trace elements could convert this very marginal, almost desert, wasteland into a rich agricultural area. Since then it has been at the centre of an area rich in grain crops and cattle grazing. It has been referred to as the lucerne capital of Australia as lucerne is a vital local crop.

Keith is located 225 km south east of Adelaide via Murray Bridge and Tailem Bend. It is 31 metres above sea level.

In 1889 the town was officially proclaimed and named after Lord Kintore, the Governor of South Australia who was also known as Lord Keith because his ancestral home in Aberdeenshire, Scotland was called Keith Hall.

Congregational Church
Located on Heritage Street this building was constructed in 1910. It is a well-proportioned limestone church in Gothic style with red brick quoins, and entrance porch and a transverse vestry at the rear. It is now owned by the National Trust. Of particular interest are the leadlight windows which were constructed as part of the Bicentennial Project. The four windows depict Pioneer Women, Pioneer Men, Keith in 1988 and the National Trust and were constructed by 30 members of the local community under the assistance of the artist Debra Lutze. When it was built in 1910 it was the only church in the town and parishioners of all denominations attended Sunday services together. The church became the Uniting Church in 1977, and remained in use until 1987. It.is open by appointment, tel: (08) 8755 1446. Check out https://www.nationaltrust.org.au/places/keith-1910-congregational-church for more information.

Landrover on a Pole
Officially called "The Desert Conquest Memorial" and located on Dukes Highway south of the town centre, the Landrover on a Pole (as it is popularly called) is a strange monument to the AMP Development Scheme which turned the area around Keith from a desert into a hugely productive agricultural area. In the decade from 1950 the AMP Insurance Company (which was an iconic Australian company) funded the development of vast areas of bushland which were turned into rich farmland by the addition of trace elements. This resulted in the rapid growth of the farmland around Keith. The AMP Desert Conquest Memorial comprises the Landrover on a Pole and one of the original Wiles Huts where the workers on the scheme lived. The huts were made of two prefabricated steel motor garages built by the Wiles Industrial Company of Mile End and were located at Brecon, Inglewood and Sherwood. The unusual memorial was erected in 1995. Check out https://www.facebook.com/pages/Landrover-on-A-Pole/1595202677275875 for more information.

Andy Caldecott Memorial
Andy Caldecott (1964 – 2006) was a local hero. He was an outstanding off road motorcycle racer who won the Australian Safari Rally four times consecutively (2000-2003) and competed in the famous Dakar Rally in 2004, 2005 and 2006. He died from a neck injury in the 2006 Dakar Rally. The memorial is located near the Don Moseley Park in Heritage Street. Read more at https://transmoto.com.au/andy-caldecott-memorial-statue-to-be-unveiled-in-august.

Circlework Water Feature
Located in the Soldiers Memorial Park in Heritage Street, the Circlework Water Feature, known simply as "Circlework", was created by local artist, James Darling, who has explained that he wanted  "to celebrate the cycle of water through the Australian landscape with particular reference to the region's high table and extensive irrigation industry."

The Early Settlers Cottage
The Early Settlers Cottage on Emu Flats Road is located about one km out of town. The cottage was built in 1894 by William Davis. It was constructed of limestone and has four small rooms (two bedrooms, a parlour and a kitchen), a low-pitched iron roof and two huge fireplaces.Today it is owned and operated by the National Trust. It can be opened by appointment. Tel: (08) 8755 1118 or check out https://www.nationaltrust.org.au/places/keith-early-settlers-cottage.

Mount Monster Conservation Park
Mount Monster Conservation Park is a 93 hectare park which is located 12 km south of Keith on Mount Monster Road which runs west off Riddoch Highway. There are a number of walks in the park and excellent picnic and barbecue facilities. The Gwen Ellis Walking Trail is a 900 metre, 15 minute trail. The view from the top of Mount Monster (100 metres up a granite outcrop) offers panoramic views over the surrounding country. The park is noted for bird watching, wildflowers in the spring and native wildlife. The Gwen Ellis Walking Trail site (http://www.southaustraliantrails.com/trails/gwen-ellis-walking-trail) notes of the fauna and flora: "A mosaic of soil types surrounding the outcrops ranging from shallow stony soil to dark brown loams supports a diverse ecosystem of bushland including blue and pink gum woodland, mallee, broombush heath and golden and prickly wattle shrublands. Sheoaks, banksias and hakeas are other prevailing species, and in spring, a spectacularly rich diversity of wildflowers including orchids can be seen. The park also provides an important refuge for wildlife including kangaroos, wallabies, echidnas, woodland birds, and reptiles."

Ngarkat Conservation Park
Located 25 km north of Keith (entry near Coombe to Tyms Lookout and Bucks Camp), the massive Ngarkat Conservation Park covers a total of 270,152 hectares. It is now a collection of parks which includes the original Ngarkat and adjoining parks of Mount Rescue, Mount Shaugh and Scorpion Springs.
This park features a mixture of vegetated remnant coastal sand dunes, mallee and heathlands. The park has a network of trails ranging from ten minute walks to five hour hikes. It is also home to an array of wildlife including echidnas, pygmy-possums, dunnarts, Western Grey kangaroos, lizards and more than 120 species of birds. One of the highlights is the view from Tyms Lookout which is a 2-3 hour hike. There is a 29 km Border Track which runs from north to south and, because of the high fire danger, is only open from 1 April to 31 October. Camping permits are available from the Tatiara District Council and various self-registration points around the Park. Please check with the Tatiara District Council on (08) 8752 1044 for 4WD access and conditions. There is a useful National Parks website. Check out https://www.parks.sa.gov.au/find-a-park/Browse_by_region/Murray_River/ngarkat-conservation-park.

* By the 1850s Europeans were travelling through the area on their way to the Victorian goldfields.

* Near Keith is a memorial to the Gold Escort Route - the famous route which brought gold into South Australia from the Victorian goldfields. The inscription reads: 'Along this track Commissioner Alexander Tolmer led the first of 18 police escorts which under various commanders transported from Mount Alexander, Victoria to Adelaide, South Australia from March, 1852 to December, 1853 528 509 ounces of gold.'

* From 1852-1884 the area was known as Mount Monster after a large granite outcrop near the site of the present town.

* In 1889 the town was officially proclaimed.

* It wasn't until 1894 that the first resident, a Mr McIntyre, built the first house.

* In 1910 the Congregational Church was constructed. The same year saw the Keith Hotel open for business.

* The district's prosperity is a result of the CSIRO's discovery, in the 1940s, that with the addition of vital trace elements, the land around Keith was potentially very productive. The AMP Society provided money for the project and over the next two decades Keith became the centre of a productive area where cattle studs, grain crops and lucerne were grown with considerable success.

* In 1969 a pipeline from Tailem Bend brought water from the Murray River to the town.

The local website has useful information on the town and surrounding attractions. Check out https://www.tatiara.sa.gov.au/page.aspx?u=585. 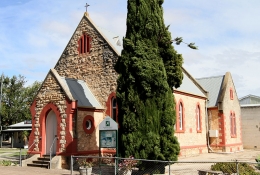 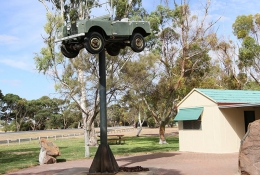 Landrover on a Pole - the Desert Conquest Memorial 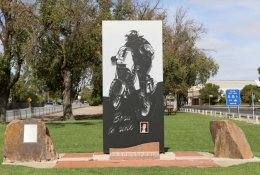 The Andy Caldecott Memorial in the main street The Circlework Water Feature in the main street 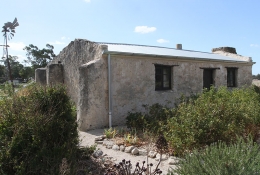 The early settlers cottage built by William Davis in 1894