Rural service centre in the heart of the Western Australian wheatbelt

Kellerberrin is a typical rural service centre in the heart of the Western Australian wheatbelt. It has an average annual rainfall of only 350 mm (13.8 inches) but this is sufficient to produce good crops of wheat, barley and oats. Like most wheatbelt towns it is functional and has few attractions for visitors. There is Heritage Trail. The local folk museum has good displays of local memorabilia and it is part of the genuinely fascinating Golden Pipeline Heritage Trail.

Kellerberrin is located 203 km east of Perth on the Great Eastern Highway. It is 246 metres above sea level.

It is widely believed that the town's name is a corruption of Killabin or Kellabrin. In the 1860s a nearby hill was always known as 'Killabin' (there are various spellings). The hill was first recorded as "Killaburing Hill". In 1864 the explorer C C Hunt recorded it as Kellerberrin Hill. One source claims that Kellerberrin is the name for the fierce ants that are found in the area, while another gives it as meaning "camping place near where rainbow birds are found" - "kalla" means camping place and "berrin berrin" is the rainbow bird. Take your pick.

1. Kellerberrin Folk Museum
Located on the corner of Leake Street and Bedford Street, the Kellerberrin Folk Museum was built of fieldstone and brick in 1897. In its time this building has been an Agricultural Hall, a school, a Court House, the offices for the local Roads Board, and, in 1972 it became the local museum. It has an interesting collection of memorabilia including a fairly comprehensive photographic record of the area. It is open on Sundays between 2.00 pm - 4.00 pm. In the Pioneer Park, which surrounds the Museum, there are a number of old pieces of farm equipment which were used in the early days of the area's settlement.

5. Post Office
The attractive and impressive Post Office, on Massingham Street, dates from 1912 although it did not open until 1913. It cost £2,882/9/8 and was built by a construction company from Kalgoorlie. It was the town's third Post Office.

12. Kellerberrin Hill
The best view over the town is from Kellerberrin Hill (take Cemetery Road off Moore Street and then the dirt road to the top of the hill of the hill). The hill was originally named Killaberrin by Charles Hunt who explored the area in 1864-1865.

The Sad Story of C.Y. O’Connor and the Goldfields Pipeline
As you drive along the Great Eastern Highway you will notice a pipeline beside the road. This is one of the greatest of all Australian engineering achievements – the Goldfields Water Supply which transports water from Mundaring to Kalgoorlie, a distance of 560 km. It changed the nature of Western Australia’s goldfields and opened up the eastern goldfields of the state.
There is an excellent and very detailed brochure The Politics of the Goldfields Water Supply Scheme, produced by the National Trust, which gives a comprehensive overview of the project. Here is a summary. The article in full can be read and downloaded at https://www.kalgoorlietourism.com/images/downloadableresources/The-Golden-Pipeline.pdf.
“The Goldfields Water Supply Scheme, built between 1898 and 1903 to deliver water 560 km from Mundaring to Kalgoorlie, has been a lifeline to the arid interior of Western Australia for 100 years and was central to the development of the State.
“In 1891 John Forrest, Premier of Western Australia, employed CY O'Connor, an Irish born engineer working in New Zealand, as Engineer-in-Chief and told him the colony required 'Railways, harbours, everything'. O'Connor immediately began work on Fremantle Harbour and improving the colony's rail system.
“When gold was discovered at Fly Flat near Coolgardie in 1892, then at Hannan's (later Kalgoorlie) in 1893, thousands flocked to the arid Goldfields. The lack of fresh water was a huge problem and resulted in poor sanitation, diseases such as typhoid and many deaths … Premier Forrest visited in 1895 and saw for himself the enormity of the problem and, as more than half the colony's population now resided in the Goldfields, he was under considerable pressure to find a solution to the water crisis …After exhaustive enquiry O'Connor and his team recommended a scheme to pump water from a dam east of Perth through a pipeline to Coolgardie …The cost was enormous but Premier Forrest was determined the scheme should go ahead and in July 1896 put the proposition to Parliament. There was criticism from several politicians and after long debate Parliament approved the raising of a loan from England of £2,500,000, more than WA's entire annual budget … Critics in the press and Parliament attacked the scheme from the beginning because of the amount of public money being spent. O'Connor was also accused of giving jobs to former colleagues from New Zealand. Sunday Times editor FC Vosper, who was also a politician, ran a personal attack on O'Connor's integrity and ability through the paper. Parliamentary debate over a contract for caulking the pipes and controversy over land dealings along the pipeline route prompted a formal Government enquiry into the entire scheme in February 1902. O'Connor was in South Australia at the time of the enquiry and returned to face more press accusations of corruption and incompetence. With Forrest's move into Federal politics, O'Connor now lacked political support.
“The new Premier, George Leake, had long been an opponent of the Goldfields Water Supply Scheme. O'Connor came under increasing strain from the attacks on his personal and professional integrity and, tragically, took his own life on 10 March 1902, just a month before pumping began.
“Lord and Lady Forrest officially opened the scheme ten months after O'Connor's death, in three separate ceremonies at Mundaring, Coolgardie and Kalgoorlie on 22 and 24 January 1903. The scheme cost £2,655,220, only slightly more than O'Connor's estimate made seven years earlier (which did not include the extension to Kalgoorlie). Water has flowed to the Goldfields ever since.
Most Western Australians today regard Charles Yelverton O'Connor as a man of genius. His story has been fictionalised by Robert Drewe, a Western Australian by birth, in The Drowner and O'Connor's tragedy is a constant reminder of how a good man can be hounded by critics beyond a point of sanity and endurance.
O'Connor was born in Ireland in 1843 and emigrated to Western Australia in 1891 to take up the post of Government Engineer-in-Chief.
O'Connor devised the plan to construct a water pipeline from Mundaring to Coolgardie. The plan was laid out in 1895 but it was so vigorously opposed in Parliament that approval to start work wasn't granted until 1898. O'Connor was vilified by people who insisted he was a crazy dreamer. A vicious press campaign was waged. He was so distressed by the attacks that in March, 1902 he committed suicide (his suicide note included detailed instructions on the construction of the pipeline). It is one of the tragic ironies of the story that when the pipeline was completed the following year it immediately liberated wheatbelt and Eastern Goldfields towns from their dependence on unreliable wells, poor rainfall and waterholes. Now they had a reliable supply of water. Water which had been transported 500 km by train to thirsty communities was converted into a daily output of 5 million gallons being delivered along 557 km of pipes.
C Y O’Connor’s water pipeline from Mundaring to Kalgoorlie passed through Kellerberrin in 1902.

* Prior to the arrival of Europeans the area was home to people from the Balardung Aboriginal language group.

* The area around Kellerberrin wasn't settled by Europeans until 1861. In that year an expedition passed through the area and observed that "there was a spring and about 2000 acres of tolerable grazing land".

* The first settler, E. R. Parker, moved into the area in 1861 with a flock of sheep and over the next decade he was followed by a number of graziers who took up large runs and survived by a combination of sheep grazing, a little wheat growing, some sandalwood cutting and some horse breeding.

* A local hill was named Killaberrin by Charles Hunt who explored the area in 1864-1865.

* The area experienced a dramatic change in 1887 when gold was discovered at Southern Cross.

* Prospectors and fossickers headed for the goldfields on the Old York Road which can through the district.

* The railway passed through the area in 1893 and terminated at Doodlakine 16 km to the west.

* When the railway moved further west the township at Doodlakine died and Kellerberrin became the district centre.

* The Doodlakine Post Office was moved to Kellerberrin and in 1897 the Agricultural Hall was built.

* Around 1900 the member for Yilgarn observed that Kellerberrin was inhabited by 'one man and a dead kangaroo'.

There is a useful local website - check out https://www.kellerberrin.wa.gov.au. 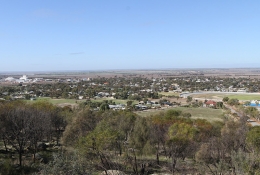 The view of the township from the Kellerberrin Lookout 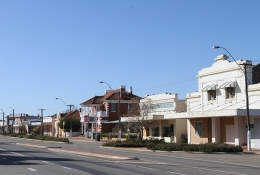 The main street of Kellerberrin 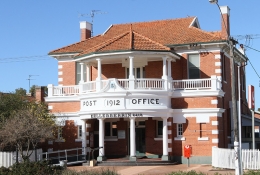 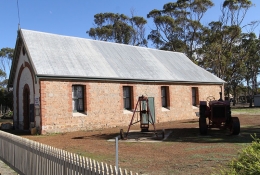 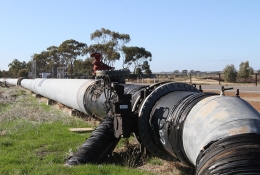