River town halfway between Sydney and the Queensland border

Kempsey is a significant rural centre which, being nearly halfway between Sydney and the Queensland border, is a popular stopping point for people making the journey north along the Pacific Highway. Located on the Macleay River it is surrounded by rich agricultural land which was primarily used for dairy cattle for over a century. Currently the town has a population of around 10,000. It is a large thriving town servicing the surrounding region and being fuelled by the importance of the Pacific Highway which is the main coastal artery.

Kempsey is located 419 km north of Sydney via the Pacific Highway. It is situated on the Macleay River.

Kempsey was named in 1836 by Enoch William Rudder after the small town of Kempsey which lies south of Worcester in the Severn Valley, England.

Slim Dusty Centre
Located at 490 MacLeay Valley Way, South Kempsey, the Slim Dusty Centre, which is open daily from 10.00 am - 4.00 pm, celebrates the town's most famous son, David Gordon Kirkpatrick, known around the world as Slim Dusty. His importance cannot be overemphasised. He was largely responsible for creating a unique Australian style of country music which, while nodding towards the US and Nashville, found its roots deep in the Australian bush ballad tradition. While Slim had eclectic tastes and was familiar with the great exponents of American country, he remained true to his roots. The centre's webpage (http://slimdustycentre.com.au) describes the exhibition as featuring "objects and images from the Kirkpatrick family’s own extensive archive, as well as contributions from fans and friends from all over the world. Visually rich and astonishingly varied, the display provides a look into Slim’s first steps into show business, the early years of adventures with Joy and their mates touring the towns and villages of Australia’s outback and the glory days of life on the showgrounds of Australia with artistes and performers of vaudevillian delights. Memory acts, dental trapeze and comedy skits were all part of Slim and Joy’s shows for years, until they settled into the type of performances for which they became famous; rollicking country music and Slim’s natural good humour, all with a very Australian flavour. Enjoy the costumes, the images of Australian life and its people, the music of some of Australia’s finest musicians and the insights into Australia’s vast history and geography that only Slim and Joy’s sixty years on the road can provide."

Macleay River Historical Society - Kempsey Museum
Located in the famous Glenn Murcutt-designed building which also houses the Visitor Information Centre (located at 62-118 Lachlan Street), this award-winning museum focuses on the history of the local area. It has an important and interesting collection of Aboriginal artefacts and is actively involved in recording the pre-European history of the district. It also has a collection of over 40,000 photographs which include photos from the 1830s through to the present day. The museum is open seven days a week from 10.00 am - 4.00 pm, tel: (02) 6562 7572.

Rudder Park Historical Lookout, East Kempsey
Developed by the local Apex Club, the Rudder Park Historical Lookout is located on the hill overlooking the Macleay River just south of the Lord Street Bridge. It is on the left as you travel north and offers excellent views of the town across the Lord Street Bridge and is the site where Enoch Rudder, the founder of Kempsey, built his original homestead.

Historic Kempsey
The local Historical Society has produced a brochure Walks in History: Central Kempsey (it can be downloaded at http://macleayvalleycoast.com.au/wp-content/uploads/2013/10/centralkempseywalk1.pdf) which is a pleasant, 30-40 minute walk past the main buildings of interest in the town. It points out the places where the floods of 1949-1950 reached; the location of Enoch Rudder's first house in the district; and the Post Office (in Belgrave Street) which is a fine example of High Victorian architecture. It was built in 1879-80.
There is another brochure, Walks in History: East Kempsey (it can be downloaded at http://macleayvalleycoast.com.au/wp-content/uploads/2013/10/eastkempseywalk.pdf) which includes the historic houses and places of interest - Rudder Park Lookout; Arakoon House; Shaweetah; Wahroonga; and Chaddies Store (home of Thomas Keneally's grandfather). Check out http://www.kempsey.nsw.gov.au/heritage/kempsey.html.

Gladstone
Located 15 km to the north east of the town on the South West Rocks Roads is the tiny settlement of Gladstone which is a largely intact river town with close links to the formative years of the Macleay Valley and the river. The local Historical Society has produced a brochure Walks in History: Gladstone (it can be downloaded at http://macleayvalleycoast.com.au/wp-content/uploads/2013/10/gladstone-walk.pdf) which is a pleasant, 30-40 minute walk past the main buildings of interest in the town.

* Prior to the arrival of Europeans the valley had been inhabited by the Ngamba-ngagu Aborigines who belonged to the Dunghutti language group.

* In 1817 the explorer John Oxley passed through the area. He found the river swampy and inaccessible.

* The Macleay Valley was first settled by cedar cutters who arrived in the area in the late 1820s.

* The first recorded European settler was Captain A.C. Innes, who at the time was the commandant at Port Macquarie. He sent a cedar cutting party to the Macleay River in 1827.

* In 1835 Samuel Onions was granted 802 acres on the Macleay River. He subsequently sold it to Enoch Rudder.

* The township itself was founded in 1836 when Rudder established a punt service across the Macleay. Rudder subdivided his land and offered it for sale in November, 1836.

* Until the early 1840s the primary European interest was in the red cedar (at one point there were 200 cutters in the valley) and once this was exhausted (around 1842) the land returned to the pastoralists.

* At various times beef, sugar cane, maize and dairy cattle have formed the basis of the valley's rural economy.

* By 1854 the government had established West Kempsey but the growth of the town was slow.

* In 1886 the borough of Kempsey was established.

* The district became the Macleay Shire in 1907.

* Kempsey, like so many towns along the New South Wales coast, was still being served by coastal ferries until 1960.

* The valley was ideal dairy country and Kempsey was sustained by the dairy industry until the 1970s.

* In 1974 Akubra established their hat factory in the town.

* In 2004 the Mid North Coast Correctional Centre was established at Aldavilla, west of Kempsey.

* In 2014 Kempsey district was recognised as one of the poorest Local Government areas in New South Wales.

The official Kempsey website - http://www.kempsey.nsw.gov.au - has useful information on attractions, heritage and history. There is also the excellent http://macleayvalleycoast.com.au website. 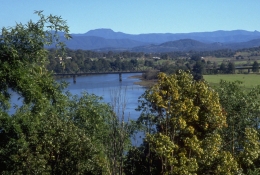 The view from Rudder Park Historical Lookout across the Macleay River. 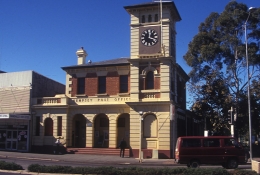