Kempton is a small, early colonial, settlement with a rich collection of historic buildings which have resulted in it being classified as an historic town. Located less than an hour north of Hobart, and just off the Midland Highway, it is an historic anomaly - a delightful town with not a single gift shop or sign of tackiness to be seen. It offers the possibility of exploring a 19th century Tasmanian village largely untouched by modern development.

Kempton is located 49 km north of Hobart. It is bypassed by the Midland Highway.

When European settlers arrived in 1814 they called the district Green Ponds (because it had green ponds). Two years later Anthony Fenn Kemp, a soldier-merchant, settled in the district. Kemp acquired 4,100 acres where he developed an infant wool industry, bred horses and cattle, and introduced a hardy, North American variety of corn. Not surprisingly, in the late 1840s the settlement became known as Kemp Town which later was reduced to Kempton.

The best way to enjoy Kempton is to get out of your car at Dysart House (at the Hobart end of town) and walk northwards. Each building has a sign which provides a very detailed description of its historic origins and its changing use.

Dysart House
Recently owned by the Sydney bon vivant, Leo Schofield, when this historic and impressive old coaching inn went on sale (offers over $1.6 million, it sold for $1,150,000 on 6 October, 2012), the real estate agents provided wonderfully detailed, up to date, information

"The double storey sandstone masterpiece is in the finest condition of its long and colourful life ... a life that started in 1841 as a coach staging post for travellers on the road between Hobart and Launceston. The 22-room mansion has a hipped roof, 12-paned double hung windows, string course, moulded cornice and a projecting central bay with lower storey classical columns over the entrance. AND what a grand entrance it is.

"Almost exclusive use of Australian cedar gives Dysart House a luxurious feel of homely elegance, combined with the grandeur of the period. The dining room, sitting room, library, office and second floor living room, though spacious, magically retain a fine sense of intimate quality living. The ground floor kitchen is large and well equipped adjoining a store room with a large wine cellar sited below the kitchen.

"The bedrooms have beautiful cedar window furnishings with generous en suites and in addition to the vibrant throbbing nucleus of the house, presently used as the easily managed principal living areas, there are two wings, one of which has two large bedrooms, the other boasts a games room plus two smaller bedrooms.

"The outbuildings contain a laundry and a smart self-contained caretaker’s cottage grouped around a large courtyard. Standing apart is another large fine heritage building containing the old coach house, now used as a four car garage, stables with horse boxes and a large workshop area. The property stands on 5.811 hectares ( 14.35 acres) divided into two large fields and two smaller paddocks. The one acre garden is stocked with young fruit trees." Not surprisingly it is recognised as one of the finest coaching inns on the old Midlands Highway.

Congregational Church & Cemetery
The excellent plaque outside this very simple stone Georgian church explains: "The Congregational Church was built in 1840 by the Van Diemen's Land Missionary Society at a cost of £500, under the leadership of the Reverend Joseph Beazley. He had chosen Green Ponds as the headquarters for the district with chapels also at the Hunting Ground, Bagdad and Richmond. Reverend Beazley worked tirelessly to build up a large congregation. A Sabbath school was instituted, for which additions were made to the rear of the chapel creating a school room, meeting room and vestry. In 1840, many of the 'Canadian Rebels' working at the Green Ponds Probation Station attended here and Reverend Beazley was 'much pleased with them'. The cemetery contains the graves of many of the early settlers of Green Ponds, including Phillip Pitt, William Henry Ellis and Joseph Johnson."

St Mary's Church of England
Located in the main street and National Estate listed, St Mary's Church of England is a sandstone Gothic Revival building. The foundation stone was laid in 1839 and the church was consecrated in 1844. It is thought that the famous convict architect, James Blackburn designed the church "in the Gothic Revival style and features lancet windows (the small ones at the front are concreted up), including groups of three lancet windows at the building’s east and west, buttresses, and a pointed arch door and doorway. The square tower is unfinished, resulting in the bell being housed in a smaller structure on its top. Surprisingly, this addition has three Romanesque semi-circular arches on each side rather than the Gothic pointed arches used elsewhere on the building." For more details check out Medievalism in Australian Cultural Memory (http://ausmed.arts.uwa.edu.au/items/show/1215).

Fernleigh
The elegant house known as 'Fernleigh' "was built in the 1830s by Thomas Gorringe, a free settler who was granted 800 acres by Governor Macquarie in 1821. Gorringe was a doctor who left a large medical practice in Brighton (England) to seek his fortune and provide for his large and increasing family." He used the house as his surgery and for brewing ale. It is now an impressive private residence.

Green Ponds Probation Station
By 1828 Green Ponds Probation Station had been established at Kempton as part of Governor Arthur's chain of military posts designed to protect settlers from the increasingly aggressive actions of the local Aborigines. By 1837 a party building the Constitution Hill Road were probably living at the site and the stone cottage on the right of the War Memorial was probably the Superintendant's residence. It is known that at Green Ponds the conditions were hard for the convicts. There were no fireplaces. Fever was common. Food was scarce or taken by the overseers. And consequently the convicts often escaped and stole food from the surrounding gardens.

The Green Ponds Probation Station plaque explains: "The most famous convicts to have been stationed here were the 'Canadian Rebels' in 1840. These men, mostly in fact Americans, had been sentenced to transportation following an unsuccessful uprising against the British in Canada. By this time a method of dealing with convicts known as the 'Probation System' was in effect and the Canadians were sent to a series of Probation Stations ending up here in September 1840. Many of the Canadian prisoners kept journals, thanks to which we have descriptions of conditions at this station. As well as the usual business of quarrying and breaking stones for roadmaking, some of the more highly skilled Rebels helped build the Kempton Bridge and St Mary's Church."

Wilmot Arms Inn
Located in the main street, the Wilmot Arms Inn (1844) was built by convicts and operated as a licensed inn until 1897. It is said that the proprietor suddenly got religion, stopped making alcohol and fed all his spirits to the pigs. From 1897 it became a private residence. It fell into disrepair but was restored in 1978.

Kent Cottage
Located at 121 Main Street, Kent Cottage has had a chequered career. It is reputedly the oldest shop in Kempton having been built in 1843 by George Wood and sold a few years later to Elizabeth Mayhew who ran it as a shop until 1881. It was sold to George Lumsden who ran it as a grocery, drapery and ironmongery. In 2014 it was open every Sunday from 9.00 am - 4.00 pm for a special morning and afternoon tea.

Silhouette Trail
Running between Kempton and Oatlands is a collection of nineteen black steel cut-outs known as the Silhouette Trail. The first, at Kempton, depicts a stage coach on the road north from Hobart Town. Others, which are well worth stopping and inspecting, include depictions of stage coaches in full flight, bushrangers, sheep farmers, gold-panners, surveyors, convict road gangs, railway workers, soldiers, a hangman, emus and Tasmanian Tigers. It is an unusual and original way to depict the early history of the area. Check out http://www.heritagehighway.com.au/o/attraction/monument/shadows_of_the_past_silhouette_trail#.VIS-2osniS0 for more details.

Anthony Fenn Kemp - the namesake of Kempton
Anthony Fenn Kemp, the son of a merchant from Aldgate in London, arrived in Australia in 1795 as a lieutenant with the New South Wales Corps. He became the Treasurer of the Committee of Paymasters which resulted in him acquiring a reputation as a bully and a profiteer. He left Sydney Town in 1815 and arrived in Van Diemen's Land in January, 1816. By 1817 he had been granted 700 acres (283 ha) at Green Ponds - now Kempton. It was the first grant in the area and by 1829 he had expanded it to 2,000 acres (809 ha). Shortly afterwards he added another 1,100 acres and leased another 1,000 acres. It was here that he established and developed Tasmania's infant wool industry, bred horses and cattle, and introduced a hardy, drought resistant, North American variety of corn. He is often referred to as the 'Father of Tasmania' but this seems to be more to do with the fact that his family (who married extensively into the upper echelons of Tasmanian society) consisted of seven sons and eleven daughters.

* Prior to the arrival of Europeans the area around Kempton was the home of the the Paredarerme Aboriginal people.

* The first settlers arrived in the area in 1814. At the time it was known simply as Green Ponds.

* In 1816, Anthony Fenn Kemp settled in the district. He soon became a hugely important land owner and the town, firstly as Kemp Town and later as Kempton, was named after him.

* In 1828 a military station was established as part of Governor Arthur's chain of military posts.

* In 1837 the Green Ponds Probation Station was established.

* It is not surprising, given the size of Kemp's holdings, that Green Ponds was renamed Kempton in 1840.

* In 1840 a group of Americans known as the 'Canadian Rebels' were sent to the Green Ponds Probation Station.

* The Green Ponds Probation Station was closed in 1841 and turned into a Police Headquarters.

* In 1880 Green Ponds municipality paid over £300 to build the Council Chambers next to the Green Ponds Probation Station.

* After receiving a donation of £500 the Presbyterian Church was built on land donated by James Hadden of the Grange.

There is an excellent blog which deals with most of the important buildings in the town. Check out http://ontheconvicttrail.blogspot.com.au/2013/01/kempton.html. It is well written and informative. Well, it should be. It uses a lot of the information I collected in 1988. 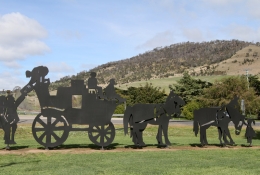 The stage coach silhouette, the start of the Silhouette Trail on the Heritage Highway, outside Kempton. 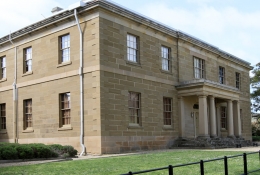 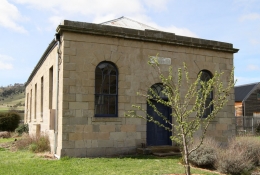 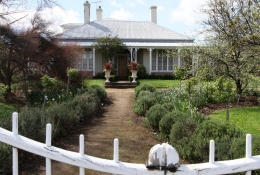 Fernleigh, built by Dr Thomas Gorringe in the 1830s. 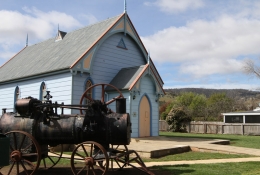 Blue Place Community Hall with an ancient steam engine in the grounds. 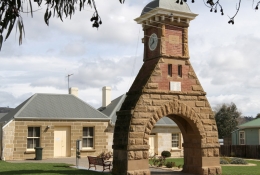 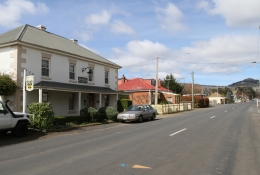 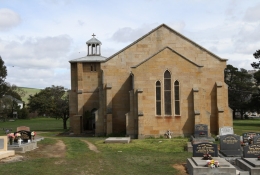 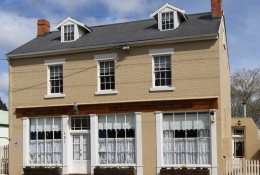 Kent Cottages (1843) - once the longest running shop in Kempton.