Hinterland town behind the Sunshine Coast.

Kenilworth is one of those charming rural towns where chic coffee shops and cafes; the opportunity to buy excellent cheeses from the Kenilworth Country Food and Cheese Factory; the delightful rolling hills of the Conondale and Blackall Ranges; and excellent bush walking, gem fossicking and fishing in the creeks for bass, perch, cod and mullet; all combine to give the town and district an ambience which is both fashionable, environmentally sensitive and rustic.

Kenilworth is located on the edge of the Conondale National Park 139 km north of Brisbane via the Bruce Highway and 33 km west of Nambour via Mapleton and the Obi Obi Road.

The Scottish influence in this area of Queensland is pervasive. Kenilworth was named after a novel of the same name written by Sir Walter Scott. Apparently a grazier named Richard Smith was running cattle on the banks of the Mary River and at the time his wife was reading Kenilworth. Hence the name of the property which became the name of the town.

Kenilworth Country Food and Cheese Factory
A near-perfect example of the initiative of a small community, the Kenilworth Country Food and Cheese Factory was established by the Kraft Corporation in 1950 to produce bulk cheese which was sent to the Kraft factory in Victoria. In 1989 Kraft decided to close the factory but two workers - Colin Cunningham and Clem Hassell -  decided that it was still viable and managed to persuade people that it should be bought from Kraft. The result is a fine, boutique cheese making factory in the heart of Queensland's dairy district. The specialities are Roma Malling and Malling Red which were created in the early twentieth century by a Darling Downs master cheese maker known affectionately as 'Poppa' Hansen. They are a rarity: genuine Queensland cheese. Check out http://www.kenilworthcountryfoods.com.au. They are located at 45 Charles Street, tel: (07) 5446 0144.

Strangler Cairn by Andy Goldsworthy
Andy Goldsworthy is one of Britain's most highly regarded living sculptors. His work can be described as "site specific sculpture and land art" and Wikipedia accurately explains his work as "The materials used in Andy Goldsworthy's art often include brightly coloured flowers, icicles, leaves, mud, pinecones, snow, stone, twigs, and thorns. He has been quoted as saying, 'I think it's incredibly brave to be working with flowers and leaves and petals. But I have to: I can't edit the materials I work with. My remit is to work with nature as a whole.'

"Goldsworthy is generally considered the founder of modern rock balancing. For his ephemeral works, Goldsworthy often uses only his bare hands, teeth, and found tools to prepare and arrange the materials."

He was invited to Kenilworth and it is here, far into the Booloumba Creek Area, that he found a space in the rainforest and created the Strangler Cairn. What makes it unique and special is that it has a strangler fig growing out of the top and no one knows whether the fig will strangle the sculpture or the roots will break the sculpture, which is made from precisely fitting pieces of rock, so that it splits and falls apart. Will it be ephemeral or eternal?

It is not easy to reach the sculpture. You can drive to it in a 4WD but you will have to cross two creeks in the process. The website says "it is about 12 minutes drive from Kenilworth and a half hour walk to reach the site." For more details ask at the Visitor Information Centre in Elizabeth Street. For a map download at http://www.nprsr.qld.gov.au/parks/imbil/pdf/imbil-conondale-map.pdf.

Fig Tree Walk at Little Yabba Creek
Anyone wanting to experience the rainforest, and particularly the wonderful fig trees, which abound in the area should drive 4km on the Maleny Road out of Kenilworth, cross the bridge and park, walk back across the bridge and mooch around this pleasant 780m circular walk. The visitor passes Moreton Bay figs which are 48m high, giant stinging trees, black bean, white cedar, flooded gum, brown tulip oak, piccabeen palms and numerous ferns and lichens. The birdlife includes such exptic species as wompoo fruit doves, green catbirds, figbirds, brush turkeys, eastern yellow robins, and eastern whipbirds. Most of the walk is on an elevated boardwalk and the signage is detailed and excellent.

Conondale National Park and Imbil State Forest
Located south of Kenilworth, off the Maleny Road, this large state forest lies in the Conondale Range and at the headwaters of the Mary River. It can be accessed by Booloumba Creek Road. It offers walking and driving trails, excellent views, deep ravines, mountain streams, waterfalls, forest scenery and is ideal for swimming, hiking, horse riding and bike riding.

There are five designated walking trails in the park: (1) The Mt Allan Hiking Trail which leads to a fire tower at the 593m top of Mt Allan (2 km return); (2) the Gold Mine Walk Interpretative Trail (5.2 km return), which leads to an old gold mine now occupied by colonies of bats (3) the Booloumba 1 Walk (500 metres one way) which links Booloumba 1 Camping Area and Booloumba 2 Day Use Area; (4) the Booloumba Falls Walk (3 km return), which leads from the top of the falls to a lookout platform over a rock formation known as The Breadknife; and (5) the Peters Creek Walk (500 metres return) which leads down a graded track to a creek with rock pools and cascades. Ask at the Visitor Information Centre for more details. A map is available for downloading at http://www.nprsr.qld.gov.au/parks/imbil/pdf/imbil-conondale-map.pdf

* Prior to the arrival of Europeans the Mary River region was inhabited by the Butchulla aboriginal people who called the river Moonaboola or Numabulla.

* In 1847, the Governor of Queensland, Governor Fitzroy, named the river after his wife, Mary.

* The first Europeans into the area arrived in the 1850s and the Kenilworth homestead was built in 1865 as the main residence on the large Obi Obi pastoral run.

* By the 1890s the area was predominantly dairy farming. The settlers had hoped it would be good for small crops which could be sold to the miners at Gympie but the frequency of floods led them to turn to dairy and cattle. A Kenilworth Farmers Association was formed in 1902 and produce was sent to the Caboolture butter factory (built 1907) for processing.

* The township was surveyed in 1921 and the larger properties were subdivided. A butcher's shop was established in 1924 and the local hall, built in the same year, was showing silent movies by 1926.

* In 1952 Kraft opened a dairy factory which continued to operate until i1989 when it was taken over by a local cooperative. 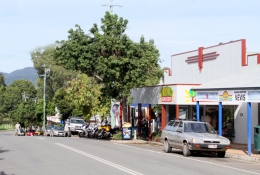 The main street of Kenilworth. 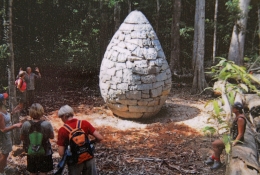 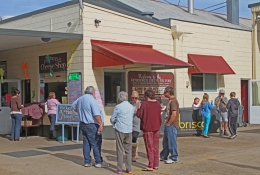 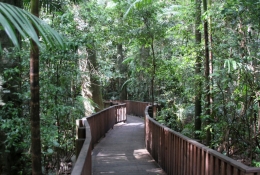