Kerang is a rural service centre situated on the Loddon River. Since the 1860s when river irrigation was introduced to the district it has become an important agricultural centre for dairying, horticulture, vineyards, orchards, lucerne and grain. The town's symbol is a flying ibis. The birds are attracted to the district because there are 50 lagoons and lakes. The result is that the town is a bird lover's paradise with the most populous ibis rookery in the world. An estimated 200,000 ibis using the area for breeding purposes each year. The lakes are also home to thousands of other waterbirds.

Kerang is located 279 km north of Melbourne via the Loddon Valley Highway. It is 78 metres above sea level.

It is believed that the name 'kerang' means either "an edible root" or "the moon" in the language of the local Wemba-Wemba Aborigines.

Kerang Historical Museum
Located at 17 Museum Drive, the Kerang Historical Museum specialises in local history. It features displays of historic farm machinery and the usual remarkable pieces including dentist chairs, printing presses, the first ever x-ray machine in Kerang, wooden hand tools, tractors, typewriters, honour boards and a collection of thousands of photos. The Garret steam engine, which drove the first electric lights in Melbourne at the Centennial Exhibition of 1888, is one of the oldest exhibits. It is open every Sunday from 1.30 pm to 4.30 pm and other times by appointment, tel: (03) 5452 1129. For up to date information check out their Facebook page - https://www.facebook.com/pg/Kerang-Historical-Society-and-Museum-811315905595197/about/?ref=page_internal.

Karlie McDonald Memorial Clock
The impressive memorial clock at the corner of Wellington and Victoria Streets is an unusual memorial. It was established in 1933 to honour a local schoolteacher, Karlie McDonald, who died in 1927 while trying to save one of her students from drowning in the Loddon River. At the time it was reported: "Miss Karlie McDonald, aged 26 years, senior mistress at the Kerang Girls' High School, was drowned in the River Loddon this afternoon. With Mrs. Thompson, another teacher at the school, who is an experienced life saver, she took a party of girls from the school for swimming practice. Miss McDonald was accompanying six girls in a swim over a distance of 50 yards, but when half the distance had been covered, three of the girls got into difficulties, and caught hold of Miss McDonald. She attempted to free herself in order to assist the girls, but they dragged her under the water and struggled until Miss McDonald was exhausted. In the meantime, Mrs. Thompson had noticed the plight of the swimmers, and she rescued the three girls, who were exhausted. Miss McDonald sank before the life saver could make another trip. The body was recovered three hours later in about 12 feet of water." The Maitland Weekly Mercury (NSW), 2 April 1927. For more information check out http://monumentaustralia.org.au/themes/people/tragedy/display/31769-karlie-mcdonald/photo/2.

Lester Smith Lookout Tower
The town's information centre is located in the Lester Smith Lookout Tower. It was an old water storage tower built in 1883 and converted to a lookout in 1973. The Kerang Lapidary Club has a display of local and exotic gemstones in the building. It also offers panoramic views of the area. The tower is located at the corner of the Murray Valley Highway and Shadforth Street. It is open daily from 10.30 a.m. to 5.00 p.m, tel: (03) 5452 1860. For more information check out http://monumentaustralia.org.au/themes/people/government---local/display/31768-henry-lester-smith.

Fishing in the Loddon River and Pyramid Creek
The Loddon River meanders wildly as it passes the town. It contains carp, redfin and Murray cod, golden perch and silver perch as well as small populations of trout and cod. 2 km north of town is Pyramid Creek  which features large carp, yellowbelly and redfin. In 2016 165,000 fish were released into the lakes and rivers in the Loddon Shire. "Newcomers to the sport are advised to look through The Victorian Recreational Fishing Guide for guidance on size and bag limits. The guide is available in hard copy, free of charge, from most tackle shops that sell recreational fishing licences or by calling the Department of Economic Development, Jobs, Transport and Resources on 136 186." Check out http://www.loddon.vic.gov.au/Our-documents/News-and-announcements/Media-releases/2016-releases/Fishing-in-Loddon-Valley for more information.

Kerang Wetlands System
There are over 50 small lakes, swamps and lagoons which lie to the north of Kerang and stretch to Lake Boga. Each spring around 200,000 straw-necked, white and glossy ibis breed in the reed beds. This makes the wetlands the world's most populous ibis rookery. It has been estimated that the birds eat at least five tonnes of insects a day thus helping to protect the local crops from infestation. Interestingly, these waterfowl only breed with the onset of floodwaters and allegedly abandon their nests if the water recedes. The wetlands are also home to thousands of other waterbirds, including egrets, spoonbills, kites, harriers, sea eagles, grebes and heron. The main lakes are just off the Murray Valley Highway to the north-west of town and, as they are readily accessible, they are very popular spots for recreational activities.

Heading North from Kerang
Reedy Lake
The first lake is Reedy Lake which is located 8 km north of Kerang on the Murray Valley Highway. The Apex Park Recreation Area is a popular destination beside the lake. It has a grassy embankment with picnic facilities, a lake beach with shallow water for safe swimming, as well as boating and yachting facilities. It is not noted for its fishing potential and therefore is more for family recreation.

Middle Lake and the Ibis Rookery Bird Hide
Located 10 km north of Kerang is Middle Reedy Lake. There is a sign on the Murray Valley Highway which points visitors to the Ibis Rookery. The lake, with its rich deposits of reeds is the principal breeding ground of the ibis. There is a viewing tower which is best visited in the spring at dawn and dusk when the sky is thick with tens of thousands of ibis leaving and returning to their nests to or from a day's foraging. Apart from the ibis, more than 260 species of bird have been sighted around the lake. It is connected to Third Lake.

Lake Charm
Located 20 km north of Kerang is the tiny village of Lake Charm which, unsurprisingly, is located on the shore of Lake Charm, The lake is a popular water skiing, boating, fishing and swimming spot with boat ramps, tennis facilities, holiday homes, scenic drives and Lake Charm Foreshore Park. It has two caravan parks and camping grounds. Lake Charm is especially noted for its large redfin with the annual Redfin Fishing Classic drawing anglers to the lake.

Kangaroo Lake
Located 7 km past Lake Charm (27 km from Kerang) is Kangaroo Lake where anglers can catch yellowbelly and redfin. It has picnic and barbecue facilities, swimming areas, boat ramps, scenic drives and plenty of waterbirds. Access is via Gorton Drive (named after Prime Minister John Gorton who was born in the area in 1911), off the highway, which is lined with jacaranda trees and citrus orchards. The famous Brown Brothers winery is also located near the lake.

Heading South
Lake Meran
Lake Meran is located 22 km south-west of Kerang which is subject to dramatic changes - it has moved from overflowing to completely dried out in less than a decade. When it has a good supply of water it is a popular spot for fishing, boating, waterskiing, swimming and picnicking beside sandy beaches and surrounded by gracious red gums. It is stocked with trout, cod, redfin and yellowbelly.

Leaghur State Park
Lying to the south of Lake Meran  (32 km south of Kerang) is the entrance to Leaghur State Park (2022 ha) which is known for its outstanding sections of blackbox and red river gum forests. It is a pleasant place for a picnic and walks in the Black Box woodlands are an opportunity to see wallabies, kangaroos, whistling kites, brown falcons, superb fairy wrens, grey-crowned babbler and striped legless lizard. The park has substantial numbers of Aboriginal canoe trees and over 100 sites of archaelogical interest have been recorded. It is possible to head north from the Park Entrance and reach the southern shoreline of Lake Meran.

* Prior to European settlement the Wemba-Wemba Aborigines lived in the district.

* The first Europeans in the area were the party of Thomas Mitchell in 1836.

* In 1848 Richard Beyes opened a public house near a river crossing used by drovers about 3 km south of the future townsite.

* In 1855 Archibald Campbell purchased a pastoral run which he named Kerang.

* In 1857 Woodfull Patchell attempted to purchase land at this settlement. After a dispute over the price he decided to move upriver where he built a bridge, thus drawing traffic away from the downstream site.

* Patchell's buildings became the nucleus of a small village which was proclaimed as Kerang in 1861.

* A road district stretching from the South Australian border was proclaimed in 1862.

* In 1863 Patchell instigated a river irrigation system, probably the first in Victoria, in the district.

* A government Lands Office was opened in 1874.

* In 1876 the Kerang Times and Swan Hill Gazette was first published.

* The town's Mechanics Institute was opened in 1880.

* A tramway to Koondrook was completed in 1888.

* The Torrumbarry Lock and Weir was completed in 1924.

* The local historical museum was opened in 1969.

* Years of heavy irrigation led to salination problems in the 1980s.

* By 1987 a long-term strategy to deal with salination was having positive results.

* The local levee failed in September 2010 and resulted in the area being flooded by the Loddon River.

There is useful information at https://www.visitkerangcohunakoondrook.com.au. 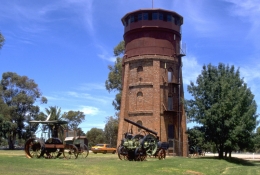 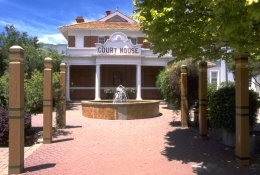 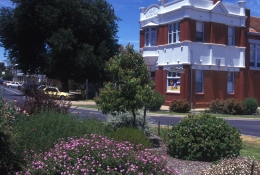 The Old State Savings Bank and the view up Scoresby Street 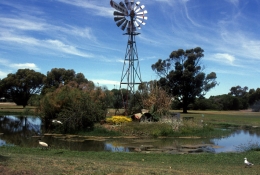 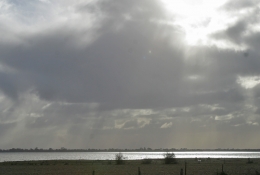 A storm over Lake Charm