Town with impressive marina on the D'Entrecasteaux Channel opposite Bruny Island.

Kettering and Woodbridge are two tiny villages which nestle beside the coast on the D'Entrecasteaux Channel opposite Bruny Island. Historically they started as wild outposts for sealers and whalers who worked the waters around the island and brutally maltreated the local Aborigines. Today the area around Kettering has become a popular place for commuters and people wanting to live an alternative lifestyle. It is only half an hour from Hobart. The rural hinterland is noted for its orchards (apples, cherries, pears) and Kettering has become an important centre for fishing with two major marinas, South Haven Marina and Oyster Cove Marina and a number of smaller, privately owned jetties. Approximately 400 boats are located in Kettering while the Bruny Island Ferry, Mirambeena, runs a regular service from Kettering to the island.

Kettering is located 32 km south of Hobart on the D'Entrecasteaux Channel opposite Bruny Island.

It is believed that Kettering is named after the surname of an early settler.

Oyster Cove Inn
Built in the 1890s by wealthy Queensland grazier, Alfred Cotton, the Oyster Cove Inn, with its excellent views across the Kettering Marina, is the only prestige hotel with accommodation south of Hobart. It is obvious that Cotton, who regularly retreated to Kettering in the summer months, preferred the D'Entrecasteaux Channel to the humidity and heat of his own state. It is located at 1 Ferry Road, tel: (03) 6267 4446.

Woodbridge Marine Discovery Centre
Located at Woodbridge (up the Channel from Kettering) the Woodbridge Marine Discovery Centre at Woodbridge was specifically designed to cater for school children interested in marine biology. "The Centre houses fully equipped teaching areas, an aquarium room, marine pond, touch tanks and lots of displays as well as a large collection of cool temperate marine species. The Centre also has its own 13.5m research vessel, the Penghana, and a marine farming lease. Interactive programs are available for students from Kindergarten to Year 12." For more information check out https://education.tas.edu.au/woodbridge/mdc/default.aspx. The Centre is open to members of the public from 2.15 pm - 4.00 pm on Wednesday afternoons during school term times. Entry is by donation, and volunteers are on hand to answer questions.

Channel Heritage Centre
Located at 1755 Channel Highway, Margate, the Channel Heritage Centre has displays and information relating to life in Kettering and the other D'Entrecasteaux Channel towns. The museum officially opened in 1988. It proudly focuses on the early settlers in the area - the whaler, the timber cutter, the shingle splitter, the bullock driver, the pit sawyer, the early sailing ship and river craft men, the road builders, farmers, orchardists and the scallop and cray fishermen.

* The first European into the area was the French explorer, Bruni D'Entrecasteaux, who travelled up the channel in 1792.

* IN 1795 Lieutenant John Hayes landed at Oyster Cove, explored the area and befriended the local Aborigines.

* By the early 1800s sealers, whalers and timber cutters had moved into the area. The treated the Aborigines appallingly and the local population dropped from an estimated 7,000 to a few hundred in less than a decade.

* Timber cutters and sealers tended to stay for a short time and so the township did not really develop.

* In 1830 Truganini was captured off Oyster Cove.

* Around this time a penal colony was established at Oyster Cove. It was short lived.

* By 1847 Oyster Cove had become the last Tasmanian Aboriginal settlement in Van Diemen's Land. In that year the remnants, now only 44 people, were taken from Flinders Island to the old Penal Colony at Oyster Cove.

* In 1976 Truganini's ashes were thrown to the winds on the D'Entrecasteaux Channel.

* Today Kettering is commuter belt for Hobart as well as being in an area known for apples, orchards and fishing.

There is a useful local website - http://kettering.tas.au/ - with details of accommodation and eating in the area. 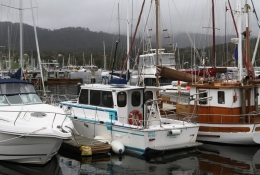 The marina at Kettering on a cold Tasmanian day. 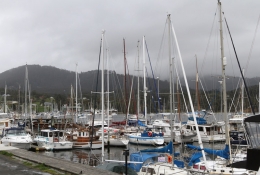 The boats lined up at the Kettering Marina. 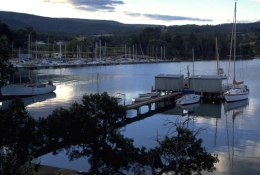 Kettering on the D'Entrecasteaux Channel at sunset. 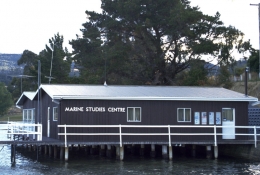 The Marine Discovery Centre at Woodbridge.