Small, pretty town on the edge of the Snowy Mountains.

In autumn, Khancoban, which is nestled under the western edge of the Snowy Mountains, is as beautiful and dramatic as the iconic autumn towns in the area - Tumut, Bright and Canberra. Part of the appeal of the town and the area is the isolation. The Alpine Way, the main road from Jindabyne to Khancoban, was constructed in 1956 as a direct result of the needs of the Snowy Mountain Authority. Prior to that there was a dirt track which had been built in the early 1930s and supposedly followed the route the Aborigines took on their annual pilgrimage to the bogong moth country. The track was so steep (it rose 1800 metres in every 10 kilometres) that even cattle had difficulty using it. Khancoban is very much a Snowy Mountains Authority town serving and maintaining the nearby Murray 1 and 2 power stations and Khancoban Dam. The attraction of the town lies in its access to Murray 1 Power Station (a major attraction) and the beauty and wildness of the surrounding area.

Khancoban is located 547 km south-west of Sydney via the Hume Highway and Tumbarumba or 570 km from Sydney via Canberra and Cooma. It is 300 m above sea level but the Snowy Mountains rise steeply behind it. It is only 13 km from the Victorian border.

The area was originally known as Swampy Plain. In 1876 a post office was opened in the tiny settlement and it was known as Khancoban. There has been much debate over the name which seems to mix the Middle Eastern-Indian subcontinent word "khan" with the unknown "cobin". The most plausible explanation is that "the run, Khancoban, was first taken up by William Guise in 1838. In 1848 it was held by Captain Grant and Captain Trevallyon, both Indian army officers. Colonel Colin Chisholm, the present owner, says that beyond doubt the station was named Khancoban by them. But though he made extensive inquiries in India and elsewhere, and 'khan' stands for ‘Royal’ or ‘an inn’, no explanation of coban can be found, and it is still a mystery.” To this can be added 'khan' can also mean 'home' and that there was once an "old man called Cobban who lived in a derelict hut on site at the time the Indian Army officers took over." That is as close as we will get. For more detailed research check out http://www.anps.org.au/documents/Sept_2009.pdf.
In recent times two people have contributed to this discussion with the persuasive explanation "Khan means royalty in many countries but originally comes from the Turkic language as most leaders had the words kagan or khan written after their name. The word çoban in Turkish means shepherd so it literally translates as 'royal shepherd'." And to add to this "The phrasal word Khan coban, is an Azerbaijani word. Azerbaijan is a country located in Caucus area. Coban in Azerbaijani means Shepherd. Khan Coban means the top Shepherd as in those areas there are multiple shepherds but there is a master of them named Khancoban. A Coban had to earn the title Khan Coban through years of experience and only if people felt like calling them the Khancoban after years. Cobans and Khancobans live in high altitude areas and herd sheep there most seasons of the year as the high altitude vegetation as a food for sheep, brings better tasting and less watery milk."

Murray 1 Visitors Centre and Power Station
The Murray 1 Power Station is located on the Alpine Way, 10 km east of Khancoban. It is open in Summer (October-April) from 9.00 am - 4.00 pm Monday to Friday and 10.00 am - 4.00 pm Saturday and Sunday. In Winter (May-September) it is open in from 9.00 am - 4.00 pm Monday to Friday. There are inspections of the Power Station at 11.00 am and 2.00 pm. The Murray 1 Power Station, the second largest power station in the Snowy Mountains, has a capacity of 950,000 kW. It came into operation in 1966. It was followed by Murray 2, with a capacity of 550,000 kW it is the third largest station, which began operation in 1969. There is also BBQ and picnic areas and the Khancoban Dam can be inspected. For more information check out http://www.snowyhydro.com.au/discover/murray-1-visitors-centre-alpine-way.

* Prior to the arrival of Europeans the district was home to the Jaitmathang, Djilamatang and Walgalu people.

* The district was first settled in the 1830s and known as Swampy Plains.

* In 1848 Guise's property was owned by Captain Grant and Captain Trevallyon, both Indian army officers, who named it Khancoban.

* A track was built in the early 1930s which reputedly followed the route the Aborigines took when making their annual pilgrimage to the bogong moth country in the mountains. The track was so steep (it rose 1800 metres in every 10 kilometres) that even cattle had difficulty using it.

* The road, known as the Alpine Way from Jindabyne to Khancoban, was constructed in 1956 as a direct result of the needs of the Snowy Mountain Authority.

* The town grew dramatically in 1960 when it large numbers of houses were built by the Snowy Mountains Authority for workers building the Murray 1 and 2 power stations and Khancoban Dam and Khancoban Pondage.

* In 1966 the Murray 1 Power Station came into operation.

* In 1969 the Murray 2 Power Station came into operation.

The local Tumbarumba Shire Council website - http://www.khancoban.com.au - has useful information on accommodation and eating in the town. 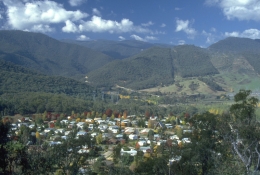 Khancoban township with the foothills of the Snowy Mountains in the background. 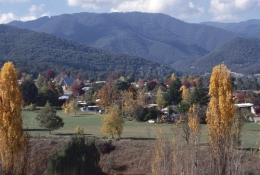 Khancoban in autumn - on the edge of the Snowy Mountains 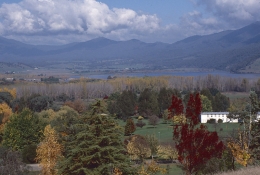 The valley in autumn with Khancoban Pondage in the background. 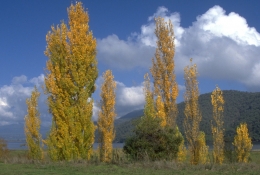 Autumn poplars on the shores of Khancoban Pondage.