Kilcoy is a quiet rural town which services the surrounding district which is known for its beef cattle and, increasingly, its vineyards. Its one significant attraction, and definitely worth stopping for, is the statue of the Yowie. Most Australians have no idea what a Yowie is. The statue goes some way to describing this strange, mythical creature.

Kilcoy is 125 metres above sea level and is located 99 km north west of Brisbane via the Bruce and D'Aguilar Highways.

The brothers, Evan and Colin Mackenzie, who arrived in the district in 1841, took up a substantial landholding and named it 'Kilcoy' (a Gaelic word meaning 'nook of the wood') after their family estate in Scotland.

The Yowie
When I first travelled through Kilcoy in the late 1980s the statue of The Yowie was a simple representation of a very well endowed male creature which had reputedly been sighted in the district. When I returned a couple of years later I noticed that local humorists (and, possibly, people who had been outraged) had turned this rural Queensland equivalent of Michelangelo's David into a eunuch. The Yowie had lost his penis. In an attempt to prevent further vandalism the local shire decided that the mythical monster should remain sexless.
In 1988 the shire's tourist brochure described the yowie (there was a sense of the writer having his or her tongue firmly in their cheek): "Reputed to be half-man half-beast, the Yowie is Australia's equivalent of the Himalayan Yetie (sic) or America's Big Foot and it appears in Aboriginal folk lore dating back thousands of years.
"Official statistics show that over 3 000 sightings were reported throughout Australia between 1975 and 1979.
"Several local timber cutters and farmers claim to have seen the creature in the hills around Kilcoy or have heard of it through legends that have been around for generations.
"Print and electronic media made much of the latest reported sighting in Kilcoy in December 1979. Two Brisbane school boys claim the monster stood just 20 metres from them while they were on a pig shooting expedition 4 km north of the town.
"They described the beast as being about 3 metres tall with a 'Kangaroo appearance' and covered in chocolate coloured hair. They said it took giant 'thumping' strides which could be heard for hundreds of metres.
"Following this incident the Shire Council commissioned a Birchwood statue to be carved and the artist's interpretation of the boy's description now stands tall in all his naked masculinity in Yowie Park beside the D'Aguilar Highway in Kilcoy.
"Visitors from around the world now pause in Yowie Park to picnic, photograph and ponder about the giant monster while others set off on a mammoth YOWIE HUNT!!!"
Today the poor Yowie stands next to a barbecue and there is a picture beside the statue which allows visitors to put their head into a hole and be photographed as a Yowie. Oh, yes, and as you can see from the photographs the old de-membered Yowie has been replaced by a new, neutered Yowie. Sad!
The lagoon behind - the Fred Greensill Lake - is an ideal place for a quiet picnic.

Hall of History
Located near the Fred Greensill Lake and beside the statue of the Yowie on Hope Street, the Hall of History is contained in St Mary's Anglican Church which was brought to the park in 2007. It contains extensive photographic and written records of the history of the town and district. It also includes oral histories recorded with longtime local residents.

Court House Art Gallery
Located at 35 Hope Street, the Kilcoy Courthouse Art Gallery, opens Thursday to Monday from 9.00 am - 1.00 pm, tel: (07) 5497 2000 and check out http://kilcoyart.org.au/ for details of exhibitions. It is housed in the old Court House which was built in 1910 and relocated to the park in 2011. Every three months there is a new exhibition as well as art works from local Somerset artists.

Somerset Dam
Located 10 km south of Kilcoy is the Somerset Dam, named after local MP Henry Plantagenet Somerset, which was started in 1935. It was first used to supplement Brisbane's water supply in 1943 and it was completed - with a 305 metre dam wall - in 1959. The dam has 237 km of shoreline, a catchment area of 340 square kilometres, an area of 8,100 hectares and a storage capacity of 904,000 megalitres. It extends 56 km upstream from the dam wall. Today the dam supplies water to Brisbane, Logan, Ipswich, Redcliffe, the northern end of Gold Coast City, and the shires of Beaudesert, Esk and Kilcoy.
The drive from Kilcoy to Esk around the foreshores of Lake Somerset is a wonderland of hidden valleys, bushland and quiet rivers. The lake is ideal for barbecues, boating, camping, canoeing, fishing, jet skiing, kayaking, sailing, swimming and walking.
There are excellent viewing points and picnic places around the edge of the dam. There is also an attractive drive which can be taken by crossing over the river south of Somerset Dam and heading towards Wivenhoe. For more information check out https://www.queensland.com/en-au/attraction/somerset-dam.

Woodford and the Woodford Folk Festival
Woodford is located 21 km east of Kilcoy. Over twenty years ago the justifiably famous Maleny Folk Festival, which had started in 1987, moved to Woodford where it is now recognised as the largest music and lifestyle festival in Australia. It is held each year over the New Year's Eve weekend starting on December 27 and reaching a climax on January 1. The festival attracts up to 100,000 people, more than 2,000 performers and includes as many as 450 acts at 35 different venues, along with films, dance, street theatre, parades, workshops, drum-ups, folk medicine, craft workshops, a truly spectacular closing ceremony on New Year's Eve, as well as hundreds of stalls selling food, clothing, crafts, musical instruments, and all things alternative. Check out http://www.woodfordfolkfestival.com.

* Prior to European settlement the area was occupied by the Jinibara Aboriginal people.

* The first name given to the region was Hopetoun after Captain Louis Hope, an early settler.

* In 1841 Evan and Colin Mackenzie began grazing sheep in the area. They named their property 'Kilcoy' after the family estate in Scotland.

* In 1842 somewhere between 30 and 60 Aborigines from the Gubbi Gubbi group were killed when they were given flour laced with poison - probably strychnine or arsenic.

* In 1849 Kilcoy property was sold to Charles A. Atherton who, in turn, sold it on to Captain Louis Hope in 1849. Hope built the Kilcoy Station homestead which is located 6 km north east of Kilcoy and is listed by the National Trust. Hope stayed in the district until his death in 1900.

* By 1877 a timber mill had been established in the district.

* In 1892 the Hopetoun Post Office opened and the local school was established.

* In 1913 the railway reached Kilcoy. It prompted rapid growth in the district.

* By 1953 the Kilcoy Pastoral Company had established a local meat works.

* In 1994 the first festival, known as the Maleny Folk Festival Woodford, was held at Woodford.

There is an excellent local website https://www.experiencesomerset.com.au - which has some useful information. 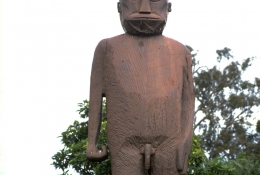 The rather well-endowed Yowie in the park in Kilcoy as he was in 1988. 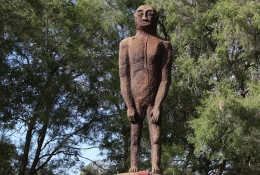 The neutered Yowie in Kilcoy in 2014. 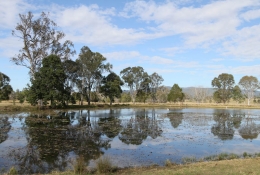 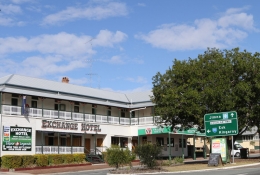 The Exchange Hotel in Kilcoy