Kilkivan is a small town nestled in the eastern slopes of the Great Dividing Range and on the bank of Wide Bay Creek. Historically it boomed during a brief goldrush - the area is rich in minerals - but today it is a quiet rural centre, with attractive parks and interesting heritage buildings, which services the beef and cattle farmers in the surrounding district.

Kilkivan is 158m above sea level and is located 218 km north of Brisbane via the Bruce and Wide Bay Highways. It is 50 km north-west from Gympie on the Wide Bay Highway.

Kilkivan takes its name from the 1600 acre selection which was named by John Daniel MacTaggart. MacTaggart called the property Kilkivan because he had been born in Campbeltown, Argylshire, Scotland and there was an adjacent parish named Kilkivan. Today Scotland's Kilkivan is located in the Scottish council area of Argyll and Bute.

Mount Clara Copper Smelter and Chimney
There are a number of excellent cards/brochures available at both the Kilkivan Museum and the nearby cafe. There is one on "The Chimney" which explains that "This is what remains of a once active copper mine and smelting venture. In 1871 payable lodes of copper were discovered in the Mount Clara and Mount Coora areas. The Mt Clara copper mining venture was formed in 1872 at Maryborough with a registered capital of £20,000. Production probably started later in 1872 ... the operation was short lived and by 1875 all the mines and smelters in the area were closed."

The National Estate assessment of the old copper mine ruins adds: "To process the ore eight reverbatory furnaces were built, the remains of which include a collapsed reverbatory furnace, fragments of railway line used to carry timber to the furnace, and a chimney 16.5 metres high. The chimney is constructed of locally hewn stone of pleasant colour and texture and bonded with clay mortar. The site is notable for the absence of modern intrusions and as a relic of early mining activity in the area."

Access to the chimney is via Wide Bay Highway (east of Kilkivan) and approximately 15 km up Rossmore Road. It is said to be the last one of its type left in Queensland.

Kilkivan & District Museum
The Kilkivan & District Museum is also the town's Visitor Information Centre. It is located in the main street at 12 Bligh Street and, apart from the actual museum, there are eight buildings including an early business premises; a railway fettler's cottage; a railway cream shed; an outside pan toilet; a slab laundry and a slab shed constructed using slabs from many historic homesteads; a stockman's hut and the Oakview Forestry Barracks which houses a bottle and mineral display.

The Museum opened in its present building - the Rise and Shine Cottage - in 1981. The Cottage is named after the alluvial gold field which was discovered at the eastern end of Bligh Street in 1874. The Museum collection comes from all parts of the District including Kilkivan, Goomeri, Woolooga, Widgee, Tansey and Booubyjan. The museum prides itself in its hands-on activities which visitors can participate in. There is  butter making, bean slicing, orange juicing, corn cracking, pen and ink writing and writing on slates.

The Museum also houses a large collection of documents and photos which can assist family researchers, and is always on the lookout for additional photographs of the District to collect or copy.  It is open from Tuesday to Saturday from 10.00am - 3.00pm and can be opened at other times by appointment.

* Prior to European settlement the area around Kilkivan was inhabited by the Waka Waka people for tens of thousands of years.

* The first European settlers arrived in the area in the early 1840s but they were met with resistence from indigenous inhabitants. There is evidence that a settler named Sheridan tried to settle in the area but was repulsed by the Waka Waka who killed two of his shepherds and large numbers of his stock.

* Eventually a Scot named John Daniel MacTaggart who had been born in Campbeltown, Argylshire, Scotland MacTaggart selected 1600 acres which he named Kilkivan after a parish near his home town.

* European settlement of the area was slow until 1868 when a gold reef, the Rise and Shine was discovered. Immediately miners poured into the area. By late 1868 the town (which had briefly been called Rise and Shine) had a population of 2,000 miners serviced by grog shanties, four hotels, and several general stores. The best find on the field was a nugget weighing 75 ounces. By 1872 the gold had run out.

* The Black Snake cobalt reef was discovered in 1874. It sustained the town's economy until 1902. During that time a school was built (1876), Union, Anglican and Catholic churches were completed between 1880-1888 and a branch line connecting to Maryborough  and Gympie was opened on 6 December, 1886.

* In 1911 Kilkivan Station was resumed by the government and broken up into smaller holdings.

The local Tourist Information Centre operates from the Kilkivan Historical Museum in the main street.

South Burnett Tourism has a website which includes Kilkivan - see http://tourism.southburnett.com.au/townkilkivan.htm - and the University of Queensland site has good historical information about the district - http://queenslandplaces.com.au/kilkivan-and-kilkivan-shire. 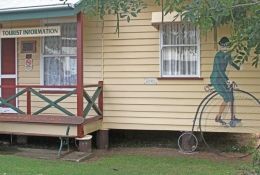 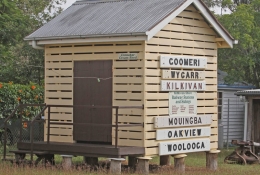 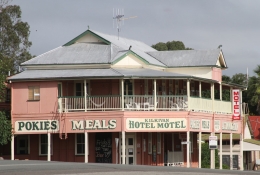