Town surrounded by waterfalls and near the source of the Condamine River.

"Named like so much else in Australia for a place on the far side of the globe that its founders meant to honour and were piously homesick for, Killarney bears no resemblance to its Irish original. It is lush country but of the green, subtropical kind, with sawmills in untidy paddocks, peak-roofed weatherboard farms, and on the skyline of low hills, bunyah pines, hoop pines and Scotch firs of a forbidding blackness. Tin roofs flare out of an acre of stumps. Iron windmills churn. On all sides in the wet months there is a flash of water." is how the acclaimed novelist, David Malouf, described this small town on the banks of the Condamine, in his 1984 novel Harland's Half Acre.

Apart from the very impressive old Queensland hotel in the main street, the appeal of Killarney lies in the natural features around the town: The Falls Drive - with the excellent Queen Mary Falls, Daggs Falls and Browns Falls - and the start of the Condamine River, the longest river in Australia.

Located 190 km south-west of Brisbane and 33 km east of Warwick, Killarney is only six kilometres from the New South Wales border. It is 515 m above sea level.

"Named like so much else in Australia for a place on the far side of the globe that its founders meant to honour and were piously homesick for, Killarney bears no resemblance to its Irish original." No one knows for sure why it was named after Killarney in Ireland but there was a Killarney Station which was an outstation of Canning Downs.

The Condamine River at its Source
It would be reasonable to expect that the source of the Condamine would be nothing more than a creek on the outskirts of Killarney but if you drive down the main street and stop on the far side of the bridge you will quickly realise that the town celebrates its association with the famous river. There is sculptor Lana Tyacke's sensuous sandstone "Eternal Flow" work which, as the plaque states, is "A prayer for a clean flowing river system from Killarney through to the Murray River, out to the Southern Ocean." and beside it a proud sign "Condamine River - start of the longest river system in Australia". Pause for a moment and reflect on how vital this river is to this very dry continent and, if you arrive towards evening or in the early morning, you may also see a platypus.

The route known as The Falls Drive starts at Browns Falls, an easy walk from the parking lot, where it is possible to walk behind the falling water. In the park below Browns Falls there is a sculpture by Luke Zwolsman titled "A Space for Contemplation". Further up the Falls Drive, and the most accessible of all the falls, is the 38-metre Daggs Falls and, as you climb up the mountain (there are excellent views across the hinterland) you eventually reach the horseshoe-shaped Queen Mary Falls. There is an extensive picnic area and a cafe. The two walks to the falls are a 15-minute circuit walk (you don't really get a good view of the falls) or a 40-minute walk where you cross over the Condamine - it is just a small stream here - on a bridge below the falls. The views are excellent. The end of the Falls Drive, 14 km from Browns Falls, is Carrs Lookout where you can see the start of the Condamine River.

In this idyllic bushland, particularly around Browns Falls and Queen Mary Falls, it is possible to see echidna, spotted-tailed quoll, red-necked pademelon, red-legged pademelon, bandicoots and numerous species of possums, gliders and flying-foxes.

* Killarney was part of the first European settlement of the Darling Downs. It was an outstation of Canning Downs which was first settled by the Leslie Brothers in the 1840s.

* The major settlement of the district occurred in the 1850s when cedar cutters moved into the district. By 1867 the Killarney Inn was providing liquor and over the next decade the settlement added a general store, a police station and a blacksmith.

* South Killarney was surveyed in 1878

* a railway line arrived from Warwick in 1885 and the town moved across the river to the north side of the Condamine.

* 'A flash of water', an exceptional cyclone, raged through the town on 23 November, 1968 and destroyed many of the town's historic buildings. One person was killed and two hundred of the town's 247 buildings were destroyed.

The town has a useful website. Check out http://www.killarney.org.au and the University of Queensland site - http://queenslandplaces.com.au/killarney - has useful historic information. 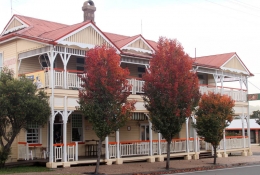 The Killarney Hotel in the main street of Killarney 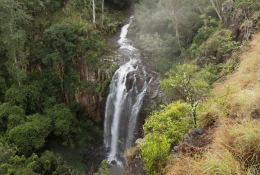 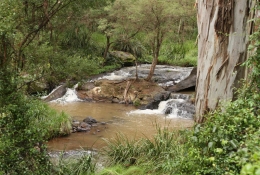 The stream above the Queen Mary Falls on the Falls Drive. 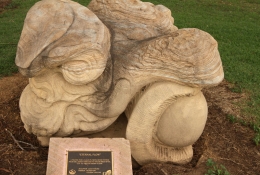 Eternal Flow - the sculpture at the beginning of the Condamine River created by Lana Tyacke. 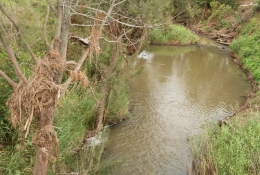 The start of the great Condamine River system - Note the remnants of the last flood high in the branches of the trees. 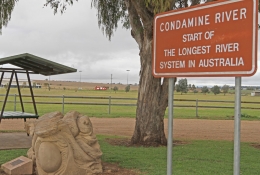 The sculpture and sign noting the start of the great Condamine River - the longest river system in Australia.