Kilmore is reputedly Victoria's oldest inland town. Over the past 40 years, as a result of quick access to Melbourne via the Hume Freeway, it has seen the population increase dramatically as it has become a commuter area for the city. Kilmore has an impressive collection of unusual bluestone historic buildings - the gaol, post office and court house are particularly impressive.

Kilmore is located 63 km north of Melbourne on the Northern Highway. It is 370 m above sea-level.

In 1841 William Rutledge surveyed 21 square kilometres and named the settlement Kilmore (Gaelic for "big church") after his Irish birthplace on County Cavan.

Whitburgh Cottage
Located at 10 Piper Street and clearly signposted, Whitburgh Cottage, a simple dwelling, is the town's oldest surviving house. The first two rooms of this bluestone building were erected in 1853 for Scots coach builder and blacksmith William Smeaton whose family lived in the house until 1966. Another two rooms were added in 1857. It is enclosed by a picket fence. The Heritage Register records that " The cottage is one of the oldest surviving buildings in Kilmore, an important early inland town in Victoria. The cottage epitomizes early cottage design with a simple double fronted composition, hipped roof and constructed of local materials, in thick case bluestone." For more details check out http://vhd.heritagecouncil.vic.gov.au/places/627/download-report. It is open from 2.00 pm to 4.00 pm on Sundays or by appointment and features clothing and artefacts from the family.

Post Office
Located at 2 Powlett Street,  the impressive old bluestone Post Office (1861) is listed in the Heritage Register. It is "of architectural importance as one of the first Public Works Department buildings completed under William Wardell's direction as the Chief architect and Commissioner of Works in Victoria from 1860. Wardell was one of the colony's most important 19th century architects and the department he supervised included many other influential architects, including Henry A Williams whose initials appear on the Kilmore Post Office drawings. The former Kilmore Post Office is also important for its ability to demonstrate the rising influence of Italian Renaissance styling in Victoria, a movement which has been directly attributed to Wardell. The Wardell era marked a turning point in Victorian architecture as he re-worked standard public building designs to create more imposing and individualistic constructions." For more information check out http://vhd.heritagecouncil.vic.gov.au/places/1300.

Court House
Located at 4 Powlett Street,  the former bluestone Court House was, as the Heritage Register records, "erected in 1863, was designed by J J Clark under the supervision of William Wardell of the Public Works Department and constructed by Langridge and Co. The building, built of coursed basalt rubble and rock faced basalt masonry, consists of a double height courtroom with a hipped slate roof that is flanked by lower wings and entered through an arcade porch. An attic storey is suggested by windows above the porch roof. Two basalt columns and two pilasters, carry the three arches of the porch: all are executed in dressed stone, contrasting with the rock face masonry behind. Three pairs of double doors, originally solid, and now half-glazed open from the porch: semi-circular fanlights surmount each pair. The building's style is evocative of the Italian Renaissance, sometimes referred to as the Victorian Romanesque style of architecture. Alterations were carried out on the building in 1888." For more information check out http://vhd.heritagecouncil.vic.gov.au/places/626/download-report.

Bindley House
Located at 20-22 Powlett Street, Bindley House is an imposing two-storey bluestone residence which was built c.1862 for a local doctor, Frank Lane Bindley. The Bindley House website (it is now a B&B - see http://www.bindleyhouse.com.au) explains that "Bindley House is a classically derived, brick building with hip slate roof and return verandah, which terminates in symmetrical wings at the rear. A substantial bluestone lower ground floor is located at the rear and a bluestone retaining wall supports the front veranda. Distinctive detailing includes panelled timber veranda columns with circle and arch motifs, and a keyhole valance between supports; heavily corniced, stuccoed chimneys with arcaded shafts and paned glazed French doors which lead to the veranda."

Town Hall
The former town hall (1894) is located at 16 Sydney Street. The imposing and decorative facade, with its enormous Corinthian pilasters, indicates that it was originally meant to be a much larger structure. The balustrading is repeated on ground and first floor balconettes and in the crest-surmounted roof parapet. For more information check out http://vhd.heritagecouncil.vic.gov.au/places/69000.

Former Kilmore Gaol
Located at 8 Sutherland Street, the Old Kilmore Gaol was opened in 1859 as a maximum security prison. In 1891 it became a butter factory and a private residence in 1968. It is listed on the Victorian Heritage Register as "of architectural significance because of its basalt construction and because it was built under the supervison of Major-General Charles Pasley, then Commissioner of Public Works. He influenced the design and supervised the construction of such public buildings as Parliament House, Victoria Barracks, Pentridge Prison, the Kew Asylum, the Customs House, the Treasury and the General Post Office." Check http://vhd.heritagecouncil.vic.gov.au/places/68996 for more information.

St Patrick's Catholic Church
St Patrick's Catholic Church (1857-62) is located in Sutherland Street. In 1854 Kilmore became the first Roman Catholic Parish in Victoria outside of Melbourne and it retains a strong Catholic community to this day. The church is noted for its impressive stained glass window - "In 1869-70 a large four light stained glass window “considered one of the best specimens that ever left the manufactory of Ferguson and Urie” was erected in the liturgical east wall of St Patrick’s Catholic Church at Kilmore in Victoria. The window was crafted in Curzon Street North Melbourne by the Ferguson & Urie Stained Glass Company and depicts the Nativity, Baptism, Crucifixion and Resurrection."

St Andrew's Presbyterian Church
St Andrew's Presbyterian Church is located in Hamilton Street. It is a four bay bluestone church which was designed by James Fleury and built in 1864. It has an impressive octagonal stone and timber belfry. It is listed on the Victorian Heritage Database. Check out http://vhd.heritagecouncil.vic.gov.au/places/68970.

Pyalong
Pyalong is a tiny village located 23 km north of Kilmore along the Northern Highway. Its primary appeal is a collection of single-storey buildings on High Street which are collectively known as 'Whitehart' and which were once the White Hart Hotel (1857). The main building has a long veranda of later vintage and the other buildings are gathered around a rear courtyard. The Heritage Council notes of the buildings: "There is a notable and unusually intact example of provincial hotel architecture. The low buildings are indicative of early times. The unusually long facade of the main wing and its canted bay end are distinctive features. The surviving outbuildings are also notable and show evidence of the early use of the buildings. The cast iron veranda (a later addition), the veranda paving and the picket fence enhance the complex and give a picturesque quality. The buildings are an essential feature of this quiet country hamlet." For more information check out http://vhd.heritagecouncil.vic.gov.au/places/68979/download-report.

Trestle Bridge at Pyalong
The timber trestle railway bridge, located across Bridge Street, was built in 1889-90 by McDermott & Sons for the Bendigo to Wandong track to cross Mollison Creek. The line was closed in 1968 and the timber sleepers were removed. It is listed by the Victorian Heritage Council which notes: "The line was important as it was used to supply the Bendigo mines with shaft timbers, and for the transportation of wool and sheep. It is also an example of a rail bridge constructed as a result of the 'Octopus Act' of 1884. The bridge is architecturally significant as a notable example of timber trestle bridge construction, and demonstrates a distinctive and presently rarely used construction method, utilising the best qualities of native bush timbers. It is a typical and substantially intact example of a timber trestle bridge, using stay piles and timber longitudinal girders supporting the rail deck." For more detailed information check out http://vhd.heritagecouncil.vic.gov.au/places/68960.

* The area was inhabited by the Woiwurung people prior to white settlement.

* The first Europeans in the district were explorers Hamilton Hume and William Hovell in 1824.

* European settlement commenced in 1837. Squatters arrived from the north attracted by the agricultural potential of the district's rich volcanic soil.

* Rutledge named the settlement Kilmore (gaelic for 'big church') after his Irish birthplace. An inn opened in 1841.

* When gold was discovered at Chiltern and Beechworth in the early 1850s the town grew rapidly.

* A daily coach service to Melbourne began operating in 1854. That year it became the first Roman Catholic Parish in Victoria outside of Melbourne.

* The settlement became a municipality in 1856.

* The local Court House was completed in 1864. That year the father of bushranger Ned Kelly was convicted of possessing stolen goods.

* By the mid-1860s the town had several hotels, two breweries, two cordial factories, a few sawmills and a gaol, post office, courthouse, hospital, tannery and brickworks. 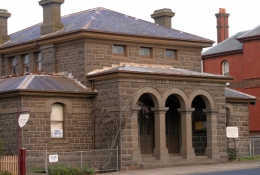 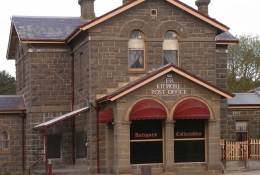 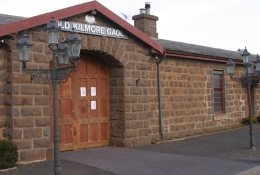