Quiet town nestled in the hills of the Great Dividing Range

Kinglake is a small town at the top of the Great Dividing Range which has, over the years, been decimated by bushfires. It was savagely damaged in the 2009 Black Saturday bushfires when over 500 homes were destroyed and 38 people in the district lost their lives. Consequently today it is a modern town which has struggled to attract visitors.

There are two interpretations of how the town was named. One argues that a surveyor named Alexander Kinglake passed through the area in 1870 and the town is named after him. The other claims that it was named after British historian Alexander William Kinglake, whose eight-volume history of the Crimean War (it was published between 1863-1887) had recently been completed.

Bollygum Playground
Located at 40 Whittlesea-Kinglake Road, the Bollygum Playground is a magical playground created with a theme based around the book Bollygum by Garry Fleming. It was created as a post-Black Saturday community project to help heal a community devastated by death and bushfires and to encourage visitors to return to the township. The Melbourne Playgrounds website (check out https://www.melbourneplaygrounds.com.au/bollygum-adventure-playground-whittlesea-kinglake-rd-kinglake#.XV9oZJMzZBw) describes it as: "Wander along the shady paths and dry watercourse and explore each enchanting element. Start at the Bower Bird's nest with its shiny blue trinkets, then past a large shady sandpit and cross one of the bridges to Platypus's House and make a pretend fire in the huge hearth. Be careful not to scare platypus with the screeching from the music cylinder next to his house. Wander down the shady path, past the log bridges and massive log seat to Wombat's House which has beautiful carved murals on the walls, tunnel slide, spiral slide, distorting mirrors, speak and listen system and lots of unusual equipment to make sounds (not too loud though because Wombat might be snuggled up and sleeping). Stop for a while at the dry creek for a spot of fishing with rods and reels provided. Have a play with the mechanical digger in the big sandpit and then head to an area with lots of traversing elements such as a chain traverse, flying fox, bridge, monkey bars and hanging disks. Head back up the hill to the main structure with Frogmouth's House and a climbing wall, ladders, walkways, wave slide, abacus, rope ladders, thin balance walkway, long high rope bridge for the daring kids, fireman's pole, dual metal slides (with shade sails above) and various fun musical instruments."

Kinglake National Park
Kinglake National Park (23,210 ha) is the largest National Park near Melbourne. Established in 1928 to protect native fauna and flora, it is divided into three sections: one to the south and east of Kinglake, one to the west and one to the north. It is situated on the slopes of the Great Dividing Range and features such popular attractions as Masons Falls, Jehosaphat Gully and Wombelano Falls. The appeal of the park lies in its opportunities for bushwalking, picnics, cycling and nature study. Throughout the year it is a feast of flora and fauna with almost 600 native plant species, 40 native mammals and 90 native bird species. It is particularly impressive in spring when the wildflowers are in bloom.
There are a number of impressive locations in the park:

* Masons Falls Picnic Area is a large picnic area where there are disabled facilities, toilets, barbecues, water and sheltered tables. This picnic area is the start of a number of walking tracks.
Lyrebird Circuit Track (500 m) is an easy shady path (it is suitable for wheelchairs) which includes as its highlights some of the park's tallest trees and has information boards detailing historic and natural features. This is for walkers only.
Boundary Track (2.4 km one way) follows the park boundary from the Masons Falls Picnic Area. It is suitable for walkers and cyclists
Goodenia Track (750 m one-way) moves from the picnic area to the Boundary Track. It climbs gradually through an area that is dotted, in spring, with hakeas. It is open to cyclists as well as walkers.
Masons Falls Walk (700 m one way) is a track which follows Running Creek from the Masons Falls Picnic Area to a viewing platform offering views over the falls and the gorge which is covered with native bush and ferns. The falls are best seen after heavy rains. The Masons Falls track is for walkers only.
Running Creek Track extends southwards from the viewing platform to a point on Mt Sugarloaf Road. It passes through the moist fern gully of Running Creek (inhabited by platypuses, water-rats and lyrebirds) and the drier ridges with their understoreys of heath-like vegetation.
Wallaby Track - the Running Creek Track joins the Wallaby Trail (1.5 km one-way) which passes through messmate and peppermint forests which are populated by koalas. The understorey of grass tree and bracken is inhabited by swamp wallabies. Both the Running Creek and Wallaby tracks are suitable for cyclists as well as walkers.

* Jehosaphat Gully is a cool and delightful fern gully with walking tracks, a picnic area and parking facilities. Lyrebirds are sometimes seen in the gully.

* Wambelano Falls, at the northern end of the park, are larger than Masons Falls. They are located off Captains Creek Road and there is a 1.5 km circuit walking track which winds through a forest of huge old growth trees. The track leads to the falls viewing platform.

* Frank Thomson Reserve is situated at the highest point in the district and it offers a panoramic view over the Melbourne skyline and Port Phillip Bay. It is adjacent to the Kinglake-Whittlesea Road about 1.5 km north-east of Kinglake.
For further details check out http://parkweb.vic.gov.au/__data/assets/pdf_file/0008/520586/Map-Kinglake-NP.pdf which includes a downloadable map of the park and all its walking tracks.

The Singing Gardens of C.J. Dennis and Tea Rooms
Located at 1694 Healesville-Kinglake Road, Toolangi (16 km east of Kinglake) are the Singing Gardens of Australian poet C.J. Dennis who lived at Toolangi from 1908 until his death in 1938. While at Toolangi Dennis published The Songs of a Sentimental Bloke (partially written at Kallista and published in 1915), The Moods of Ginger Mick (1916) and The Glugs of Gosh (1917). With the royalties from The Songs of a Sentimental Bloke he bought the house and was married in 1917.
Dennis's last book, The Singing Garden (1935), was inspired by the garden. The garden he created with his wife covers 1.5 ha and features rhododendrons, azaleas and exotic trees including a copper beech planted by English Poet Laureate John Masefield who visited Dennis during Victoria's centenary celebrations. The site is now a combination of gardens and tea rooms where Devonshire teas and light lunches are served. It is closed during the winter months and opens for spring, summer and autumn. Open Saturday and Sunday from 10.00 am to 4.00 pm, tel: (03) 5962 9282. Check http://thesinginggardens.com.au for additional information. And check if it is open. Don't go unless you know it is going to be open.

* In 1861 gold was discovered at Moore's Rush and Mount Slide.

* By 1863 the prospectors had moved out of the district.

* In 1878 the surveyor Alexander Kinglake surveyed a track from St Andrews to Glenburn.

* The Kinglake Primary School was opened in 1879.

* The primary school at Kinglake West was opened in 1896.

* The primary school at Kinglake Central opened in 1898.

* During the 1890s the district established a reputation for its excellent orchards.

* A timber tramway from Kinglake to Whittlesea was opened in 1911.

* In 1926 most of the buildings in the town were destroyed by bushfires.

* By 1928 the Kinglake National Park had been proclaimed.

* By the 1950s the area was known for its potato production.

* In 2006 the district was hit by serious bushfires.

* In 2009 Kinglake was decimated by the Black Saturday bushfires with more than 500 homes destroyed and 38 people killed in the district. The bushfire destroyed the Anglican and Catholic churches.

* In 2014 the Black Saturday bushfire survivors received $494 million in a class action settlement.

There is no Visitor Information Office in the town. 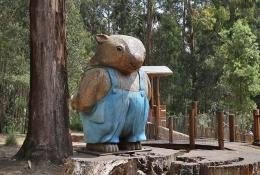 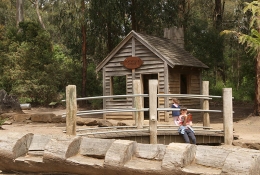 Children playing outside the Platypus House in the Bollygum Playground 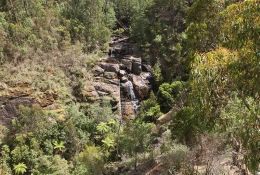 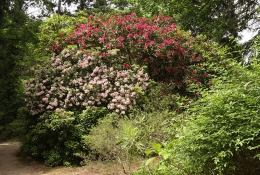 The Singing Gardens of C.J. Dennis 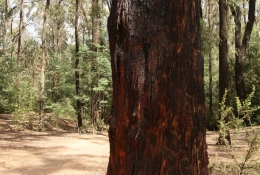 A blackened trunk at the Kinglake National Park 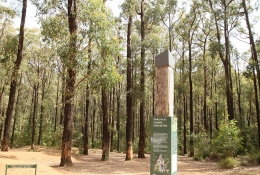 The blackened tree trunks, from the 2009 bushfire, at the Kinglake National Park