Kings Canyon is the dramatically beautiful landmark which draws tens of thousands of visitors to the Watarrka National Park each year. This is hardly surprising as the canyon walk, and the shorter Kings Creek walk, offer some of the most spectacular scenery in Central Australia.

The drive along Luritja Road to Kings Canyon hugs the southern side of the low lying but ever-rising George Gill Range. By the time the visitor reaches Kings Canyon the range has risen over 100 metres. The intensely red, sheer canyon walls, which rise above Kings Creek, are particularly spectacular at sunrise and sunset. The canyon has water holes of great beauty and the walk around the canyon rim includes features like The Lost City (a formation not dissimilar to the Bungle Bungles in Western Australia) and the verdant Garden of Eden. The remarkable Watarrka National Park contains over 600 different species of native plant because, uniquely, it combines the flora of the Western Desert with the more varied flora of the MacDonnell Ranges and the harsh vegetation of the Simpson Desert.

Kings Canyon is located 321 km southwest of Alice Springs via Larapinta Drive (unsealed sections and 4WD only) or 474 km on sealed road via the Stuart Highway, Lasseter Highway and the Red Centre Way.

Kings Canyon takes its name from Kings Creek which was named by the explorer Ernest Giles when he passed through the area in 1872. In his book of the journey, Geographic Travels in Central Australia from 1872 to 1874, he writes: "I called King's Creek after Mr. Fielder King ... an old and kind friend of mine."

Kings Canyon Walking Trails
There are five main walks in Watarrka National Park. Each one needs to be taken with caution, as there are degrees of difficulty, created by both daytime temperatures and by steep ascents, which seem designed to ensure that only genuinely fit walkers attempt them.

(1) The easiest is the Kings Creek Walk (2.6 km, one hour return). It runs from the main car park up the creek bed to a lookout point on the left hand side of the valley which affords an excellent view of the sheer cliff face at the end of the canyon. Even if you are not fit you can manage this.

(2) If you are serious about seeing the beauty of the canyon then it is the Kings Canyon Rim Walk (6 km in a loop and it takes about 3-4 hours). It includes both the Lost City which is a series of weathered buttresses which look like miniatures of the Bungle Bungles and the lush vegetation and waterholes of the Garden of Eden. Now there is a catch: the first 300-400 metres is straight up an incline so steep that back in the 1980s an English woman had a heart attack and died before she even got to the top. You have been warned. I will admit that I took one look at the incline and headed off the other way (all the literature tells you not to go anti-clockwise) and got to the top, saw the Lost City, was overwhelmed by the beauty of the sheer cliffs of the canyon, and then turned around and headed back. The catch: on the way up I came across a ranger who roundly told me I was doing the wrong thing. It seems they want to put walkers through trial by sheer slope.

(3) Further down Luritja Road is the short Kathleen Springs Walk (2.6 km, about 90 minutes return) which is not part of Kings Canyon but does arrive at a spring-fed waterhole.

(4) For those who are serious walkers there is the Giles Track which traverses 22 km from Kathleen Springs to Kings Canyon along the top of the George Gill Range. The ranger advises that it will take two days.

* Prior to the arrival of Europeans the Kings Canyon area was home to the Luritja people of Central Australia.

* In 1872 the explorer Ernest Giles, "chosen to lead a small expedition to investigate parts of central Australia west of the new overland telegraph line", reached Kings Creek and Kings Canyon. He named them both after his friend Fielder King.

* Kings Canyon became part of Tempe Downs station but there was no road access until 1961.

* The first accommodation in the area was Wallara Ranch which was built by English immigrant Jack Cotterill who bought land from Angas Downs Cattle Station and built the ranch in 1961. It was located 100 km from the canyon. In the first year of operation Collerill took 600 people on conducted tours of the Canyon. The tour of the canyon took a total of three days from Alice Springs. Cotterill died in 1978 and Wallara Ranch was demolished in 1990.

The Northern Territory Parks and Wildlife Commission website - http://www.parksandwildlife.nt.gov.au/parks/find/alice-springs-region/watarrka#.UfsP3mSPfR0 - has a good downloadable fact sheet on Watarrka National Park which outlines all the walks and provides useful maps. 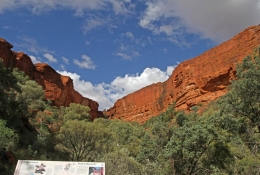 View of the canyon walls from the Kings Creek viewing platform. 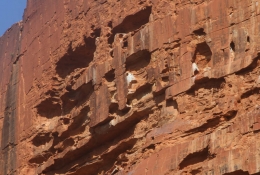 The dramatic weathering on the sheer walls of the canyon. 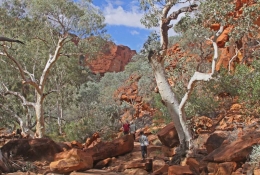 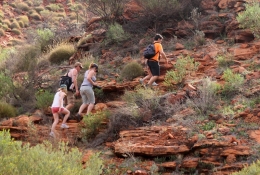 The steep start of the rim walk at Kings Canyon.